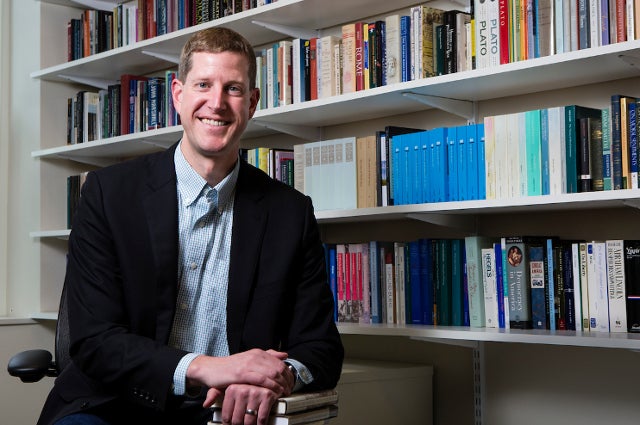 David Hume and Adam Smith were leading thinkers of the 1700s, and their ideas continue to influence us to this day. Hume is considered one of the most important philosophers in English, and his work was a precursor of modern cognitive science, while Smith, the author of The Wealth of Nations, is often called the father of capitalism. They were very different sorts of people, though: Smith was an upright establishment figure, while Hume held radical ideas, not least his open skepticism about religion.

They were also close friends for more than twenty-five years, and their friendship was a source of strength to both. Dennis Rasmussen, an associate professor of political science, had written about both men in two previous books, and was quite surprised when he realized no one had chronicled their enduring friendship.

With his new book, The Infidel and the Professor: David Hume, Adam Smith, and the Friendship that Shaped Modern Thought (Princeton University Press), he sets out to fill that gap with an animated retelling of the two men’s lives and the times in which they lived, the height of the Scottish Enlightenment. Their circle included many influential figures in the world of ideas—even Jean-Jacques Rousseau makes an appearance. The friendship was built on mutual admiration. After Hume died, in 1776, Smith wrote that he approached “as nearly to the idea of a perfectly wise and virtuous man, as perhaps the nature of human frailty will permit.”

Having enjoyed reading books that combine biography with ideas and philosophy, “especially those that do it in an accessible and entertaining way, I thought I’d try my hand at it,” said Rasmussen, who teaches political theory. Tufts Now recently spoke with him about The Infidel and the Professor, which a New York Times reviewer called “touching and illuminating.”

Tufts Now: Why is David Hume such a pivotal figure in the history of philosophy?

Dennis Rasmussen: Hume is widely regarded as maybe the greatest philosopher to write in the English language—certainly, with Thomas Hobbes, one of the two most important thinkers. He’s an interesting figure in that he is a really harsh critic of religion, but also of the powers and capacity of human reason. He’s seen as a skeptic and empiricist, and puts a lot of weight on the importance of intellectual humility, of knowing the limits of the human mind. 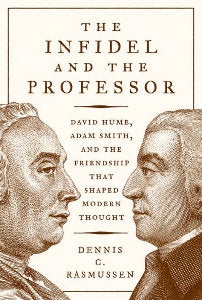 That also goes to the limits of what we can know about god and the afterlife. So in some respects, his is a very modern world view; I think that helps account for his popularity among philosophers today.

Was he an atheist?

I wouldn’t quite say he was an atheist. He was enough of a skeptic to say we don’t know that there’s no god. We shouldn’t be so sure of that. He is more of what we call agnostic, though in his time he was called a skeptic, and I think that’s a better term.

There were times when he was really outspoken, perhaps most famously in his deathbed interview with James Boswell, when he said quite harsh things about religion and the religious—not just that he didn’t believe, but, as Boswell reported, that “when he heard a man was religious, he concluded he was a rascal, though he had known some instances of very good men being religious.”

Adam Smith gets called the father of capitalism, but you point out his thought was much more nuanced.

We think of Smith as an economist who theorized the invisible hand and championed free trade; he was in fact a professor of moral philosophy. His first book, which he always thought was the more important book, was called The Theory of Moral Sentiments, which focuses on moral philosophy. His second book The Wealth of Nations focuses on political economy.

He’s a far more complex figure than he’s often given credit for. He doesn’t at all hesitate to acknowledge the potential dangers and drawbacks of commercial society, with respect to morality, happiness, inequality—a number of things.

I was surprised to read that, unlike his reputation as a cheerleader for capitalism, Smith said it’s the best thing going, but it’s got problems.

Very much so. Karl Marx loved to quote Smith, because Smith says some harsh things about capitalism. Of course, Marx couched it as, “even Adam Smith realizes how horrible capitalism is . . .”—that’s not Smith’s view. He thinks that the benefits of commercial society—liberty, security, prosperity, and the rest—far outweigh its disadvantages. But there are disadvantages.

What drew Hume and Smith together?

It’s hard to say. Smith was a dozen years younger than Hume. After Smith finished his schooling at Oxford, he was delivering some public lectures in Edinburgh, and that’s almost certainly when they first met. We unfortunately have no record of their first meeting.

A year or two later, Smith moved to Glasgow to become a professor there, and Hume was still based in Edinburgh. But somehow the friendship flourished; we can tell from the few letters that we have that the relationship becomes ever warmer over the years. I think the remarkable thing was the depth of the friendship and the interesting similarities and divergences between their thought, and just that they are both so famous today.

How did the friendship affect each man’s work?

The friendship influenced Smith’s work much more than Hume’s. Hume had written almost all of his philosophical works before Smith even began to publish his. But almost everything Smith wrote shows unmistakable signs of Hume’s influence. The similarities in their outlooks are broad and deep, but Smith almost never simply adopted Hume’s views wholesale. On the contrary, he modified almost everything he touched.

Perhaps surprisingly, given their current reputations—with Hume cast as the great philosopher and Smith the great economist—I argue that when it comes to moral philosophy Smith’s views are generally more nuanced and sophisticated than Hume’s. On the other hand, Hume argued for free trade and stressed the moral, social, and political benefits of commerce several decades before The Wealth of Nations appeared.

If someone wanted to go back and read Hume or Smith in the original, what would you recommend?

One of the best places to start would be the two things that I include in the appendix to the book: Hume’s autobiography, “My Own Life,” and Smith’s addendum to it, the Letter to Strahan, which completes Hume’s life, as it were.