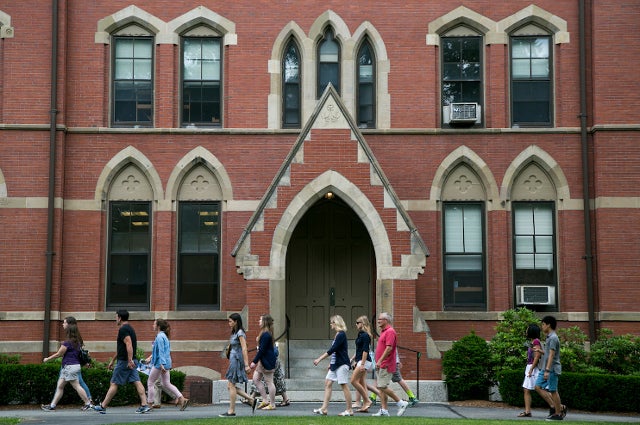 A record 21,501 students applied to the Schools of Arts and Sciences and Engineering this year, a 2 percent increase over last year, according to figures released by the Office of Undergraduate Admissions.

Karen Richardson, dean of undergraduate admissions and enrollment management, said the admissions office staff is busy reviewing applications for the Class of 2022, which she expects to total 1,435 undergraduates, close to last year’s 1,414.

Richardson attributes the upward trajectory in applications to the positive vibe about the university that the admissions team hears from high school seniors as they travel around the world.

In general, she said, they are attracted to Tufts’ academic reputation, but also to its student-centered characteristics, including small classes and ample opportunities for research, study abroad options, entrepreneurial ventures, and public service. The university’s commitment to inclusion and support, including to meeting the needs of outstanding students with financial aid, also creates a distinctive and diverse community, she said.

“Tufts resonates with a lot of students,” Richardson said. “High school can be a high-pressure place, but what we hear is that they’re looking for a college or university where they can explore their interests and be part of a community of other students who are excited to do the same.”

All 50 states are represented, with the most applications coming from Massachusetts, New York, and California.