Pulling Back the Curtain on DNA Ancestry Tests

For my family this past holiday season, the most heated discussion was not generated from the usual suspects (politics or sibling dynamics), but rather from a Secret Santa gift: a 23andMe genetics testing kit given by an aunt to her niece. The kit’s premise is that by sending in a saliva sample, you can find out how much of your DNA hails from different parts of the world.

The niece was thrilled. She said that, being half African American, she longed to know what region of Africa her ancestors had come from. But she and other family members voiced concerns about whether her genetic information and material would be sold to the highest bidder, to be used for research—or worse.

No one in the family understood all the ins and outs of ancestry DNA tests like 23andMe, so I took our questions to Sheldon Krimsky, the Lenore Stern Professor of Humanities and Social Sciences and an adjunct professor in public health and community medicine at Tufts. Krimsky, author of Genetic Justice and board chair of the Council for Responsible Genetics, recently co-wrote “Ancestry DNA Testing and Privacy: A Consumer Guide” [PDF].

For consumers, the most important thing is to “make sure you’re prepared for surprise, whether it’s a correct or incorrect one,” he said. “Are you an odd mixture? Probably; most of us are. Ancestry tests are trying to give people a simple answer to what chances are was a much more complex past.”

Tufts Now: How accurate are these tests when it comes to determining ethnicity and genealogy?

Sheldon Krimsky: We don’t really know, because the companies selling these services—and there are close to 40 of them—don’t share their data, and their methods are not validated by an independent group of scientists and there are not agreed-upon standards of accuracy. People have sent their DNA to several of these companies and found differences in the results—though not necessarily radical differences. So you have to look at the percentages you receive back with skepticism.

Why do the tests return different results?

Each company offering these services uses its own proprietary database of DNA samples called ancestry informative markers (AIMs) from current populations in Asia, Africa, Europe, and the Americas. From within those databases, they each select for a certain number of alleles—one member of a pair of genes located at a specific position on a specific chromosome—and in these spots, use the genetic variations known as single nucleotide polymorphisms (SNPs) as the basis for evaluating individuals. The markers—SNPs—are chosen because they have different frequencies across different geographical populations. 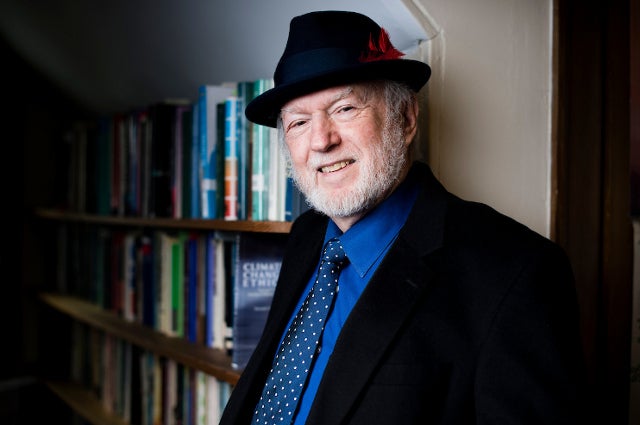 "There’s also a lot of concern that even though your name is not listed on the database, when the data is sold to somebody, the records can be de-anonymized. It has happened before—people have been able to take genetic information with no name on it and, through other databases, find the name associated with that genetic material," said Sheldon Krimsky. Photo: Alonso Nichols
They compare SNPs with those most frequently associated with different populations in their reference database. The results are in no way definitive; instead each company uses common genetic variations as the basis for saying the probability is that 50 percent of your DNA is, for example, from North Europe and 30 percent is from Asia, based on how it compares to the information in its database. However, if you send DNA to a second company, you might get different results, because it has a different database. Studies that have compared ancestry databases have found poorer concordance with Hispanic, East Asian, and South Asian descent.

There’s a big chunk of data—actually the majority—that these genetics-testing services don’t use. Your DNA contains millions of SNPs, but these tests are selectively looking at certain genetic variations and use between 100 to 300 AIMs, which account for a small part of the SNPs that differentiate the human family. So even if a test says you are 50 percent European, really it can only report that half of those SNPs of your DNA looks to be European.

The results are further skewed by the fact that certain ancestry information markers used by any particular test may come from only your paternal line (Y chromosome) or your maternal line (mitochondrial DNA). Tests using these markers are less accurate.

Finally, these testing services use DNA from modern populations in these regions to draw conclusions about people who lived in those areas hundreds or thousands of years ago. It’s a big leap to assume that the particular SNPs used by the tests have remained constant for all that time.

Does my family member have any hope of finding out where the African-American side of her family came from?

It’s possible to learn something about her past, if she’s lucky. She can perhaps find out what percentage of her genetic markers match favorably with markers seen in different regions of Africa, but only if the AIMs can distinguish different regions. West African AIMs are the most frequently used for inferring African ancestry. And if she were to do ancestry tests with two or three different companies, she might have a pretty good idea if her markers show a high or moderate similarity to those of people currently living in different parts of Africa, if those companies have the appropriate reference populations.

She has to understand that she’s not matching her DNA to someone from hundreds of years ago. It’s also quite possible for someone who is African American to get ancestry test results that say they’re 75 percent European. That’s because the chosen ancestry-information markers reflect only a small percentage of our DNA, and there’s actually more genetic diversity within the African population than between the African population and a European population. (For more about this, see dialogue one in a publication I co-wrote, “Using Dialogues to Explore Genetics, Ancestry, and Race” [PDF].)

Often these are pharmaceutical companies trying to understand how variations in certain sections of the human genome may be useful in drug development. (Certain drugs may not function as well in a person carrying certain mutations, so the companies want to find the frequency of these mutations in the population.) Only about 10 percent of the companies that offer ancestry tests destroy your original sample; the vast majority hold onto your sample or sell it. So it’s not just the data, but your actual your saliva, that’s being shopped around.

The companies offering testing services often go up for sale, and their privacy policies typically indicate that they bear no responsibility for your privacy once the company is sold—anything you signed is not reliable anymore. Many of the companies have privacy policies that state they can be changed at any time without notifying previous signers. In effect, you need to keep in contact with the company and keep yourself up-to-date on its policy. How many people are going to do that?

There’s also a lot of concern that even though your name is not listed on the database, when the data is sold to somebody, the records can be de-anonymized. It has happened before—people have been able to take genetic information with no name on it and, through other databases, find the name associated with that genetic material.

A co-worker told me that his sister, who was adopted, learned she had a half-sibling after doing one of these tests, and was really excited to find a new family member. But if I learned I had a half-sibling somewhere, that news would be something of a bombshell.

Yes, some of the companies selling these testing services give you the option of learning about people who have similar SNPs to you. You can get a list of people who may appear to be part of your larger family ancestry, and with permission you can contact them or they can contact you. On the surface this sounds innocuous and entertaining, but it certainly can raise questions that people might not be ready for.

For example, there are people who don’t know exactly where they came from. You may have thought your grandmother was your mother, because you were raised as sister to your actual mother.

Not everyone wants to hear that kind of information. I don’t know that people who sign up with these services fully understand all the possible implications of the results they could receive back.