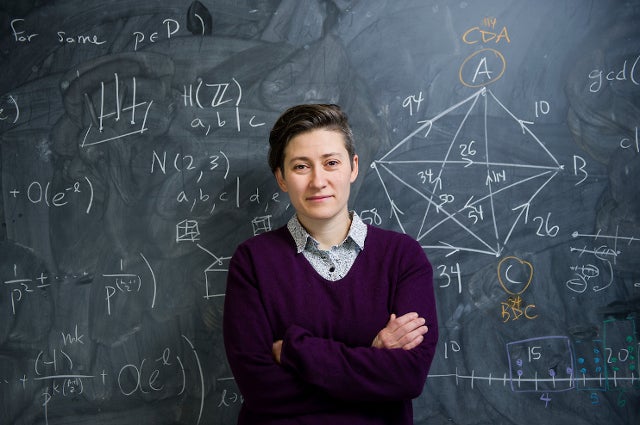 Tufts associate professor of mathematics Moon Duchin has been active in educating others about how to overcome gerrymandering—the drawing of legislative districts that favor one party, class, or race. Now she’ll be having an even more direct impact. Late last week, Pennsylvania Governor Tom Wolf asked Duchin to aid him in coming up with nonpartisan Congressional district maps.

The request came after the Pennsylvania Supreme Court on January 22 struck down the current districting, citing cases of extreme gerrymandering. Pennsylvania’s Congressional district boundary maps have been called the most extreme in the country, favoring the Republican Party. The “cartoon-moose-shaped Seventh District, running from Philadelphia city limits to Amish country, is routinely listed among the nation’s most gerrymandered,” reported the New York Times. 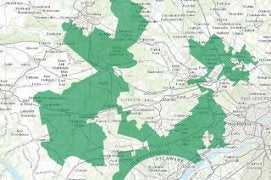 Pennsylvania’s Seventh Congressional district. Photo: Wikipedia
The state Supreme Court gave the legislature until February 9 to come up with a new map, and the governor until February 15 to approve a new map for consideration by the court. Pennsylvania Republicans in the meantime have appealed the decision to the U.S. Supreme Court.

Wolf enlisted Duchin because she “has been a leader in applying mathematics, geometry, and analytics to evaluate redistricted maps and work to eliminate extreme partisan gerrymandering,” he said in a statement. “I am open and willing to work with the General Assembly, but I will not accept an unfair map, and enlisting a nonpartisan expert is essential to ensure that is possible.”

The governor’s team first contacted Duchin on January 24 and asked if she was available to work on the project, and made the announcement on January 26.

“I can’t say much about the details, but can say that I have publicly championed the use of algorithmic sampling methods to explore the space of possible districting plans,” said Duchin. “It’s a truly nonpartisan way to put limits on the power of the line-drawers to tilt maps in any particular direction.”

Duchin, who is director of Tufts’ interdisciplinary Science, Technology, and Society program, leads the Metric Geometry and Gerrymandering Group. The small team of Boston-based mathematicians seeks “to study applications of geometry and computing to U.S. redistricting,” according to its website. “We believe that gerrymandering of all kinds is a fundamental threat to our democracy.” The project is supported by the Tisch College of Civic Life at Tufts.

The Metric Geometry and Gerrymandering Group has held a series of Geometry of Redistricting workshops around the country, beginning with a major conference at Tufts last summer.