Eric Washington, A76, former chief judge of the District of Columbia Court of Appeals, says we need to create a more fair legal system 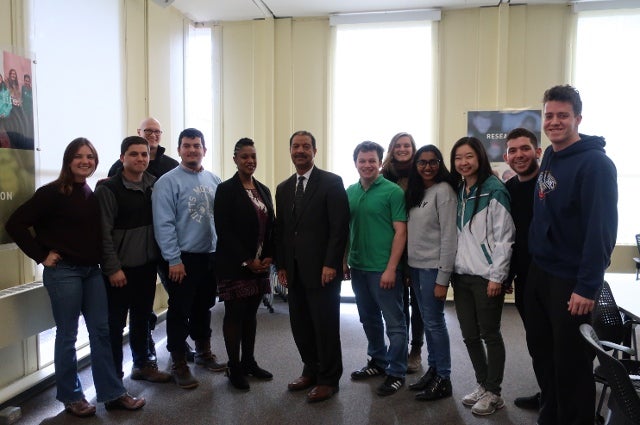 For more than two decades, the Washington, D.C. court’s bail system has been very different than most around the country. Unless the accused are deemed at high risk of committing another crime or not returning to court, they are let go, no money needed.

“There is no one in our jails being held because they can’t afford to pay,” said Eric Washington, A76, former chief judge of the District of Columbia Court of Appeals. “Frankly, I think the public is better protected, because now we are keeping people in jail who might actually hurt people,” versus people who are just too poor to scrape together the price of a bail bond.

Washington, who advocates for bail reform across the nation, talked with a gathering of Tufts community members at the Tisch College for Civic Life on February 6. He spoke about the access to justice issues that he has worked on throughout his career as a lawyer and judge, what it was like being an African American student at Tufts in the 1970s, and what campus diversity means to him.

People who are detained until their court date may lose out on jobs and education. It even contributes to recidivism, Washington said. Spending just two nights in jail significantly increases a person’s risk of being arrested again.

Washington, who received his law degree from Columbia School of Law, was appointed by President Bill Clinton to the District of Columbia Court of Appeals—the city’s highest court—in 1999; he became chief judge six years later. When he retired last year, he was the longest serving judge in the history of the D.C. courts.

Throughout that time, he worked to ensure all D.C. residents—including the homeless—had access to judicial services. He supported several initiatives that expanded access to interpreters for people with limited English, improved services for people who represent themselves in court, and made it easier for low- and middle-income people to obtain attorneys in civil cases.

People living in poverty often have no legal representation when they face eviction, deportation, custody battles, domestic violence and employment disputes, he said. That’s because while the right to an attorney is guaranteed in cases where the defendant may face significant jail time, that is not so in lesser cases. “I would argue that loss of liberty is not that significantly more important to people” than loss of a home or job, Washington said.

Although he entered Tufts thinking he would go into medicine, like his father, a surgeon, he left —with a degree in political science—knowing that he wanted to pursue law. The Civil Rights Movement was “very much a part of everyone’s daily life, everyone’s daily conversation,” he recalled.

In Boston, the busing of black students to predominantly white neighborhoods put the city in turmoil. Although the civil rights laws had passed, they still needed to be enforced, and so lawyers became much more social justice leaders, he said. “It cannot be overstated how much this campus and this environment in Boston in the 1970s helped shape my life and what I wanted to accomplish,” he said.

Tufts was changing, as well. Washington was part of the first large group of African American students to enroll at the university. But within that group, there were huge differences in experience. Washington, who grew up in a middle-class home in New Jersey, met black students from the inner city and the rural South.

That helped inform his views on campus diversity. When a person feels that he is not the lone voice for his race, he is comfortable sharing his individual opinions and perspectives, which enriches the academic environment for a school, he said.

“Diversity, to me, is that strength,” Washington said. “Not just pure numbers, but critical mass and diversity within groups.”