Anger and Hope on Climate Change

Al Gore told a Tufts audience that a sustainability revolution is possible, but political will is necessary 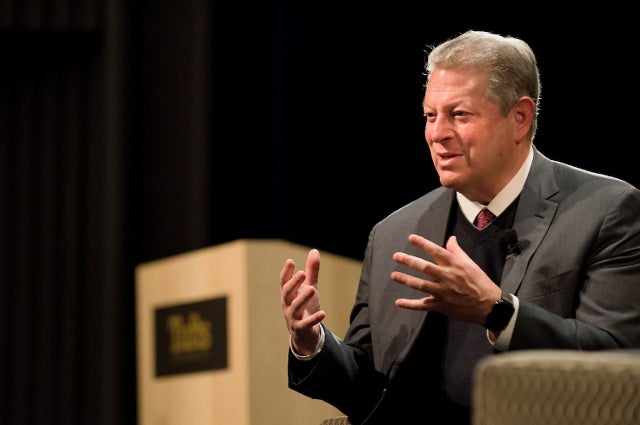 As a student at Harvard University watching two presidents lie about the Vietnam War, Al Gore knew he never wanted to get involved with such a corrupt system. “It soured me on politics,” said Gore, who spoke to a packed Cohen Auditorium in a Tisch College Distinguished Speakers talk on February 7.

Then Gore took a climate science class taught by Roger Revelle, who designed the first experiment to measure the amount of carbon dioxide in the Earth’s atmosphere. “He opened my eyes to the climate crisis. He sketched out the contours of the crisis with great clarity,” Gore said. “It was the truth of climate crisis itself that pulled me farther and farther toward it. I could no more put it down than I could stop breathing.”

Gore went on to become a Congressman, senator, vice president of the United States, and Democratic nominee for president. “I found my way back to an appreciation for what elected politics could give you by way of the opportunity to make a difference,” Gore said. “I came to feel eventually that if we are going to claim our destiny and make self-government work, then people who feel passionately about doing the right thing have to be willing to get involved.”

Gore also founded the Climate Reality Project, wrote the book that would be the basis of the award-winning documentary An Inconvenient Truth, and together with the Intergovernmental Panel on Climate Change, received the Nobel Peace Prize for warning and informing the world about climate change.

In a talk moderated by Kelly Sims Gallagher, F00, F03—a professor of energy and environmental policy at the Fletcher School who attended the Paris Agreement negotiations and was an intern in his office when he was vice president—Gore delved into the physical and geopolitical dangers posed by climate change.

Seven percent of the United States is headed toward drought; winter temperatures in the western part of the country are extraordinarily high; multiyear storms such as El Niño are becoming more frequent; and 50 percent of all species on Earth are projected to be extinct this century, Gore said.

Climate change is destabilizing whole nations and states, Gore said. For example, storms destroyed 60 percent of farms in Syria and sent 1.5 million refugees fleeing the region from 2006 to 2010, helping trigger a civil war.

In turn, governments are exacerbating the climate problem, Gore said, by excluding factors such as increased pollution and depreciation of groundwater and topsoil from their GDP calculations.

“I see the climate crisis as the most serious manifestation of a deeper underlying collision between human civilization as it’s currently organized, and the surprisingly frail ecological system of the Earth,” Gore said. “Were we not to grab hold of this destructive process and change course, it would be an existential threat to civilization and potentially to the species itself.”

And yet climate change denial is thriving in America more than any other country, thanks to false studies and propaganda funded by the fossil fuel industry, and a new tribalism that determines where people choose to get their information, Gore said. “Some conversations on climate change resemble a dysfunctional family, with an alcoholic father who flies into a rage when the word alcohol is mentioned,” Gore said. 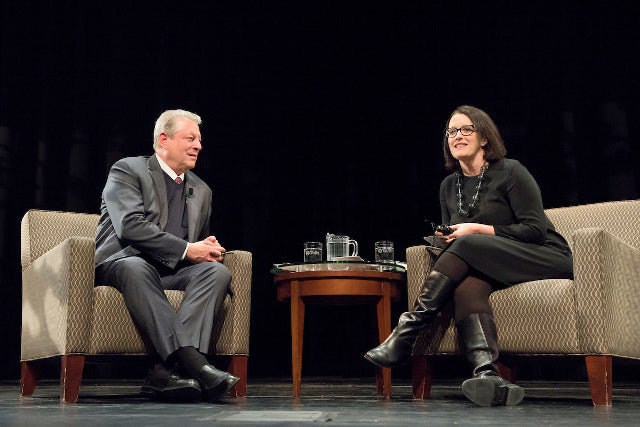 “I see the climate crisis as the most serious manifestation of a deeper underlying collision between human civilization as it’s currently organized, and the surprisingly frail ecological system of the Earth,” said Al Gore, with moderator Kelly Sims Gallagher, F00, F03, a professor of energy and environmental policy at the Fletcher School. Photo: Alonso Nichols
But there is hope, Gore said. “I’ve come to believe the world is now in the early stages of a sustainability revolution that has the magnitude of the Industrial Revolution, but the speed of the digital revolution, driven by digital tools, machine learning, and artificial intelligence,” Gore said, pointing to an AI system that cut Google server farms’ electricity usage by 56 percent.

On the legislative side, Gore praised California’s and Massachusetts’ cap and trade programs, which are one way to require companies to pay for the greenhouse gas they emit, and endorsed a carbon tax, which he called a more direct way. “It’s the single most important thing we can do,” Gore said.

Gore also pointed to the many state and city government and business leaders who have promised to abide the Paris Agreement, putting the U.S. on track to meet or exceed its commitments “regardless of what President Trump does or says or tweets,” he said—referring to Trump’s decision to withdraw the country from the accord. Gore added that “a new president could simply give thirty days’ notice, and we’re back in the agreement.”

A governing majority on climate issues is on the horizon, Gore said, pointing to the Congressional Climate Solutions Caucus—also known as the Noah’s Ark Caucus—which Democrats can only join if they bring a Republican as well. Solutions both technological and legislative abound, he said. “What we still lack is sufficient political will to implement them quickly enough to forestall the worst consequences of the crisis,” Gore said.

But we can change that, Gore said. Although politics today can be toxic, he told the students in the audience that they should talk about climate change, even with those who don’t agree. “Give them the gift of your listening. Try to understand exactly what part of the science they have a problem and hone in on that,” he said. “If it doesn’t work, you may want to spend your time talking to people who may want to listen to you. But keep trying.”

Students should also register to vote, Gore said, and even run for office—just as a certain young man once overcame his disillusionment in government to lead a climate change revolution.

“For those who think we don’t have enough political will, remember political will is itself a renewable resource,” Gore said. “Help renew it.”