Quips, Puns, and Rhyming That Stuns 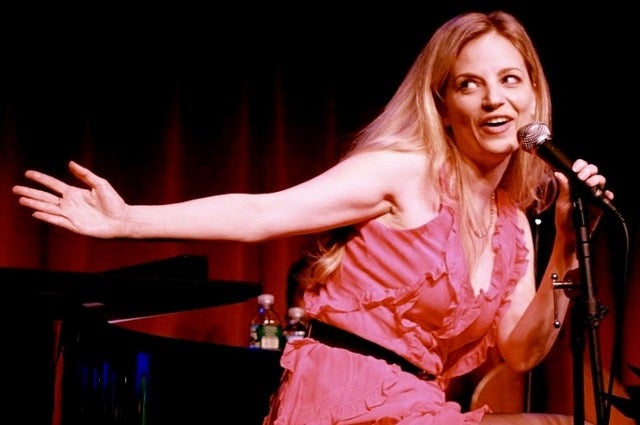 It’s not hard to see where Amanda Yesnowitz’s passion lies. She sums it up in a song she wrote called “A Way With Words”: “I’m for verbs/I’m pro nouns/I love sentimental sentences with sibilant sounds.”

For more than two decades, Yesnowitz, J94, has been arranging words with wit, rhyme, emotion, and meter as a professional lyricist for the stage. She has written entire musicals, including Somewhere in Time, which premiered in 2013 at the Portland Center Stage, as well as stand-alone songs performed by Glee’s Lea Michele and others.

All those hours spent with a rhyming dictionary have paid off. On February 5, she received the Kleban Prize for the “most promising musical theater lyricist.” The annual prize, which includes a $100,000 award, was endowed by Edward Kleban, the Tony- and Pulitzer Prize-winning lyricist of the musical A Chorus Line.

“I am gobsmacked to be a mere tile in the mosaic of Ed Kleban’s artistic legacy,” Yesnowitz said in her acceptance speech.

It took Yesnowitz a while to figure out that songwriting was her destiny. Her first love was math; competing in league competitions gave her a sense of ordered satisfaction in her chaotic teenage years. But she also enjoyed theater. Growing up in Brooklyn, she made many trips to Broadway, the first to watch Sarah Jessica Parker in the title role of the musical Annie. She was more mesmerized by the spectacle than the musical repartee. “You are not thinking, ‘Who wrote this?’” she said. “You are thinking, ‘How to do I get on that stage?’”

At Tufts, she was a double major in English and drama and acted, stage-managed, or manned the box office for several productions. In her spare time, she amused her friends with parody songs. Her friend Josh Weintraub, A94, who went on to produce shows for Jimmy Kimmel and David Letterman, recalled that “something as small as a note she passed in class . . . would include a tidy limerick or a few lines of verse I’d find clever, surprising, and funny.”

After Tufts, Yesnowitz enrolled in the musical theater program at the Boston Conservatory at Berklee. But while she enjoyed performing, it didn’t feel quite right.

“There were a lot of girls who looked like me, who sounded like me,” she said. “And more than that, I didn’t possess that particular brand of ambition. I just thought there was something else that I should be doing.”

A turning point came when each student had to perform a solo show. She chose to make up her own material, rewriting the words to some favorite songs. After the performance, people didn’t tell her, “You’re such a great singer,” but rather, “You’re a really great lyricist.” She admitted to herself that her favorite part wasn’t nailing a high note but when people laughed at her wordplay.

In 1997, she enrolled in New York University’s musical theater writing program, and learned that lyric writing is a language unto itself. Sure, you can rhyme “wed” with “bed,” but “bread,” with its more complicated spelling, has a more satisfying rhyme. Or for real fulfillment, rhyme a noun with an adverb.

“It’s just going to land better,” she said. “And your audience may not even know why.”

Lyric writing even draws on her affection for the precision and structure of math, as she fits syllables into the beats and bars. “I didn’t realize that math and music, those muscles are very related,” she said.

For inspiration, Yesnowitz turns to the work of Stephen Sondheim, Cole Porter, Irving Berlin, and Lynn Ahrens, who won a Tony Award for Ragtime. Ahrens remembers receiving a letter from Yesnowitz many years ago. “She said she wanted to become a lyricist and asked if I could give her some advice,” Ahrens recalled. “Whatever I told her, it would have been gentle advice for an aspiring young writer, knowing that most young writers grow up to be anything but lyricists. Amanda proved the exception.”

Impressed with Yesnowitz’s talent and focus, Ahrens became a mentor. “She has a graceful contemporary voice, a sharp wit, and a wonderful sense of craft,” Ahrens said.

In 2001, she won a prestigious Jonathan Larson Grant, based in part on one of her first shows, a musical about a girl who tries to live her life like a math equation. The show was semiautobiographical, as many of her songs are. One of her most popular is a comedic love song about a two-week fling she had with a younger man: “The thing about Dylan, he’s 24 and I’m—not.” (They’ve been together five years now.)

The theatrical life shows up in many of her songs, too, including “Understudy Blues”: “The director loves your acting/the producers love your voice/they love your work so doggone much/that you’re their second choice.”

Her current project is a musical inspired by Margaret Bulkley, a nineteenth-century Irish woman who lived as the male surgeon James Barry. This is the third time she has partnered with composer Doug Katsaros, but she has worked with several composers. “I write around,” she likes to say. And, in the same vein, she said “I go both ways,” meaning she can write for an existing composition or start with the words. When it starts with a lyric, it’s a beautiful blank canvas to fill. When the music comes first, it’s a puzzle for her to figure out.

Perhaps not surprisingly for a word juggler, Yesnowitz is also a competitive crossword puzzle solver—she’s taken part in national competitions (“It’s sort of like being in a room with a whole bunch of people who are taking their SATs voluntarily”) and even had one of her own puzzles published in the New York Times. It was notable for its lyrical clues, such as “Where to park a parka?”

It’s just what you would expect from someone who loves words so very much. As she writes, “Wouldn’t that be natural for someone like me?/a dame whose name goes literally from A to Z?”

Julie Flaherty can be reached at Julie.flaherty@tufts.edu.