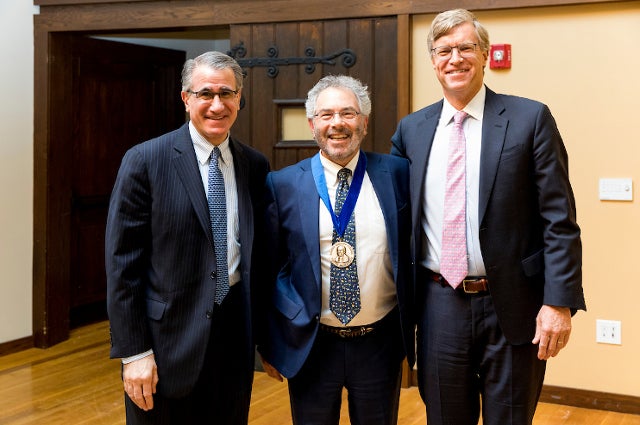 Jeffrey A. Summit, AG88, AG95, A03P, A05P, was awarded the Ballou Medal on February 8 in recognition of his extraordinary leadership of Tufts Hillel for nearly four decades.

President Anthony Monaco bestowed the honor at a dinner at Breed Hall, where friends and colleagues came together congratulate Summit on his contributions to spiritual and community life of the university. Summit is stepping down as Neubauer Executive Director of Tufts Hillel at the end of this academic year.

Summit “has built enduring connections with thousands of Tufts students,” said Monaco. “His commitment to the spiritual, personal, and intellectual development of young people is unmatched.”

Over the course of his career, he helped secure funding to build the Granoff Family Hillel Center and establish a program endowment. His programmatic initiatives today engage Jewish students in a broad range of innovative activities, with a focus on social justice and active citizenship.

Under his leadership, said Monaco, Tufts Hillel became one of the outstanding Hillels in the country. “The programming at Hillel has been recognized nationally for its focus on social justice and active citizenship, interfaith and intercultural cooperation, Holocaust and genocide programming, Israel engagement and advocacy, and the promotion of coexistence and peace efforts between Israelis and Palestinians,” he said. “Thank you for all you have done to make Tufts a better place and to give our students tools and insights to help make the world a better place.”

Summit said he was honored to receive the medal, named for Tufts’ first President, Hosea Ballou II. “I was so moved when President Monaco told me that the trustees had decided to present me with the Hosea Ballou Medal,” said Summit. “Over the years, Tufts has given me an extraordinary gift—the opportunity to do work that I love, with people whom I value tremendously.”

After stepping down at Hillel, Summit will continue as a research professor in the Department of Music and the Judaic Studies Program.

Summit’s achievements have been widely recognized. He received the inaugural Edgar M. Bronfman Award for Lifetime Accomplishment in Hillel Professional Leadership from Hillel International; the Combined Jewish Philanthropies (Boston Jewish Federation) Rabbinic Leadership Award; and the Anne Heyman Spirit Award, for work to further the mission of the Agahozo-Shalom Youth Village in Rwanda, a village for survivors of the Rwandan genocide. As part of this honor, the village’s music building was named the Jeffrey A. Summit Music Center.

Summit, a 1972 graduate of Brandeis University, earned his M.A.H.L. from Hebrew Union College-Jewish Institute of Religion in 1975. He became director of Tufts Hillel in 1979.

A talented musician and scholar, he would earn his M.A. and Ph.D. in ethnomusicology from Tufts in 1988 and 1995.

His exploration of the relationships between music, identity, and spiritual experience took him to Africa to study and record the music of Uganda’s Jewish people. His 2004 CD Abayudaya: Music from the Jewish People of Uganda (Smithsonian Folkways Recordings) was nominated for a Grammy. In 2013, Delicious Peace: Coffee, Music and Interfaith Harmony in Uganda (Smithsonian Folkways Recordings), won “best traditional world music CD” at the Independent Music Awards. He is also the author of two books, both published by Oxford University Press: Singing God’s Words: The Performance of Biblical Chant in Contemporary Judaism and The Lord’s Song in a Strange Land: Music and Identity in Contemporary Jewish Worship.

Summit has also played an important role in the intellectual and community vitality of the Tufts European Center in Talloires, France, where he has taught courses for Tufts students and led seminars for alumni, parents, and friends of the university. An oral history project with the Jewish community of nearby Annecy, spanning 1987 to 1994, won the International Hillel's Haber Award for Excellence in Jewish Campus Programming.

The Ballou Medal, established during the presidency of Leonard Carmichael, recognizes members of the Tufts community who have rendered exceptional service for the institution. Summit is the eighteenth recipient since it was established in 1939. Other past recipients who were present at the event were Adele Fleet Bacow; William E. Gehling, A74, AG79, A05P; and Robyn L. Gittleman, AG69, A85P.