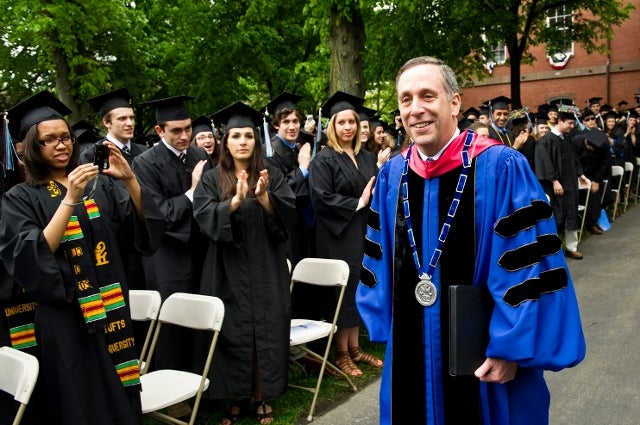 Lawrence S. Bacow, H12, who was president of Tufts from 2001 to 2011, has been named Harvard’s twenty-ninth president. While at Tufts, Bacow championed lowering barriers to higher education through financial aid and propelled robust investments in campus facilities and research.

Bacow’s “superb leadership while at Tufts, and his commitment to academic excellence, strength of principle, and vision will lead Harvard University in its next era of accomplishment,” said President Anthony P. Monaco in an email to the Tufts community. He will be “a forceful and effective advocate for the importance of higher education and research for our nation and the world,” Monaco added.

William F. Lee, senior fellow of the Harvard Corporation and chair of Harvard’s presidential search committee, said that Bacow “will bring to the task not only wide experience, deep expertise, and an intimate familiarity with Harvard’s opportunities and challenges, but also a passionate commitment to helping universities, and everyone within them, serve the larger world.”

After stepping down as president of Tufts in 2011, Bacow served for three years as President-in-Residence in the Higher Education Program at Harvard’s Graduate School of Education. He is currently the Hauser Leader-in-Residence at the Harvard Kennedy School of Government’s Center for Public Leadership.

As Tufts’ twelfth president, Bacow led the university through a decade that began with September 11 and included the economic tumult of the 2008 recession. Tufts was steadied by his unifying and strategic focus on Tufts’ distinctive strengths and its capacity for innovative collaborations of schools and disciplines.

“Larry Bacow set Tufts on a trajectory to a different level, and his record at the university speaks for itself,” said James A. Stern, E72, A07P, H14, who served as chair of the Tufts University Board of Trustees during Bacow’s presidency. “Larry is an extraordinary leader who, in the pursuit of excellence, thinks about where things need to be, not simply where they are now. He is the ultimate team player; someone who makes everyone around him better. He was deeply respected—even loved—by all the constituencies at Tufts—students, faculty, staff and alumni.”

His imprint on the life of the university extended to new construction, including the Perry and Marty Granoff Music Center on the Medford/Somerville campus. Campus improvements also included the addition of five floors to the School of Dental Medicine building and the renovation of the Sackler Center at the School of Medicine in Boston and the Agnes Varis Campus Center in Grafton.

In a video posted by Harvard, Bacow commented on his decade at Tufts and said that his “most important achievement was dramatically increasing access by raising a lot of money for financial aid.”

Tufts increased financial aid for undergraduate, graduate, and professional students by almost 94 percent. The following year, Tufts launched the first university-wide program in America to ease the debt of graduates pursuing careers in public service and the not-for-profit sector.

Tufts also made significant philanthropic progress, raising $1.2 billion in its Beyond Boundaries campaign. The university’s endowment grew by nearly 86 percent from 2002 through December 2009, to $1.26 billion.

Bacow’s final fundraising goal was to finish the funding for the Steve Tisch Sports and Fitness facility and for a new sailing pavilion, named in honor of Larry and Adele Bacow when dedicated in 2013.