On a typical day, writer Christopher Golden, A89, might have a half dozen projects on his plate, and there’s certainly no time for writer’s block.

Right now, for example, the award-winning, bestselling author of fiction and nonfiction for adults and young adults is working on a new novel called The Pandora Room; a novelization of the new Predator movie; the latest “Joe Golem: Occult Detective” installment for Dark Horse Comics; and a horror anthology called The Twisted Book of Shadows, he said at a Friends of Tisch Library talk on February 8.

Golden, who writes horror, fantasy, mystery, and science fiction, also co-hosts a podcast on books, movies, and culture called Three Guys With Beards, is a judge for the World Fantasy Awards, and has agreed to give the keynote speech at the International Vampire Film and Arts Festival in Transylvania—that’s in Romania, of course—in June.

It’s a chaotic life, Golden said at the event, where he was interviewed by a fellow Jumbo—his son, Nick Golden, A16. “You just have to be able to pick your moment and see what’s burning brightest of all the fires that have to be put out, and focus on that one thing.”

Golden came by his horror and fantasy interests naturally. Growing up, he was drawn to Marvel Comics’ horror series The Tomb of Dracula; the TV series Kolchak: The Night Stalker, featuring a Chicago reporter investigating supernatural crimes; The Twilight Zone; and Stephen King. “The horror people are my people, and the stuff that was horrific was the stuff I loved,” Golden said.

At Tufts, Golden was entranced by Byzantine history professor George Marcopoulos, who has since passed away. “He would come in and start telling these stories. He was so funny and engaging and detailed in his storytelling,” Golden said. Another favorite was Jay Cantor, his first creative writing teacher—the two kidded around constantly during class, he said. Cantor had won a MacArthur Fellowship “and it was troubling to him that I was not impressed,” Golden joked. “We would give each other shit constantly.”

Professor Alan Lebowitz, who taught nineteenth and twentieth century American literature, influenced him greatly, Golden added, tipping him off to the visual, cinematic quality of his writing. But they didn’t quite see eye-to-eye on a paper Golden wrote arguing that the whale is the real hero of Moby Dick, called “In Defense of the Whale.” “Alan and I still argue about the grade he gave me,” Golden said. 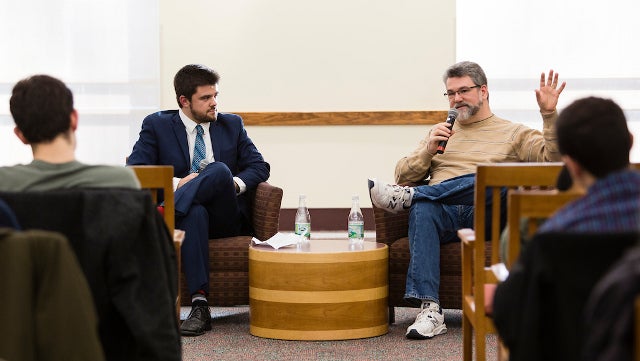 “You might be good at [writing], but you’ll never know and you’ll never get better at it if you don’t sit down and write,” Christopher Golden told his son, Nick, at the event. “At the end of the day, it really is that simple.” Photo: Anna Miller

It wasn’t just Herman Melville. Golden felt a disconnect with many writers he read, even horror writers. “They were these distant figures who produced this work I consumed,” he said. Golden also sensed a difference between himself and his fellow creative writing students. “All my classmates wanted to write about marching on Washington—I wanted to write about zombies marching on Washington.”

Then he stumbled across a book by horror writing duo John Skipp and Craig Spector. “It wasn’t that it looked less difficult, but the tone was so conversational, so upbeat. It was fun!” Golden said. “It was the first time I went, ‘I could do this.’”

In his room in Stratton Hall, Golden, then a senior, proceeded to write a novel he called Shadow Time, which would later become Of Saints and Shadows, the first in the Shadow Saga. Upon learning that horror was a dying genre, Golden decided he didn’t care. “Most people gave up and wrote something else,” Golden said. “I did not. I kept doing whatever I felt like I could to keep going.”

Upon graduating, he worked as a journalist in New York City, then freelanced for a comic book and pop culture magazine, which led to working on Hellboy comic books, then novels (and more recently, the Hellboy movie). He learned a great deal from collaborating with Hellboy artist Mike Mignola. “My instinct as a novelist is primarily to explain things, but he thinks of a thing for its beauty and the wonder or weirdness or fascination of it,” Golden said. “It was really freeing to write novels with Mike.”

Asked what advice he would give aspiring writers, Golden recommended reading as much as possible, and as many kinds of things as possible—and to only take on projects that you really care about. “If I have the opportunity to do something that would excite the fifteen-year-old kid I used to be, I don’t want to say no to it,” Golden said.

Golden had one more simple piece of advice. “If you want to write, then write. The only thing preventing you from doing it is disinterest,” said Golden, who believes writer’s block doesn’t exist—there are only non-writers. “You might be good at it, but you’ll never know and you’ll never get better at it if you don’t sit down and write. At the end of the day, it really is that simple.”