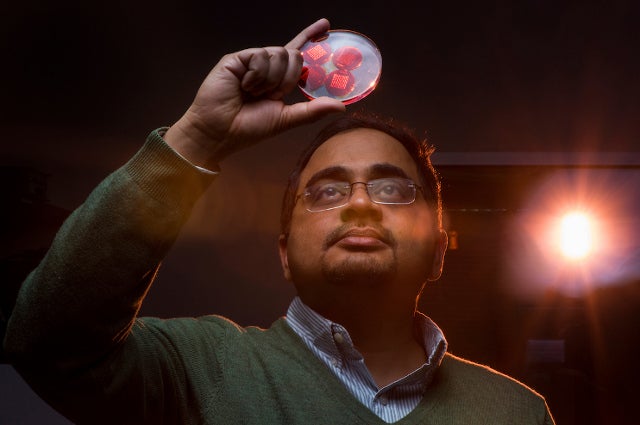 Getting an injection at the doctor’s office is never a fun thing, but a new approach is on the horizon, using what are called microneedles, arrays of tiny needles that deliver medication through the skin without causing pain. But fabricating microneedles is costly, requiring cleanrooms and expensive equipment.

Now a Tufts research team has devised a method to make microneedles without cleanrooms, using readily available materials and equipment. They described the process in a recent article in the journal Microsystems & Nanoengineering.

Sameer Sonkusale, a professor of electrical and computer engineering who led the project, said his research group is “strongly motivated by the need to create affordable devices for the developing world.” Microneedle patches, which can be used in many settings, fit that goal perfectly. “We wanted to see if we could make them routinely and using a low-cost, cleanroom-free process,” he said. 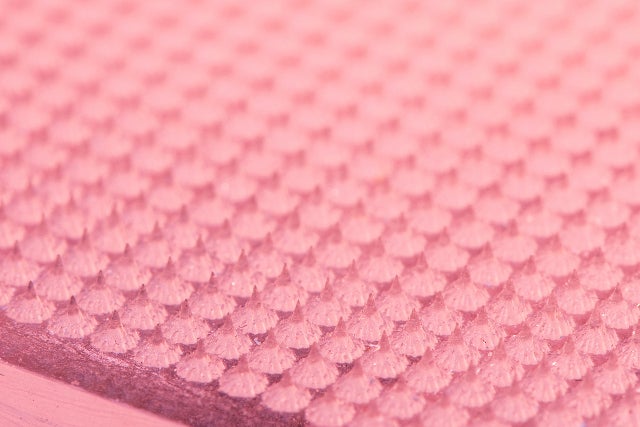 The fabricated microneedles. Photo: Alonso Nichols
Sonkusale and his team of two graduate students and a postdoctoral researcher came up with a process to create molds using a laser cutting technique that would allow for the fabrication of different-size microneedles, he said.

Using a carbon-dioxide laser, which is readily available in many labs, they etched the microscopic molds on sheets of commonly used acrylic, employing what they call a “crossover lines laser ablation technique.” The researchers then used the molds to create degradable microneedles using inexpensive polyvinyl alcohol polymer. At its base, each needle is about one-tenth of the width of a human hair; at its point, it is around one-one hundredth the width of a hair. 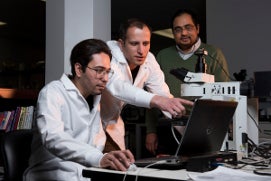 Sameer Sonkusale, right, and his co-authors Hojat Rezaei Nejad and Aydin Sadeqi at the Tufts School of Engineering’s Nano Lab. Photo: Alonso Nichols
To make sure the microneedles functioned correctly, the researchers did drug release studies on a gelatin hydrogel, which is transparent and is similar to human skin tissue. The microneedles worked as planned. The next step, Sonkusale said, is to do animal studies of drug delivery via microneedles on skin.

There are different kinds of microneedles—solid, coated, and hollow, for example, depending on the intended application. Sonkusale said that his group plans to work on all the different kinds. “They each have unique applications,” he said. “For chronic wounds, we will have solid and drug coated microneedles. For diabetes, where we would like to explore delivering insulin, we will explore hollow microneedles.”

The process they devised is easy to scale up, and even though the molds can each be used up to ten times, it won’t be necessary. “These are so cheap to make that there is no need to reuse them so many times,” Sonkusale said. “All we need is a laser cutter—and anyone can print them.”