Rally Round the Middle 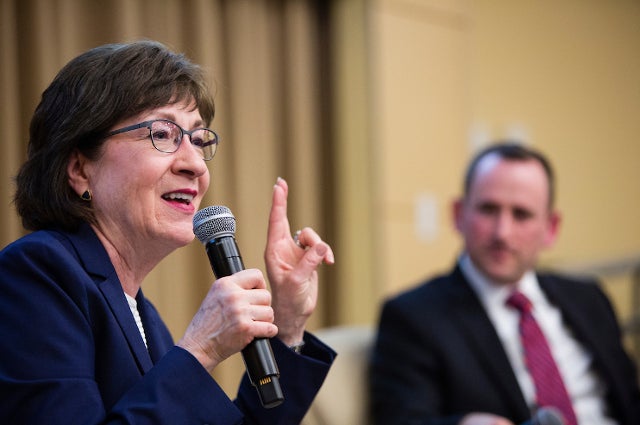 On a Saturday in October 2013, U.S. Senator Susan Collins sat in her office, watching a live broadcast from the Senate floor. “Democrat, Republican, Democrat, Republican, each of them was pointing the finger at the other side, blaming them for the shutdown,” said Collins at the fifth Alan D. Solomont Lecture on Citizenship and Public Service on February 21 at Tufts. “To me, it represented the ultimate failure to govern. If we can’t even keep government going, that really is a plague on both houses.”

Her staff had been furloughed, and Collins was alone in the office. “That was always dangerous, because there was no one to talk me out of anything,” said Collins, who has been a senator from Maine for more than twenty years. She went down to the floor and spoke, urging colleagues to “come out of their partisan corners and work together to reopen government.”

As soon as she left the floor, her cell phone rang. It was Republican Senator Lisa Murkowski of Alaska. The next call was from Democratic Senator Amy Klobuchar of Minnesota. In total, Collins ended up in her office with fourteen senators from both parties, who worked together on a proposal that ended the government shutdown after sixteen days.

Last month, they did it again—but this time it was twenty-six senators and three days. And although the self-proclaimed Common Sense Coalition came up six votes short of the sixty they needed to pass a bipartisan immigration bill this month, it still got more votes than any other plan out there, said Collins.

“I tell you this because I think there is still a center in the Senate. But it’s really tough, because you get criticized just mercilessly by left and the right,” said Collins, joking that if she turned around, you would see the arrows in her back.

Moderates are having an especially tough time these days, because both parties have been “hijacked by extremes,” with the result that presidents are increasingly resorting to executive orders to overturn the will of Congress—including President Donald Trump and former President Barack Obama, Collins said. But that only makes it more important for the parties to work together to restore the health of American democracy, Collins said. 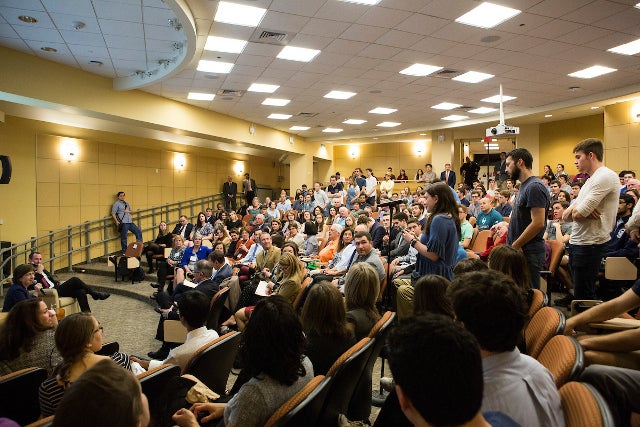 “We’ve got to start learning to work together again,” Susan Collins told the Tufts audience. “Maine has always had a proud tradition of that. New England has had a proud tradition of that. I hope we can get back to it.” Photo: Anna Miller
This holds true when it comes to confirming members of the Supreme Court, Collins said, responding to a question from moderator and associate professor of political science Eitan Hersh, who formerly worked as a Senate page for Collins and others.

“I felt that a lot of Democrats were unfair to Neil Gorsuch, and that was a reaction to the unfairness toward Merrick Garland,” said Collins, who was one of just a handful of Republicans willing to meet with Garland when former President Barack Obama nominated him. “What I would like to see us do is go back to depoliticizing the judiciary in general. This is dangerous, and both sides are guilty of applying litmus tests to judicial nominees.”

Bipartisanship should also be practiced when it comes to gun control, Collins said, responding to a question about a high school shooting in Parkland, Florida, last week that left seventeen dead. She said she supports strengthening gun purchase background checks, leaving no loophole for gun shows; increasing the age at which a person can buy a semiautomatic rifle from eighteen to twenty-one; and instituting a “no-fly, no-buy” provision based on the government no-fly list, an initiative she authored herself.

“Surely let’s start with issues that we ought to be able to agree on, where we won’t be infringing on Second Amendment rights,” Collins said. “Because we have to accept the fact that this is a Constitutional right—but it is not a right that is unlimited.”

Collins fielded several tough questions from students, including why she supported the Republican tax bill late last year. “I think this bill had a lot of good provisions in it,” Collins said, pointing to the doubling of the standard deduction in particular. She added, “It was not correct that I made a deal with [Senate Majority Leader Mitch McConnell] that he would get my vote for the tax bill.”

She also answered a question about why she voted against confirming U.S. Secretary of Education Betsy DeVos in the Senate, but voted to allow her nomination to continue in committee. “I have always felt the full Senate should vote on Cabinet nominees and they should not be blocked at the committee level,” Collins said.