We Are Not Your Subjects Now 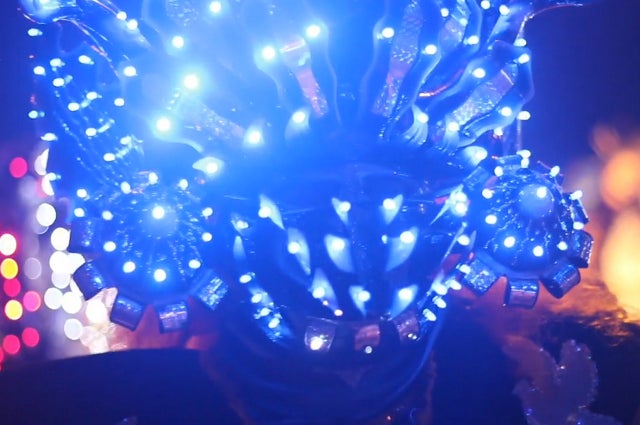 Our broader mainstream culture tends to imagine indigenous peoples of the Americas as people of the past rather than people of the present, says Pilar Tompkins Rivas, curator of the exhibition A Decolonial Atlas: Strategies in Contemporary Art of the Americas, on display at the Tufts University Art Gallery through April 15.

To counter this assumption, Tompkins Rivas placed a trio of photographer Isabel Avila’s portraits of Pawnee Indians clad in urban sports gear at the entrance to the show. Hanging nearby is Ricardo Estrada’s acrylic-and-gold-leaf-on-skateboard assemblage emblazoned with an image of Aztec deity Tezcatlipoca resembling Darth Vader. 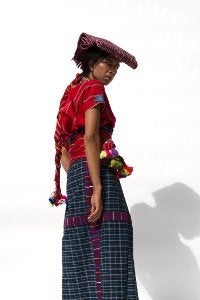 Martine Gutierrez, “Maria, Cakchiquel,” 2016. C-print mounted on Sintra. © Martine Gutierrez. Photo: Courtesy of Martine Gutierrez and Ryan Lee, New York
Through photography, sculpture, painting and video, the artists—many of indigenous backgrounds and all from throughout the Americas—ask their viewers to reconsider centuries of colonial and postcolonial perceptions about the American hemisphere and its peoples. The exhibition is organized in four thematic areas representing the strategies noted in the show’s title, that the artists engage to strip away layers of colonial misperception through their art.

The second area, “Dislodging Time,” asks viewers to let go of the linear Western concept of time and think instead in terms of pre-Colombian abstract cycles. In the video A Brief History of Architecture in Guatemala by Guatemalan artist Naufus Ramírez-Figueroa, for example, a trio of performers dressed as pre-Columbian, colonial and modern Guatemalan architectural structures collide in a quirky dance that destroys their costumes, exposing their naked bodies and the underlying humanity that exists, no matter which cultural outfit they happen to be wearing.

The third area, “Countering Extractivism,” confronts large-scale removal of natural resources. In her split-screen video, Spaniards Named Her Magdalena, but Natives Call Her Yuma, Carolina Caycedo juxtaposes images of Colombia’s principal river, the Magdalena, whose water rights have been sold to a transnational company for the development of hydroelectric dams, with crowds funneled through pedestrian barriers by police in Germany. On a nearby wall, Caycedo’s sculpture, Three Arched Knuckle, compares a river dam to a type of brass knuckles used in World War II by Nazis. 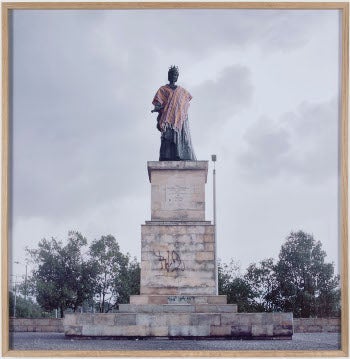 Iván Argote, “Turistas (Isabel Giving a Contract, and Christopher Pointing Out the South, At Bogota)”, 2012, C-print. Photo: Courtesy of Iván Argote and Galerie Perrotin
The last area, “Intervening the Archive,” aims to upend historical accounts written by European conquers. In Ivan Argote’s photograph Turistas, a serape-draped statue of Christopher Columbus stands atop a graffiti-covered pedestal in Bogotá. In the same artist’s video, Barcelona, a statue depicting a Catholic priest with an indigenous figure kneeling at his feet and kissing his cross is doused in alcohol and set ablaze.

“There’s a playfulness in the work, even though the subject matter is tough,” Tompkins Rivas said. “Political and social critique are so often accompanied by satire. When I first installed the show, I jokingly referred to one part of the room as my genocide corner. But that’s what we’re actually dealing with—the genocide of indigenous and African people in the Americas. That is our history. And yet we’re still living and thriving here.”

The exhibition was first presented in Egypt, then in Mexico, then at the Vincent Price Art Museum at East Los Angeles College, where Tompkins Rivas is director. To bring the show to the Aidekman Arts Center, Tompkins Rivas worked remotely from the West Coast with Dina Deitsch, director and chief curator for Tufts University Art Galleries. Last July, Deitsch visited the exhibition in Los Angeles before she and her staff began adapting Tompkins Rivas’s show for Tufts.

“We added just a few artworks and adapted the exhibition for our gallery space, but were careful to maintain Pilar’s powerful vision from the L.A. presentation,” Deitsch said.

Tomkins Rivas said when she travels to Tufts to participate in one of many educational programs related to the show that she is excited to see how it has evolved here. Those events include talks, screenings, live performances, and art-making workshops. (For more information on the show’s related program, visit the Tufts Art Gallery calendar.)

“The show addresses what it means to be from the Americas which, in this moment, has taken on a new level of urgency that has connected throughout the campus,” Deitsch says. “These artists use the crafts of contemporary art—video, performance, sculpture, collage, and photography—to make rather complex histories and issues accessible in new and really surprising ways.”

The Tufts Art Gallery is located at 40 Talbot Avenue on the university’s Medford/Somerville campus. Gallery hours are Tuesday through Sunday, 11 a.m. to 5 p.m., and Thursday until 8 p.m. For more information, visit http://artgallery.tufts.edu.