A Single Atom for Catalytic Conversion 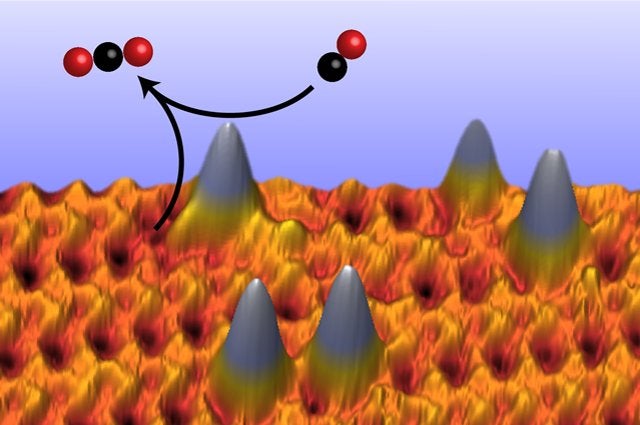 Catalytic converters make air cleaner by removing toxic gases before they leave car or truck engines. But the converters use expensive precious metals, so making them more efficient would make them more economical.

Now Tufts researchers, along with colleagues at Washington State University, have proven it’s possible to use a single atom of platinum to convert poisonous carbon monoxide to benign carbon dioxide, and at a lower temperature than current technology allows. They reported the findings in a paper on March 5 in the journal Nature Catalysis.

The team, led by Charles Sykes, a professor of chemistry at Tufts, placed single platinum atoms on an oxidized copper base, inserted it into a scanning tunneling microscope in the lab, and added “tiny, tiny” amounts of carbon monoxide. The extremely high resolution of the scanning tunneling microscope allowed the researchers to monitor the reaction.

The result was as they had hoped: the catalytic conversion happened, and at a lower temperature than normal catalysis occurs. That’s important because as cars have become more efficient, engines are running cooler, a problem for standard catalytic converters, which require higher temperatures for the chemical reaction to take place.

Because the experiment’s chemical reaction happened at a low temperature, the research result, Sykes said, “can guide the design of the next generation of low-temperature catalytic converters.”

A single atom, of course, wouldn’t be enough to run a catalytic converter in a car, “but a catalyst containing single platinum atoms dispersed throughout would be possible using a lot less platinum than is used currently,” Sykes said. Platinum currently costs about $1,000 per ounce, so even small savings would add up.

Sykes led the Tufts team, made up of three doctoral students in chemistry and two recent graduates of the program, in addition to researchers led by Jean-Sabin McEwen at Washington State University. The work was supported by the Department of Energy Basic Energy Sciences program.

Going forward, Sykes hopes to probe other precious metals that catalytic converters use, such as rhodium, to see “if we can play similar single atom tricks with that chemistry,” he said.