Tufts University a top producer of Fulbright students in 2017-18 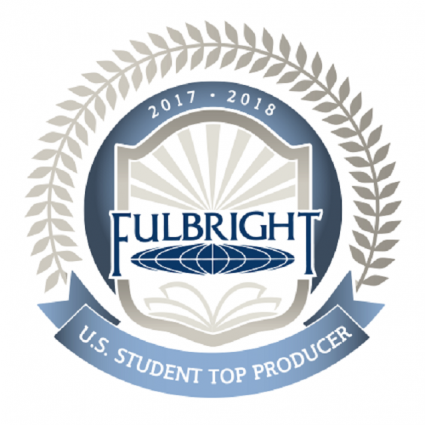 The Fulbright U.S. Student Program is the U.S. government’s flagship international educational exchange program. Top-producing institutions are highlighted annually in The Chronicle of Higher Education, which publishes the list of top-producing colleges and universities compiled from data provided by the U.S. Department of State’s Bureau of Educational and Cultural Affairs.

“Tufts students’ continued success in the Fulbright program speaks to their dedication to excellence, critical inquiry and civic engagement, all of which are pillars of a Tufts education. We’re proud to be a top Fulbright producer again and congratulate our students on their accomplishments,” said President Anthony P. Monaco.

“This is a great honor for the university, and a testament to these students’ hard work, creative ideas, and strong character.” added Anne Moore, Ph.D., program specialist in the Tufts University Office of Scholar Development, which administers the Fulbright competition at Tufts. “Tufts’ success in the Fulbright program is a credit to our strong international orientation and our commitment to civic values and public service.”

Since its inception in 1946, the Fulbright U.S. Student Program has provided more than 380,000 participants—chosen for their academic merit and leadership potential — with the opportunity to exchange ideas and contribute to finding solutions to shared international concerns. Over 1,900 U.S. students, artists and young professionals in more than 100 different fields of study are offered Fulbright program grants to study, teach English, and conduct research abroad each year. The program operates in more than 140 countries throughout the world.

For more information about the Fulbright program, visit http://eca.state.gov/fulbright.