An expert in chemical kinetics and reactions, she was both a “chemist’s chemist” and a mentor and friend to her students 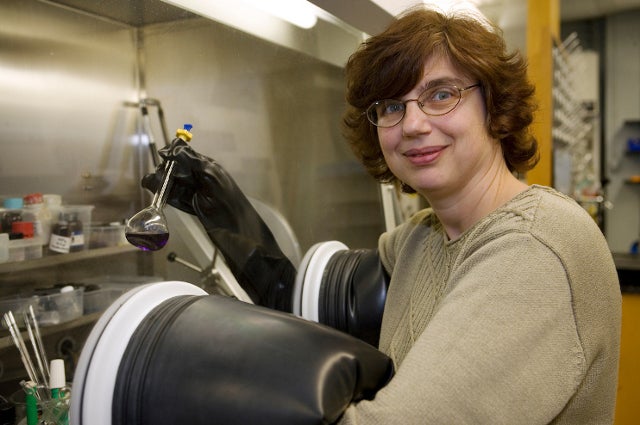 Chemistry professor Elena Rybak-Akimova, who dedicated her life to revealing the life of small-molecule binding and activation and to sharing her passion for science with students, passed away on March 11 at the age of fifty-six. The cause of death was cancer.

A world-class scientist with expertise in chemical kinetics and reactions, Rybak-Akimova’s passion and talent for inorganic chemistry led her to tackle questions “that many of the laboratories in the world do not touch, because the inherent science is complex and requires meticulous and rigorous experiments,” said Krishna Kumar, Robinson Professor of Chemistry and department chair. “But she was a fearless scientist. The community recognized her as a ‘chemist’s chemist’—in that she took on problems that were difficult.”

Rybak-Akimova’s enthusiasm for chemistry, added Kumar, went well beyond the lab. It also translated into being “always generous with her time and her energy,” and not only for Tufts students. “She loved doing demonstrations for Kid’s Day, and she always included some explosions, so the kids would really get excited about science.”

Rybak-Akimova’s research group focused on how small molecules work. She was particularly interested in how nature activates oxygen molecules and the mechanisms by which activated oxygen drives fundamental biological processes. Her studies provided not only new molecular systems for oxygen activation, but also contributed molecular insight into how these reactions work both in the test tube and in biology, said Kumar.

“She was always fascinated by how you can take something as benign as oxygen, that through activation can lead to some nasty chemical characters, such as hydroxyl radicals,” molecules linked to how the immune system works, but also ones that can contribute to diseases, including cancer, he said.

A native of Ukraine, Rybak-Akimova demonstrated an uncommon gift for chemistry, when, as a high-school graduate, she won first prize and the gold medal at the 10th International Chemistry Olympiad in 1978 in Torun, Poland.

Becky Roesner, professor and chair of chemistry at Illinois Wesleyan University, met Rybak-Akimova when she was graduate student in Busch’s group and recalls Rybak-Akimova’s “remarkable intellectual and technical versatility. She approached new projects and techniques with curiosity-driven confidence,” Roesner said, and her “humility, dedication, and good humor made all collaborations and consultations a joy.” She treated students “as if they were already the scientists she believed they could become.”

Rybak-Akimova joined Tufts in 1997 as an assistant professor, rising through the ranks to associate professor in 2003 and full professor in 2009. An exceptionally productive researcher, she published more than 130 articles in peer-reviewed journals and won three faculty research awards. In 2005 she was a visiting scholar at the world-renowned Whitesides Research Group at Harvard. Rybak-Akimova’s commitment to advancing her field led her to organize five Boston regional inorganic chemistry meetings at Tufts; professional activities also included co-organizing a U.S. Department of Energy conference on catalysis science in 2010.

In addition to creating a course in bioinorganic chemistry, she mentored more than ten doctoral students in the Department of Chemistry. One was Ivan V. Korendovych, G06, now an associate professor of chemistry at Syracuse University.

“Smiling, pleasant, and cheerful, she would come to work as it were her second home,” he said. “And it was her second home in many ways. A lot of graduate students would refer to her as ‘motherly’ and we did feel like we were her family. She was our source of inspiration, support, and guidance. Her office door was always open, and she was always there for us: kind, patient, accommodating, enthusiastic, and willing to help. The progress of her students was always of her greatest concern.

“Elena’s hard work is legendary, too,” Korendovych said. “I should not call it work, though. Chemistry was her life. She would often say she would never think of retirement—why would anyone retire from so many new discoveries yet to be made? Her untimely passing came as a shock, and she is leaving a void that is impossible to fill. We will miss her dearly.”

Chemistry senior lecturer Sergiy Kryatov met Rybak-Akimova in Kiev, Ukraine, when he was a fourteen-year-old competitor in the National Chemistry Olympiad and, she, a senior college student, was his coach. He was in awe of her “legendary status” as the only girl in the world to win the gold medal, he said. Serendipitously, after concluding his Ph.D. in 1997 and casting about for a postdoctoral research position, Rybak-Akimova was looking for a research associate. “I was very happy to join her here at Tufts,” he said. “She was my role model, my mentor, my advisor, and a close friend. She was a wonderful human being. It’s a huge loss.”

Kryatov and Korendovych both noted that while Rybak-Akimova’s legacy will also invariably include her determination to make chemistry fun through dramatic chemistry demonstrations that “usually required advanced coordination with the Fire Department,” said Korendovych.

On one occasion, though, she set off the fire alarm by accident. “The department secretary recalled with me how she stepped out of her office to find out what was going on and she Elena was jumping around the corridor, saying, ‘I did it! I did it!’” said Kryatov, with a laugh. “That’s Elena.”

In lieu of flowers, expressions of sympathy may be made in Elena Rybak-Akimova’s memory to Tufts University, P.O. Box 3306, Boston, MA 02241 or at the university’s Giving website; please specify Arts and Sciences for the school and note the gift is made in memory of Elena Rybak-Akimova in the dedication section. Gifts in her memory will be used to create a scholarship for chemistry students.

Details of a celebration of Professor Rybak-Akimova’s life will be forthcoming. Those interested in being part of planning a campus tribute to her life may contact the University Chaplain, Reverend Greg McGonigle (greg.mcgonigle@tufts.edu) for more information.