Mary Shelley’s Frankenstein marks its 200th anniversary this year, a bicentennial that Sonia Hofkosh, an associate professor of English, hopes will bring this groundbreaking novel renewed appreciation. Over the decades, movie adaptations have fed our insatiable appetite for horror—the 1931 cult classic, featuring Boris Karloff’s iconic lurching creature, is only one of many dramatic interpretations—but they rarely rise to the nuanced psychological horror of Mary Shelley’s 1818 masterpiece.

The original novel tells the story of Victor Frankenstein, so recklessly obsessed by the desire to create an ideal human. While he does create a being superior in size, form, speed, and resilience, the creature is so hideous in appearance that no sooner does he open his yellow eyes than Victor runs and hides. In that terrified response, Shelley sets in motion a story about failed humanity, about the loss of love and the desire for a sense of belonging. The creature, doomed to a life of alienation and misery, will exact revenge through multiple murders.

Hofkosh needs no introduction to the original text—it’s been required reading in her course Frankenstein’s Sisters, a comparative study of Jane Austen and Shelley. 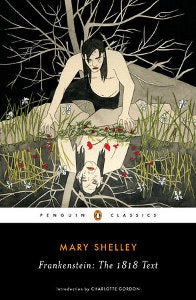 She hopes to see more copies of the book around campus this fall. She is organizing a marathon reading that’s part of the international celebration FrankenReads.

Sponsored by the Keats-Shelley Association of America and supported by the National Endowment for the Humanities, Frankenreads is a series of events and initiatives in honor of the 200th anniversary of Frankenstein, including an international series of readings of the full text of the novel on Halloween 2018. Hofkosh hopes a wide range of Tufts students, faculty, and staff volunteers will contribute to what she expects will be a nine-hour event.

Tufts Now recently spoke with Hofkosh about the enduring relevance of Shelley’s novel—written when she was just eighteen—and why it’s important to reconnect with the “real” Victor and his immortal creation.

Tufts Now: Almost 300 institutions in 35 countries are participating in FrankenReads. What accounts for the novel’s widespread and enduring popularity?

Sonia Hofkosh: I think it remains relevant because it opens up opportunities for readings across all times and all cultures; though it is rooted in the age in which it is written, its central drama transcends any particular era. The creature represents the stranger, the other, the refugee. I see it as resonating for anyone who understands what it means to feel rejected or outcast; anyone outside of the norm or marginalized by difference, whether that difference is related to racial, gender, or sexual identity or, by nationality, religious belief, or ability.

The main point is that the creature is rejected, and in soliciting the reader’s sympathy for—or at least understanding of—his plight, the book keeps resonating for people over and over again.

Talk about how you view the unnamed creature—I hesitate to call him a monster, because he has such highly developed intellect and sensibilities.

He starts out essentially as a baby. He doesn’t know anything, but he does learn and develop and become a sophisticated and sensitive individual who is nonetheless doomed by his horrible looks.

I would argue, though, that it’s not his ugliness per se that’s important, but that the ugliness really reflects other people’s inability to accept what is different. His hideousness is more an external sign of the tension between what one feels inside and how one is perceived from outside.

In the creature’s physical ugliness, Shelley is testing people’s ability to really see another person. Why, she asks, do we take certain standards of beauty to indicate something that is of value, when in fact those standards are as artificially constructed as the creature himself?

He does express incredible loneliness; it’s what drives him to insist that Victor create a mate for him, to ease his misery.

I’ve had students who have said, “You know, Victor is more of a monster than the creature.” And one does feel for the creature. If having desire for companionship can be one of the things that constitute what it means to be alive, to be human, to want to be part of a community, to have love and intimacy with others, then the creature is human.

Reading the 1818 novel reveals the striking liberties that filmmakers have taken. In the James Whale 1931 version, there is that classic scene where Victor is shouting, “It’s alive!” In the book, Victor no sooner sees the monster open his eyes than he runs away and hides. That seems the point on which the whole novel pivots—he does not take responsibility.

Whale was brilliant, but his film skewed just about everything. He has Victor in the laboratory with an assistant, and it was very important to Shelley that Victor was alone, that the creation was a solitary endeavor. They also put a criminal’s brain into the creature, which provides a biological explanation for its violent behavior. That is exactly what Shelley avoids and what makes the book so interesting. She makes you go back and forth, thinking: Who’s at fault for the creature’s behavior? Who’s to blame? Those questions are obliterated if you just implant a criminal brain.

As for Victor, it’s not just that he doesn’t take responsibility. It’s that he becomes so absorbed, so obsessed with the act of creation that he cuts off his own personal relationships to do it. He stops writing to his family; he does his work in hiding. So it’s not the audacity of the creation itself that’s at issue so much as how he does it. Shelley suggests his ambition blinds him to the consequences of what he is doing—which he thinks about afterwards, when he it is too late.

What have been seen as the central messages of the novel?

For so many years it was read as a caution against exceeding human boundaries—against trying to play God. The novel has a subtitle: Frankenstein, or the Modern Prometheus, which I think is important to note because it gives the book a critical mythic framework; Prometheus defied the gods by stealing fire for mankind, and Victor’s crime, as some see it, was to appropriate the godlike power of creating human life—by himself, that is, without a woman.

But I actually think there is another point Shelley is exploring here, too. It’s true that the idea of godly power plays a role in the book’s many references to Milton’s Paradise Lost. The creature, who reads Milton’s epic in the novel, calls out Victor for abandoning him by declaring, “I ought to be thy Adam; but am rather the fallen angel, whom thou drivest from joy for no misdeed.” That challenge to his creator suggests Shelley may be less interested in warning man not to reach too high and more interested in raising questions about the myths and stories through which we understand ourselves and the world we inhabit.

Do you have personal takeaways from Frankenstein?

Ultimately, in my view, the novel is about what it means to be human. How do you define the human? I think she’s recognizing that we take a lot for granted as humans, and she is asking us to think about that. What’s at stake when we act? When we hope or love? Or when we hate? What are the consequences, for us, for others, for the world? That’s one of the concerns that makes her a Romantic writer, meaning a writer who questions established modes of thought to explore new possibilities for personal, social, and political existence.

The Romantics said, look at your assumptions that you accept as truth, and think about them based on your experience and your own capacity for thought, rather than on what you have been told by those in power. Her novel’s multiple narrators and embedding references to other literary and historical texts were Shelley’s way of saying, look at the stories we tell about ourselves. Let’s make new stories or interpret the old ones anew.

And in the end, that’s important because, as she shows through the tragic lives of Frankenstein and his unnamed creature, the stories we live by impact others as well as on ourselves. Our beliefs and our prejudices have effects. Victor has aspirations and ambitions. So does the creature. She’s not saying don’t have them, but consider carefully how you act on them and who or what else may feel the effects of your actions.