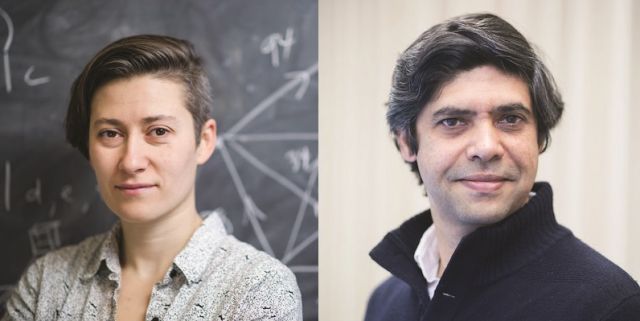 MEDFORD/SOMERVILLE, Mass. (April 6, 2018) – Moon Duchin, Ph.D., an associate professor of mathematics, and Aniruddh D. Patel, Ph. D., a professor of psychology, both of the School of Arts and Sciences at Tufts University, have been awarded fellowships by the John Simon Guggenheim Memorial Foundation.

The Tufts professors were among only 175 scholars, artists and scientists in the United States and Canada to receive Guggenheim Fellowships from a pool of more than 3,000 applicants.

“We are extremely proud to have two faculty members recognized by the Guggenheim Foundation for their extraordinary scholarship and promise in math and neuroscience,” said James S. Glaser, dean of the School of Arts and Sciences at Tufts. “Moon Duchin’s research in geometric group theory and gerrymandering, and Ani Patel’s research in music cognition, embody Tufts’ commitment to the creation of new knowledge through scholarship and innovation. “

In addition to her work as a mathematics professor, Duchin serves as director of Tufts’ interdisciplinary Science, Technology, and Society program. Her mathematical research focuses on geometric group theory, low-dimensional topology, and dynamics. A senior fellow at the Jonathan M. Tisch College for Civic Life, Duchin is also one of the leaders of the Metric Geometry and Gerrymandering Group, a project supported by Tisch College that focuses mathematical attention on issues of electoral redistricting.

Patel specializes in music cognition, which includes the mental processes involved in making, perceiving, and responding to music. Of particular interest in his work are the relationship between music and language, and the processing of musical rhythm. Patel uses a broad variety of methods in his research, including brain imaging, behavioral experiments, theoretical analyses, acoustic research, and comparative studies with nonhuman animals.

Guggenheim Fellows are appointed on the basis of prior achievement and exceptional promise. They are typically at the mid-point of their careers, and often go on to earn Nobel, Pulitzer, and other prizes.

“These artists and writers, scholars and scientists, represent the best of the best,” Edward Hirsch, president of the Foundation, said of the class of 2018. “Each year since 1925, the Guggenheim Foundation has bet everything on the individual, and we’re thrilled to continue to do so with this wonderfully talented and diverse group. It’s an honor to be able to support these individuals to do the work they were meant to do.”

Since its establishment in 1925, the Foundation has granted more than $360 million in fellowships to more than 18,000 individuals, among whom are scores of Nobel laureates, Fields Medalists, poets laureate, members of the various national academies, and winners of the Pulitzer Prize, Turing Award, National Book Awards, and other important, internationally recognized honors.