Tufts Goes to the Marathon 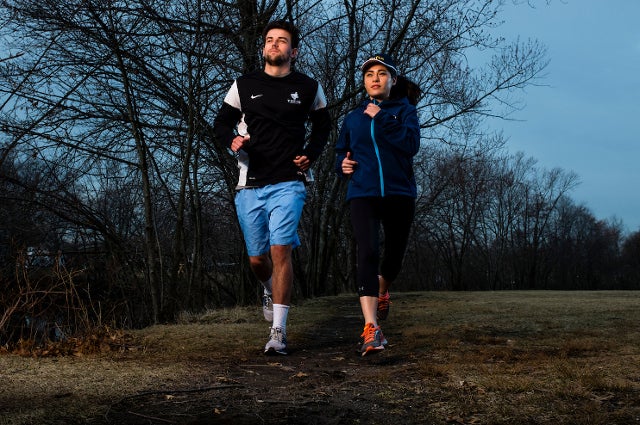 Nathalie Andrade, A18, knew taking singing lessons would open up a new world of musical theater and opera for her—that’s one reason she chose to come to Tufts. She never expected they’d lead her to the Boston Marathon.

But then again, Andrade never expected to meet Emma Daniels, A15. It turns out that Daniels, who Andrade met while performing in the Tufts Opera Ensemble, was training with the Tufts Marathon Team.

Andrade was impressed. She had completed a 5K with a friend and they had wondered, half-kiddingly, “wouldn’t it be wild if we tried to train for the Boston Marathon senior year?” she said. “And we both said, nah, that’s out of our reach.”

But Daniels, a fellow opera singer, “showed me you could be artistic and athletic,” Andrade said. “I thought, OK, this brings it a little bit more into the realm of possibility.”

That realization has brought Andrade to what she describes as a “perfect culmination” of her Tufts education. She is one of twenty-three Tufts students who will run their very first marathon on April 16 as members of the Tufts Marathon Team, a university partnership with health insurer John Hancock.

Now in its fourteenth year, the team, the largest known collegiate marathon program in the United States, will send a total of forty-eight Tufts students, alumni, staff, and friends to the Boston Marathon; each runner is required to raise money to support nutrition, medical, and fitness programs at the Friedman School of Nutrition Science and Policy. (There’s still time to  support the team and help the team reach its $500,000 goal.) 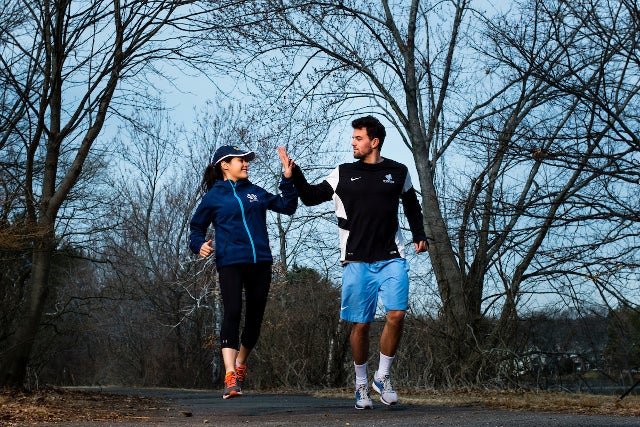 Nathalie Andrade and Conor Coleman encourage each other on a training run for the Boston Marathon. “You’re running for a purpose bigger than yourself—you’re doing it because you feel proud to be part of Tufts,” said Coleman. Photo: Alonso Nichols
For Andrade, the training has revealed that she has, indeed, the physical stamina to run from Hopkinton to Boston’s Copley Square. It’s also been a powerful confirmation that she can do anything she sets her mind to.

“I’m five-foot-two on a good day, and I have flat feet!” said Andrade, who hails from West Palm Beach, Florida. “If I can do it, anyone can do it. Every time I go out, I’m amazed. Wow, I ran eighteen miles this morning. Now I think I can call myself a runner. If anyone says, oh, I can’t run, I say, ‘yes you can, if you want to.’”

First-time marathoners with the Tufts team have plenty of support to carry them toward their goal, much of it coming from Don Megerle, fondly known as Coach. Megerle has been firing up runners from the very beginning of the Tufts Marathon Team venture. He said he tells every team, “We’re all in this together. When you put on that yellow singlet for Tufts—that’s your badge of honor, your badge of courage. It means you can do anything you want.”

Megerle blends that signature positivity with a keen awareness of what runners need to push themselves to reach increasingly tougher goals; his Toyota Highlander that he trails runners in is a veritable supermarket, loaded with water, granola bars, fresh fruit, and his signature peanut butter and jelly sandwiches.

Nutrition and hydration are part of his strategy to make sure his runners don’t get in trouble. He calls it the Tufts Marathon Trilogy Plus One, or TMT Plus 1.

“If you follow these three simple guidelines you will do fine,” he said. “You pace your marathon properly, you drink accordingly at every water stop, and you eat the proper amount at the proper time. The Plus 1 is that you run the marathon with a teammate, so you have their physical moral and mental support. It’s a guaranteed win.”

Conor Coleman, A18, can confirm it works. He’s a first-time marathoner who has had extraordinary success as an athlete: he’s captain of the two-time national championship soccer team. He figured he had physical fitness covered on the playing field and the gym. But could he hold up, mile after mile of solid running?

“I found out it depends on whether you can tap into your mental strength to keep pushing yourself forward,” he said. “It’s the mind-set of endurance. I find what works is not to focus on the aches and pains, but to let my mind wander: sometimes I relive my soccer championship moments in my head. Also, the best thing I did was train with a friend; mine is Gabe Cano, a member of my fraternity. We have conversations as we train, and before you know it, that’s four or five miles we’ve already done.”

For her part, Andrade continues to find support from her running buddy, Phil Goldberg, A18. “We talk and egg each other on, and when one of us isn’t feeling great, we will support each other.”

And sometimes she sings on runs. “It helps boost my mood,” she said.

On one occasion she ran through her libretto for the lead in The Marriage of Figaro as she trained. “I needed to remember my Italian,” she said. “I thought, well, I’m going to be out here for two or three hours anyway, I might as well.”

From a wider perspective, Coleman and Andrade also say that the marathon has given them some valuable lessons.

“I would say my big life lesson is a message I got from both my soccer coach and from Don: you’re doing this for your team,” said Coleman. “You’re running for a purpose bigger than yourself—you’re doing it because you feel proud to be part of Tufts. And that’s what makes this one of my top experiences at Tufts. It’s just awesome to be part of this team; it’s the icing on the cake of a great athletic community at Tufts.”

As for Andrade, her running journey began at Tufts “and I’m going to take it with me after Tufts,” she said. “It’s like the perfect way to end my time at Tufts—to run the Boston Marathon wearing that Tufts cap and jersey. It’s a dream I didn’t know I had. I went from zero to one hundred—and that makes me feel like I can whatever I need to do in my life.”