A Marathon March to Honor Those Who Served

A large Tufts dental school team will trek 26.2 miles in the Tough Ruck, a fundraiser for veterans 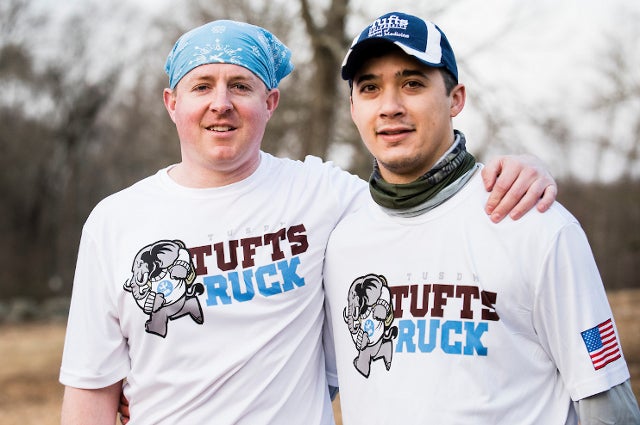 It’s a chilly Monday morning and David Leader, D85, MPH13, is walking the circumference of Lake Quannapowitt with a thirty-five pound pack on his back. The Wakefield, Massachusetts, lake is only about three-and-a-half miles around, but Leader is determined that enough trips will get him ready for April 14, when he will join about fifty others from the School of Dental Medicine for a marathon-length march for a good cause.

Two second-year dental students have motivated their classmates, teachers, and some alumni to join forces for Tough Ruck, a 26.2-mile trek through Concord and Lexington the Saturday before the Boston Marathon. The ruck honors fallen service members and public safety personnel, and raises money for military families through the Military Friends organization.

And as if tackling an almost day-long course in a fickle New England spring isn’t enough, ruckers will carry either fifteen or thirty-five pounds of cargo. In the case of the dental school team, the packs will contain beans and rice destined for the kitchen at the New England Center and Home for Veterans in Boston, provided by the school’s 150th anniversary celebration committee.

The power behind the Tufts team are Brent Mullen and Keith Nguyen, both D20, two Iraq war veterans attending dental school through the military’s Health Professions Scholarship Program (HPSP)—they’ll go back into the service after graduation.

They walked last year’s Tough Ruck—nine hours, with forty pounds on their backs—and decided that this year they’d bring their classmates and professors along. Robert Kasberg, associate dean for admissions and student affairs and a Vietnam-era Navy veteran, arranged for the school to cover the registration fees, and has lent considerable support to the fundraising efforts. He’s also taking part in the ruck. 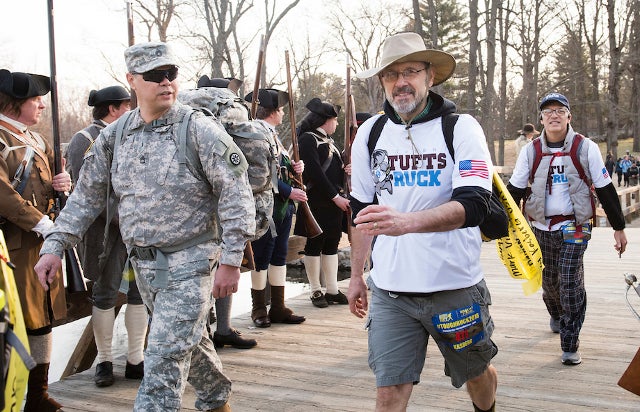 Among the Tufts dental school team on the march at the Tough Ruck this year were Robert Kasberg, associate dean, and following him, Associate Professor David Leader, D85, MPH13. Photo: Alonso Nichols
Too many veterans “fall between the cracks” when they return home, Kasberg said. Supporting causes like Tough Ruck and the Boston veterans center is a wonderful opportunity for the dental school, which sends many graduates into the military dental corps, he said.

“You’re always connected to the military, even after you get out, and I wanted to feel that connection again,” said Nguyen. Last year, he and Mullen, like all Tough Ruckers, received medals from the Boston Athletic Association, the same ones as the runners who participate in the Monday marathon. At thirty-one and thirty-three, they’re among the oldest students in their class—and although they’ve been juggling the infamously heavy workloads of second-year students and just finished a long exam block, they have taken painstaking efforts to make sure the rest of the team is prepared.

For Mullen, that means a preoccupation with wool socks. Folks unfamiliar with a march of this length make the mistake of wearing cotton, he said. He sternly advises his fellow ruckers to don moisture-wicking wool socks, and to bring along two to three extra pairs. “Sweat and blisters will be your worst enemy around mile fifteen,” he said.

While Mullen has run a marathon in the past, a ruck march is different, he said. “I think of this as more of a struggle that’s mental rather than physical.”

Nguyen’s wife, Sarah, who is in the Air Force, will join him on the walk, and the two have done a few practice rucks—but most of Nguyen’s training has come from carrying their twenty-six-pound daughter up fourteen flights of stairs, courtesy of a broken elevator in their apartment building.

How have their professors prepared for the challenge?

Professor Charles Rankin, D79, DG86, an Air Force veteran and faculty advisor to the school’s HPSP club, has also been circling Lake Quannapowitt. “Believe me, at the end of twelve miles, I’m beat. How am I going to do another thirteen or fourteen miles? I’ll be with other people. They can egg you on.”

Mark Nehring, a professor of public health and community service, has been doing ever-increasing loops along the Charles River—his last sixteen-mile outing left him tired, and, he said, a little nervous about the prospect of an additional ten miles. “The ruck will be work; the weather may be an additional challenge, but it will be fun and benefit others,” he said. “Brent and Keith are doing this for all the right reasons.”

Some of the dental school crowd got a chance to test their stamina earlier this year, when they participated in a forty-one story stair climb to raise money for the American Lung Association. Leader finished the climb among the top 20 percent of participants, and he’s equally optimistic about Tough Ruck. “I know I can do it.”