A triple Jumbo and expert in signal processing, he taught at Tufts for some three decades

Joseph P. Noonan, E67, EG69, EG73, a professor emeritus and former chair of the Department of Electrical and Computer Engineering, passed away on April 10 following a two-year battle with cancer. He was seventy-three.

Between his years on campus as an undergraduate and graduate student in electrical engineering, and then teaching—first as a part-time lecturer, and then as a professor starting in 1985—Noonan was a fixture on the Medford and Somerville campus for almost forty years. 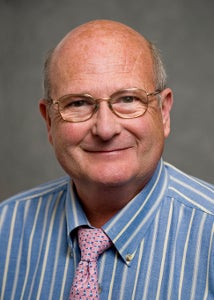 Joseph Noonan received the 1992 Lillian and Joseph Leibner Award for Distinguished Teaching and Advising.
After completing his M.S. in 1969, he began his career with Raytheon Company, working in the field of signal processing. He completed his Ph.D. in 1973, and in 1978 he founded his own company, Bedford Research Associates, a mathematical analysis and scientific software firm.

At the same time, he also served as a part-time lecturer at the School of Engineering. In 1985, he was appointed an associate professor of electrical engineering at Tufts, and received tenure in 1990. He was promoted to the rank of professor in 2000, and was chair of the Electrical and Computer Engineering Department from 2005 to 2007. He retired in 2012 and was named professor emeritus.

“Professor Noonan will be greatly missed by all those he touched in his accomplished life, and by the Tufts community that has been enriched by his expertise and his dedication to students,” said Jianmin Qu, Karol Family Professor and dean of the School of Engineering, in a message to the community.

In 1992, Noonan received the Lillian and Joseph Leibner Award for Distinguished Teaching and Advising. “Students remembered him as a fair teacher who rewarded hard work, participation, and effort, and who made difficult material fun to learn,” Qu said.

Noonan’s expertise was statistical communication theory, which seeks to understand and mitigate the problem of noise and interference in electronic communication devices and systems through the use of advanced mathematics. He published more than one hundred papers in scientific journals and conference proceedings, and was granted a U.S. patent.

He is survived by his wife Sandra, their five children, thirteen grandchildren, and his brother Philip and his wife Paula.

A funeral mass will be celebrated on Monday, April 16 at 11 a.m. at St. Mary Parish, 25 North Road, Chelmsford. For more information on funeral arrangements, please see this obituary.