Budding Nutrition Businesses Get a Boost 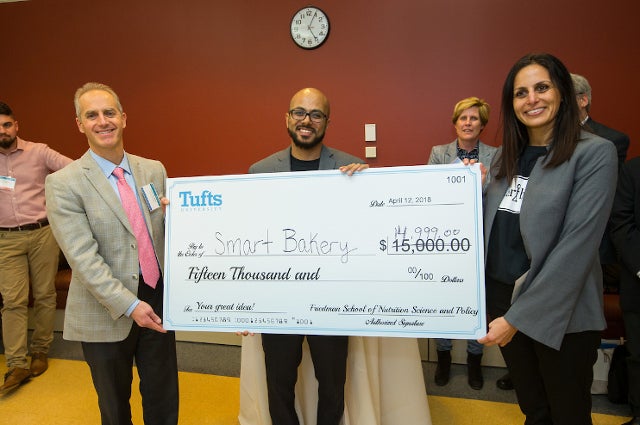 Shrestha, a project manager at the Friedman School’s Nutrition Innovation Lab, and Adhikari won $15,000 for their proposal to establish a bakery that would sell cheap, healthy lentil curry in fortified bread bowls at a school in a rural village in their native Nepal.

“We’re extremely grateful that everyone thought it was a good idea. To have this support really means a lot to us,” said Shrestha. “It’s such a great opportunity and it’s wonderful that they’re encouraging entrepreneurship here at Friedman.”

Twenty-four teams submitted their business ideas for the competition, which was sponsored by the Friedman School in conjunction with the Tufts Gordon Institute but open to the entire Tufts University community. The seven finalists who presented gave five-minute pitches and answered questions from the judges (and in a few cases, from audience members) for ten minutes.

Second place was a tie between two app ideas. One is OptDiet, a Chinese personal nutrition app proposed by Friedman students Xinge Ding and Yan Bai;  Ying-Ju Li, F16; and MIT alum Perng-Hwa Kung. The other, presented by Dylan Anderson-Berens, N17, Ulruch Dossou, and Lauren Betz of GleTech, is a mobile app linking small farmers in Benin, in West Africa, to buyers in an online market and coordinating cold-chain solutions to keep food fresh during transportation. Each team took home $3,750.

“This entire competition and hearing the other contestants really inspired us to move forward,” said Ding. “We’re really passionate about this project and we’re convinced we can make a difference.”

Many of the fourteen judges, who included entrepreneurs, venture capitalists and experienced food business executives, also served as mentors to the finalists. The PepsiCo Foundation and Bunge were platinum sponsors of the competition.

The competition ties into the school’s larger entrepreneurship program, Friedman School Dean Dariush Mozaffarian told the audience, which includes a nutrition entrepreneurship course; links to existing food accelerators and incubators; a network of entrepreneurship advisors; and an innovation council to be launched later this year.

“Entrepreneurship is not the same as business or profit. It’s about bringing together a new idea with the intellectual resources and human resources and capital resources to get it done,” Mozaffarian said. “Whatever any of you want to do in the world, whether it’s social, for-profit, or government, if you’re losing money, eventually you’ll shut down. So thinking about the economics of what we do is crucial.”