Marathon Memories: Bring It On

It was a wet and cold Boston Marathon this year, but inspiration kept this runner going 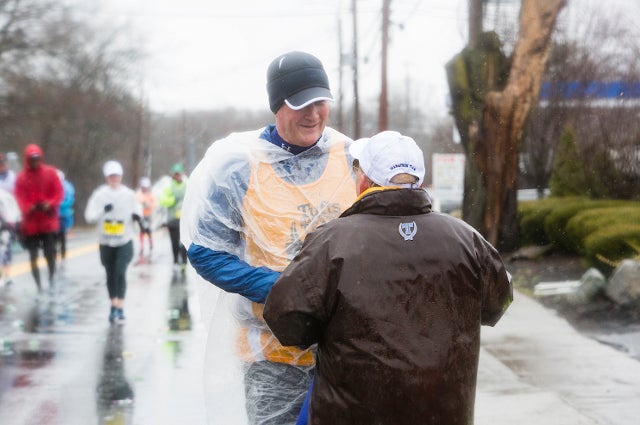 Editor’s note: For the past sixteen Boston Marathons, the Tufts Marathon Team, a dedicated group of students, staff, and other Tufts community members, have run to raise money for the university. This year, John Hancock provided bibs for fifty team members. Three were injured during training, but the rest finished the race despite the relentless rain and near-freezing wind chill that hampered even the most elite runners. The team expects to meet its goal this year of raising $500,000 for Tufts, primarily for nutrition research at the Friedman School of Nutrition Science and Policy.

Eric Johnson, the senior vice president for university advancement, has been a member of the Tufts Marathon Team since its inception in 2003. On Monday, he ran his sixteenth Boston Marathon with the team, and his forty-fifth marathon overall. But even with that many miles logged, finishing a race isn’t a guarantee. Here, Johnson shares some of the cold, wet facts that he and the rest of the team faced on race day, and the bright points—and people—that helped him slog through.

Like most of the runners who had signed up for the 2018 Boston Marathon, I started checking the long term weather forecast about a week away from race day. The only condition I was worried about was a warm day, which seemed to be likely considering how cold and snowy the weeks leading up to the race had been. So when the forecast showed rainy and windy conditions, I was happy. No hot weather! I don’t do hot weather very well.

When race weekend came, the forecast continued to show rain and wind – but it seemed to be getting more serious. Thirty to forty miles-per-hour headwinds? Pouring rain and possibly sleet? I was confident the forecasters would be wrong as usual. But I did buy a new “water resistant” shell to add to my layering possibilities.

The night before the race, we always have a Tufts Marathon Team dinner for our runners and their families. It is always fun to see these students, alumni and friends ready to run a marathon the next day—and most had never run even a half marathon six months before. The talk at the dinner is focused on the weather—and how our amazing Coach Don Megerle has prepared us all for the day ahead.

I woke up on race day and looked out the window to see heavy rain coming down sideways. I decided to wear my “water resistant” trail running shoes and my “water resistant” pants in addition to several layers and my new shell. I was also prepared with two green trash bags to bring to the runner’s village so I could have a dry place to sit. 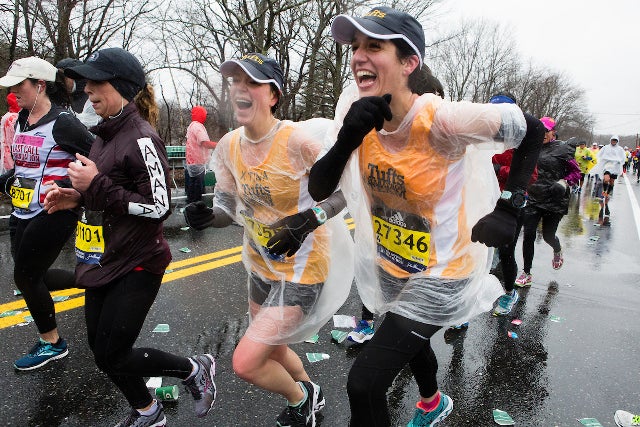 Christina Matulis, M18, left, and Marianna Papageorge, M18, of the Tufts Marathon Team brave the elements. Photo: Anna Miller
When we got to Hopkinton and got off the bus, reality started to settle in. It was pouring rain and the wind made it painful at times. I was wondering why the pathways leading to the runner’s village were so crowded—I could hardly move. When I finally made it down to the village, I understood what was happening. The fields where all the runners normally hang out before the start were mud pits. Everyone was clinging to any paved surfaces they could find. But I had a problem with that strategy. The port-a-johns were in the middle of the fields and nature was calling. So I put the two garbage bags on my feet and slid down the hill and made my way through the water and mud.

I should preface this by saying that the one thing I hate about endurance events is port-a-johns. Waiting in lines to use them and then the awful experience of having to enter one. But I noticed something—I was warmer and sheltered from the rain and wind in the port-a-john. It was the least sucky place to be in the whole runner’s village. I could have stayed in there all day. But enough about port-a-johns. It was time to race.

I made my way across the fields and found one final obstacle to just getting to the start line. The muddy hill that I had slid down was nearly impossible to get back up without crawling. Fortunately, there were a number of runners who had gone through the same thing who formed a human chain to pull me up. Off to the starting line. 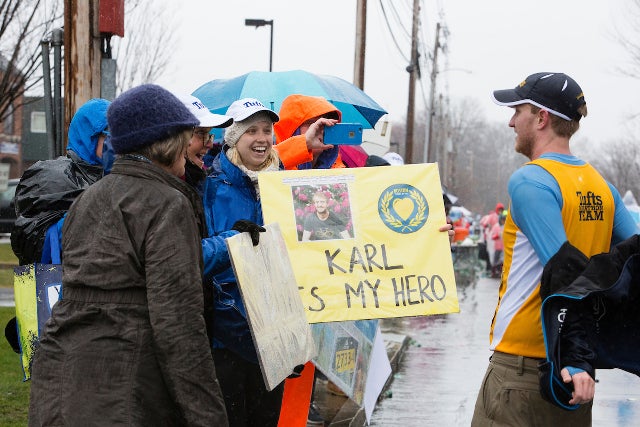 Karl Cronburg, a doctoral student in computer science, gets a boost from his supporters in the marathon. Photo: Anna Miller
The rain subsided for a time while I was heading to the starting line, so I took off the trash bag I had over my head and got ready to run. Big mistake. The skies opened up shortly after and all of my “water resistant” products failed the test. I was soaked from head to toe—especially toe. I could hear the squishing noises with every step. This was going to be a fun day.

Once the race started, I tried to settle in to a comfortable pace. And for a while the rain slowed and I started to heat up. I decided to take off my fleece jacket and pitch it since I still had three layers on. A good example of not following your own advice. Less than thirty minutes later it was raining harder than ever, the winds were howling and I was freezing. So I went to one of the water stops and begged for a plastic bag to pull over all my layers. Fortunately the volunteers took pity and I had some extra protection.

With each mile I was getting wetter and more miserable. And I started to wonder if it was worth it. I could Uber it and be in a hot shower in thirty minutes! But I knew Coach Megerle would be at mile 9 with the Tufts parents and friends. He would have a PB&J sandwich for me and would give me inspiration to continue. As I made my way to mile 9, nature kept calling. I was not sure if it was for real or just an excuse to “enjoy” the shelter of the port-a-johns.

I made it to mile 9 and found Coach Megerle. He had the sandwich for me which worked wonders. But he was shivering and I was pretty sure I was the slowest runner keeping him from getting on a warm bus to see the rest of the team finish. Not quite the inspiration I was looking for, but I soldiered on.

I expected to see no one on the course to cheer us on—I certainly would have stayed warm and dry and watched on television. But while the crowds were thinner than usual, they may have been more enthusiastic. Admittedly, much of that enthusiasm seemed to be fueled by adult beverages. But whatever it takes. 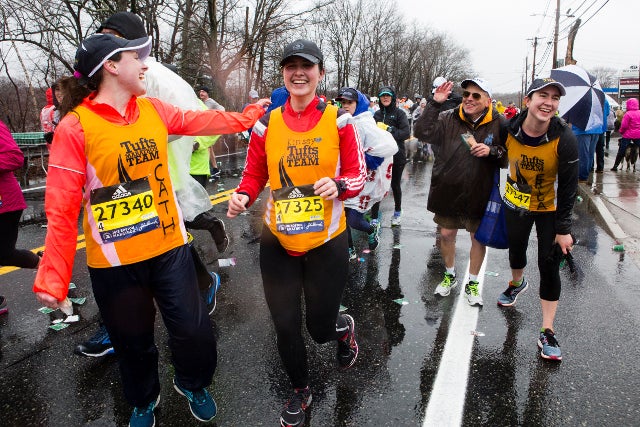 Tufts Marathon Team members Catherine Sillari, A18, left, Kinsey Drake, A18, and Erica Massaro, G18, greet Coach Don Megerle as the rains lets up just a bit. Photo: Anna Miller
I had one of my better stretches after mile 9. I think it was in part due to the PB&J, but also to the sound tunnel at Wellesley College which I could hear from what seemed to be miles away. Who can stop running with all that enthusiasm on the horizon?

Almost as soon as I passed the students at Wellesley, I hit a serious wall. The rain and wind seemed to be relentless and my thighs were just rigid from the cold. Hard to get them to cooperate. But then I remembered that my friend Brian was going to be at mile 16, and he promised he would have dry socks and a banana for me. I can run four more miles for a banana and dry socks.

I made it to mile 16 and sure enough Brian was waiting for me. The banana was great. But I realized that I was too stiff to lean down and change my socks. And it’s asking a lot of someone to change your socks. I thanked him for the banana and hit the road.

The crowds were an inspiration as were all the volunteers at the water and medical stops along the way. But my biggest inspiration was seeing all the amazing runners with me—most of whom were running to raise money for charities. I tried to keep up with a woman who proudly proclaimed on her shirt to be seventy-five and running her tenth marathon since beating breast cancer. She left me in her wake. And there was a runner in the eighty-plus age group who I may have beaten, but perhaps not.

At a certain point in any marathon, I get to the point where I am running/walking with the same group of runners. You pass and get passed by the same people depending on who is running at the time. Around mile 24, I was with a guy running for Dana Farber. Every time the heavens opened up, he would raise his arms to the sky and yell “Bring it on.” I used that as my mantra for the final painful miles. That and the thought of having my beautiful wife pamper me when I finished brought me home.

I will never underestimate rain and wind again. What an epic day for a run…