The Long View on Nutrition and Aging 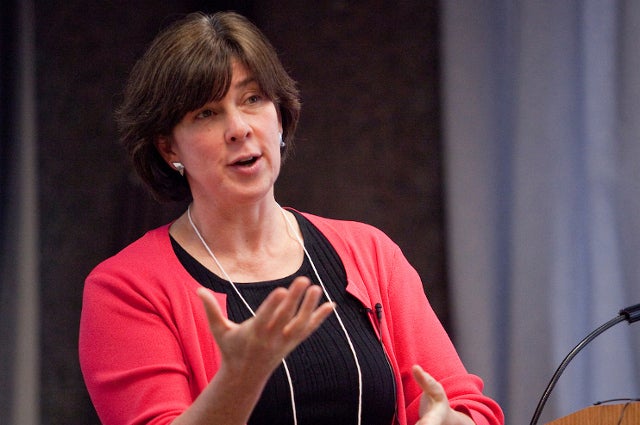 In May 2017, Sarah Booth had been interim director of the Jean Mayer USDA Human Nutrition Research Center on Aging (HNRCA) for only months when she was hit with a bombshell. President Donald Trump proposed a budget that would eliminate the HNRCA’s federal funding, jeopardizing its existence.

Almost immediately, Booth heard from administrators at Tufts and the USDA, promising that they would fight alongside her to keep the funding intact. With their support, she spearheaded a campaign to highlight the many ways that this forty-year academic/government collaboration has benefited society with its solid science.

The vocal support, which helped secure funding for the near future, was invigorating. “It was probably the turning point at which I thought I really want to be the center director, because now I know what I’m fighting for,” Booth said. “While it was traumatic it also presented us an opportunity. And we ran with it.”

Booth, a longtime researcher and the former associate director at the HNRCA, was appointed permanent director in February. She is using her platform to show that as Americans are living longer the science coming out of the center is more crucial than ever.

“As one gets older, there is more divergence between chronological age and biological age,” she said. Yet the Recommended Daily Allowances currently lump everyone over seventy into the same age category. “There’s growing recognition that we’re going to have to further expand our guidance for that older age group.”

All of the current federal guidelines on adult nutrition draw on research from the HNRCA, Booth said, and she plans to build on that strength. “We have a really unique role in leveraging our research in nutrition and physical activity for helping individuals have a longer quality of life and more independence. Because we’ve had this continuous funding for forty years, our science can build on itself—it’s not confined to a five-year grant period. That is something I believe we are very strong at and I’m going to continue to promote.”

While healthy aging remains the center’s focus, Booth wants to encourage work with other centers to look at nutrition throughout the life cycle. For example, HNRCA researchers who study age-related bone loss could work with scientists who investigate peak bone mass in children, she said, so that “through collaborations we will be able to look at the continuum.”

The Key Is Nutrients

Booth was born in England and grew up in Canada, where she earned a biology degree from McGill University. After graduation, she spent three years in Nigeria with CUSO, the Canadian equivalent of the Peace Corps, teaching biology and health classes to high school and college students. From there she turned to nutrition, earning her master’s at the London School of Hygiene and Tropical Medicine and her doctorate from McGill. When she joined the HNRCA’s vitamin K laboratory, she thought she would be there for a year. She ended up staying twenty-five (and counting).

Booth became director of the vitamin K laboratory in 2001. Although many researchers are increasingly looking at whole foods and dietary patterns, she has no doubt of the importance of the lab, the only one of its kind in the United States. “We focus on a single nutrient, but we do everything from food analysis to clinical trials,” she said. “We have built such an amazing amount of literature. Sometimes scientists forget that to really do the solid science, you have to plod. You can’t go in five thousand directions.”

Booth also has strong ties to the Friedman School of Nutrition Science and Policy, where she has been a professor since 2006. She has served as chair of the Nutritional Sciences Department and director of the Biochemical and Molecular Nutrition Program, along with sitting on dozens of committees and teaching several courses. She has mentored or advised countless students, a passion of hers since she began teaching at the age of twenty.

“Youth is defined by risk taking and not really knowing what the boundaries are yet. I tend to attract students who like to challenge: Why can’t we do this?” she said. And that, she said, is wonderful. “I have always found that students have pushed me to places I never would have gone. It keeps me on top of my game. The major advances in our lab have always been from my students.”

Although Booth is sure the HNRCA has not seen the last of its funding worries, she’s facing the challenge with optimism. “I have been privileged to see the university and the USDA come together and demonstrate in a very overt way their commitment to the partnership,” she said, “and that has been very, very rewarding.”