Worried about Your Horse’s Nutrition?

There’s going to be an app for that, if two Cummings students have their way 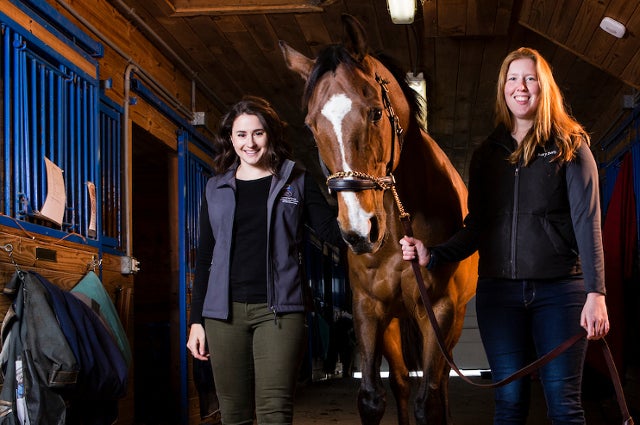 How do you build a successful app? For two veterinary students, the starting point is this: give horse owners what they need. Lauren Ungar, V19, and Mary Davis, V19, are developing an app, Nutracheck Equine, to help owners keep horses healthy by making the best diet decisions. They're now working hard to move their app from business plan to product.

The students know it’s hard to create a successful business, but their concept was already a semi-finalist at The Idea, a veterinary student innovation competition. “We never anticipated we would get this far,” Ungar said. “We’re hoping for more. We think it has the potential for so much growth.” 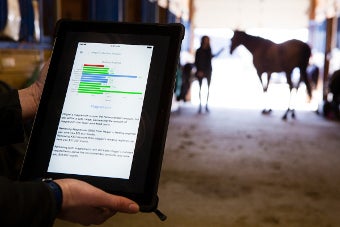 A prototype of the Nutracheck Equine app. Photo: Anna Miller
Ungar, vice president of the Tufts chapter of the Veterinary Business Management Association and a veterinary technician at VCA Sterling Animal Hospital, Massachusetts, has long had an interest in entrepreneurship. When she was first thinking of building an app, Davis proposed they look into horse nutrition.

One summer, Davis’s horse had developed laminitis, a potentially crippling inflammation of tissues in the hoof that “strikes fear in the heart of horse owners.” Fortunately, her horse recovered, “but it was scary time for me,” she said. “It turns out he was getting too many calories from his pasture; we had had an unusual amount of rain and the grass was far too lush for his metabolism.”

Ungar read about new medical technology known as scanning spectrometers used in evaluating livestock nutrition in production plants and realized it had not yet been explored for horses.

Sizing up a promising market opportunity—the closest competitor is based in Australia and its app is more complicated and costly—Ungar and Davis drafted a business plan. Some 70 percent of horses, they wrote, “receive unbalanced nutrition which can contribute to diseases such as colic, laminitis, gastric ulcers, rhabdomyolysis, orthopedic disease, and endocrine disease.” Laminitis alone is a leading cause of death, second only to colic, and affects 15 percent of all horses in their lifetimes. Nutracheck Equine would be an understandable and inexpensive source of accurate nutrition information.

Nutracheck will also easy to use, said Ungar, which should make it accessible for recreational riders and professional stables alike. The horse owner enters factors into the app—such as age, breed, sex, and activity level of the horse, along with variables such as pasture type—and the app serves up recommendations for tailoring the optimal diet for that particular horse.

Over nearly a year of working on the project, the students learned a lot about technology and the business world. They are grateful for introductions made by Cummings School Dean Deborah Kochevar, who also nominated them to attend a hackathon at Cornell to work out technology issues. Coaching from Marilyn Davison, J63, G64, Cummings School friend, businesswoman, and board member of the Tufts Entrepreneurial Center, helped them hone their plan. “I’m really impressed how much they’re doing themselves in terms of prototyping—that’s not easy,” Davison said. “And they’re very coachable.”