Can an engineering grad strike it big with snack foods? 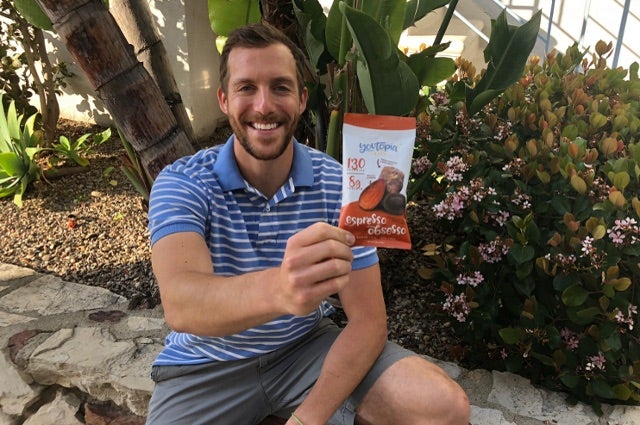 After studying civil engineering and entrepreneurship as an undergraduate, and working in the life sciences and digital marketing fields, the last place Jesse Shapiro, E09, probably expected to find himself was in his apartment kitchen, sealing hundreds of small bags of snacks with the aid of a hair-straightener.

But there he was, launching what was eventually to become his current business venture, Youtopia Snacks.

To be fair, the idea for Youtopia did not come out of the blue. It evolved from a business school project by Shapiro and three classmates for a product then called Officebites—healthy, portion-controlled snack packs available to companies in bulk, on a subscription basis. Shapiro and his co-creators envisioned them as a way for nutrition-conscious cube-dwellers to avoid mindless snacking and empty calories.

Along with developing a sustainable business plan, the team also had to decide exactly what consumers would be biting into when they tore open their Officebites. “The first thing we had to figure out was, what does ‘healthy’ mean? Everyone has a different definition of that,” Shapiro said.

There was a lot of trial-and-error to develop a flavor profile—“we were in my apartment kitchen with a lot of mixing bowls; there was a lot of silly experimenting early on”—and they consulted with dietitians and nutritionists. Ultimately, they came up with a nutritional profile that was relatively high in protein, low in sugar and refined carbs, and portion-controlled at 130 calories per package.

It was indeed a concept that held promise. The original iteration of Officebites placed highly in three venture competitions, including the distinction of “most outstanding venture” in the Business Creation Option at UCLA’s Anderson School of Management. And so, after finishing his MBA there in 2017, Shapiro and another member of the Officebites team borrowed an initial infusion of capital from their families, and dove into the snack business full time.

Shapiro had had a taste of the food business when he did a business school internship at King’s Hawaiian, a sweet bread company in California. But his passion for entrepreneurship was whetted earlier when he took his first course in the subject at Tufts, and decided to pursue a minor in entrepreneurial leadership. “I loved those classes, from the very first one,” he said. After graduating from Tufts, Shapiro worked for a life sciences consulting firm in Boston’s Back Bay, and then at a Boston digital marketing agency before heading to business school in California.

No sooner had Shapiro and his partner picked up their first twenty thousand units of Officebites inventory than they came to an unexpected conclusion: they needed to tweak their business model, and rebrand their product.

“We got some nice early support from friends and family,” Shapiro said. “Then we had a meeting with a possible investor, who got us to understand that this was a snack that was more appropriate for a broader audience—not just for offices, and not just as a subscription box business model. We realized there was a lot more potential.”

And so it was back to the drawing board. A new name; new packaging; new distribution channels and suppliers; a new website. (And, unloading the existing inventory.) Shapiro’s partner stepped away from the business earlier this year. But in late March, Youtopia launched with sales on Amazon. Within a month, the first production run had nearly sold out.

The Youtopia line, which is gluten- and GMO-free, comes in five varieties: Espresso Obsesso, Bananas for Chocolate, So Money Honey Mustard, Honey Bee-B-Q, and Cocoa Gone A Lil Loco. They contain a combination of either flavored cookie puffs or fava crisps, along with various nuts, roasted chickpeas, sunflower seeds, and other tidbits.

Shapiro is now preparing for the National Confectioners Association’s big Snacks and Sweets Expo in Chicago in May, as well as starting to engage in discussions with early investors. And, he’s looking at ways to grow Youtopia, including possible retail, vending machine, or food-service distribution. For right now, he said, it’s baby steps—he’s mindful of the words of one of his business advisors: “Fail small, in order to find a win you can scale.”