Feast for the Eyes

A collaborative course brings art, science, and community to the table 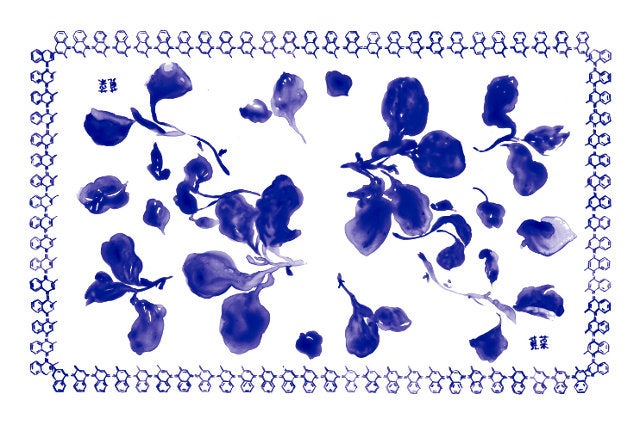 Over the years, Silvia Bottinelli has asked her students to look at food in art—think of Cezanne’s apples and oranges and Andy Warhol’s soup cans—through cultural, political, and other lenses. But for a new class this semester called Food as Sculpture, Bottinelli, a visual and critical studies lecturer at the School of the Museum of Fine Arts at Tufts, asked students to interpret the food depicted with an eye toward something more intrinsic: its nutrition.

Does knowing what’s in foods—the fiber, the vitamins, the good or bad fats—change our understanding of the art? It is uncharted territory for art historians, which is why Bottinelli turned to scientists at the Jean Mayer USDA Human Nutrition Research Center on Aging (HNRCA).

“The fact that the SMFA merged with Tufts opened up many opportunities for collaboration,” Bottinelli said. “I started to look beyond our field. This structural change fostered my curiosity.”

Earlier this semester, students heard an introductory overview from HNRCA director Sarah Booth and then met with six scientists in small groups, learning about micronutrients and RDAs, fibers and phytochemicals.

Gregory Dolnikowski, manager of the HNRCA’s Mass Spectrometry Unit, focused his discussion on milk and the many varieties of milk alternatives—from soy and almond to rice and pea protein—that are now available to consumers. At the next class, the students impressed him with the many examples of milk art they had found, including an artist who bathed in milk, Harold Edgerton’s stroboscope photo of a milk drop in mid-splash, and a sculptor who formed bones from milk-colored plaster.

That last example “was a great connection between art and the science, because you need milk for strong bones,” Dolnikowski said. They talked about calcium, vitamin D, and the many ways milk is important to the body. “It was a wide-ranging, holistic discussion.”

Other students in the course, which was cross listed with Environmental Studies as part of the Food Systems and Nutrition minor, looked at works like Claes Oldenburg’s soft sculptures of oversized hamburgers, sundaes, and cakes. They studied Wheatfield: A Confrontation, in which artist Agnes Denes grew two acres of wheat in a landfill adjacent to the financial district of Manhattan. If the artist’s goal was to ask questions about hunger, economics, and priorities, Bottinelli had other questions: “Why wheat specifically? Was it processed later? In what ways were people empowered to know about the nutritional properties of the food? And what does monocropping mean to the ecosystem?”

Some artists have been clearly concerned with the nutritional makeup of their work. In 1992, the Haha collective built a garden in a Chicago storefront to grow food for people with HIV. It becomes even more meaningful when you know that kale, collard greens, mustard greens, and herbs they grew were thought to boost the immune system. “This was during the AIDS crisis, and a lot of research was yet to be done about a cure,” Bottinelli said. Placemat art by Katherine Wildman, an SMFA graduate student. Photo: Courtesy of Katherine Wildman
In other cases, Bottinelli said, artists have overlooked nutrition, which seemed to her like a lost opportunity. “They could have conveyed so much more, could have had much more impact,” she said.

Take, for example, artist Jennifer Rubell’s 2010 work Old Fashioned, a wall of 1,521 donuts hung in a grid formation. Student Abigail Robichaud, SMFA19, saw that by putting the artwork in a courtyard and letting viewers nibble on the treats the artist was presenting a new-fashioned way of interacting with abstract art. But Robichaud also thinks the nutrition of the work could be updated. A contemporary recipe, she suggested, could take advantage of healthier, whole-grain flours, rather than the white flour in the Dunkin’ Donuts variety.

So did knowing something about nutrition give the artworks more meaning? Sometimes yes, sometimes not so much—just like the scientific process. “It’s good to ask open-ended questions. It’s also important to remain honest when we analyze the results, to not force interpretation onto things,” Bottinelli said.

In fact, Bottinelli structured the class to mirror the steps that both scientists and artists take: starting with a question, drilling down into a subject, and then deciding how to share what they find with the public.

To that end, the class spent the last weeks of the course talking about public art. They were inspired by artists such as Rirkrit Tiravanija, who in 1992 converted a gallery into a kitchen where he served bowls of rice and Thai curry. The conversations and interactions of the people who shared the food became part of the artwork.

That prepared the students to share some of what they learned about nutrition with a wider audience. With the help of Tisch College of Civic Life and the Chinese Progressive Association, one of the HNRCA’s neighbors in Boston, the class invited local senior citizens to a luncheon. The students served brown rice salad, turmeric tea, and other healthy foods from their own traditions.

They created placemats that conveyed bits of nutritional wisdom, often with an artistic twist. Soojin Kim, who is graduating in May with an M.F.A., painted leaves of amaranth, a popular vegetable in Chinese cuisine, and decorated the border with a delicate geometric pattern—the structural formula for vitamin K.

HNRCA scientists joined the conversation, too, interpreting the placemats and answering questions about nutrition and aging.

When the meal was over, Bottinelli said she hoped to keep some of the used placemats, which drips of beet juice and smudges of Greek yogurt had turned into new artworks. It was a reminder of the day that art and science shared a table.