Computer science professor will lead the NSF policymaking board, which she has been on since 2008, for the next two years

The twenty-four-member National Science Board (NSB) is an independent advisor to both the president and Congress on policies related to science and engineering, and also education in those disciplines. The NSB and the National Science Foundation’s director jointly head NSF. 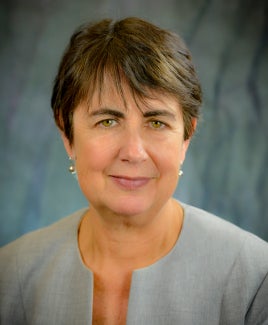 “It’s an honor and a privilege to serve as chair on the National Science Board, a role I take very seriously,” said Diane Souvaine. Photo: Sandy Schaeffer/NSF
Souvaine, a theoretical computer scientist, was first appointed to the board in 2008 by President George W. Bush. President Barack Obama appointed her to a second six-year term in 2014.

“It’s an honor and a privilege to serve as chair on the National Science Board, a role I take very seriously,” said Souvaine. “NSF is the innovation engine of our country and its support of fundamental research and people fuels our economy, strengthens our national security, and keeps the U.S. competitive on the global stage. I look forward to continuing to work with Congress, the administration, the science and education communities, and the director and her staff to ensure NSF’s pursuit of grand visions and revolutionary ideas that result in unexpected advances for our society.”

The NSB vice chair for the past two years, Souvaine also chaired the board’s committees on strategy and budget and programs and plans. She served as a member of the Board’s Committee on Audit and Oversight, helping provide strategic direction, oversight, and guidance on NSF projects and programs. In addition, Souvaine co-chaired NSB’s Task Force on Mid-Scale Research and served five years on the Executive Committee.

Prior to Tufts, Souvaine taught at Rutgers University for twelve years. During that time, she also served for two and a half years in the directorate of NSF’s Science and Technology Center for Discrete Mathematics and Theoretical Computer Science (DIMACS), a groundbreaking academic/industry collaboration of Princeton, Rutgers, Bell Labs, and Bellcore. DIMACS is tasked with both the theoretical development of mathematics and computer science and their practical applications.

In addition to her scientific and policy contributions, Souvaine is dedicated to increasing diversity and advancing women and underrepresented groups in mathematics, science, and engineering and works to enhance pre-college education in mathematics and computational thinking.

Souvaine is a fellow of the American Association for the Advancement of Science and of the Association for Computing Machinery, and was a 2005-2006 fellow of the Radcliffe Institute for Advanced Study. Among many other honors, she was the recipient of the 2008 Lillian and Joseph Leibner Award for Outstanding Teaching and Mentoring at Tufts.

The board also elected as vice chair Ellen Ochoa, director of the Lyndon B. Johnson Space Center. An astronaut, she served as a crew member on four space shuttle missions in a variety of roles. Prior to being named director of the space center, she was deputy center director for five years and earlier led the Flight Crew Operations Directorate, managing the astronaut office and the aircraft operations divisions.

Both Souvaine and Ochoa will assume their new roles on May 11.