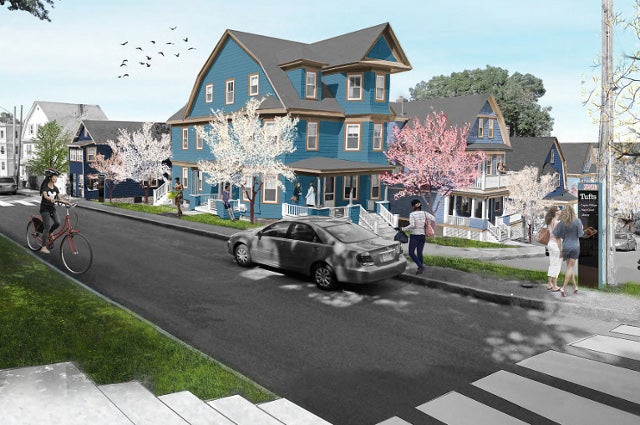 The university will soon begin renovating and converting thirteen wood-frame houses into residences for juniors and seniors. Clustered on the northern edge of the Medford/Somerville campus along Winthrop, Bellevue, Fairmount, and University Avenues, the older buildings—plus a new one—reflect the distinctive architecture and craftsmanship of homes built nearly a century ago. They will each house between six to twelve students.

Tufts planners expect that the first five houses will be ready for occupancy this fall, and by the time the project is completed in fall 2019, the neighborhood is targeted to provide on-campus living for 141 third and fourth-year students.

“We’re excited to be able to create this new approach to residential life,” said Mary Pat McMahon, dean of student affairs. “We believe it provides the gravitational pull that will draw juniors and seniors closer to campus.”

Benya Kraus, A18, president of the Tufts Community Union, and a strong proponent of the new residential community, said students have not only endorsed the concept but also contributed a name: because of its focus on collaboration and co-housing, it will be known as “CoHo.”

It’s not entirely a new concept to have students living in houses—sixteen theme or culture houses, such as the Crafts House, bring like-minded students together across campus. But the new project is the first to deliberately create a neighborhood of wood-frame houses exclusively for upperclassmen.

The new housing also reflects Tufts’ commitment to sustainability, incorporating features such as solar panels, heat-recovery systems, and Energy Star appliances. With donor support, houses are provided with meters and data visualization monitors that will allow real-time tracking of energy and water usage. A sustainability-themed home will be constructed to even higher standards and serve as a case study for classes focused on sustainable design, technology, and climate change mitigation.

The project grew out of recommendations by a university-wide Residential Strategies Working Group, which met during 2015-16 and sought input from neighbors, faculty, student leaders, and Medford city officials. The survey indicated that juniors and seniors “want to live like regular people,” said Matt Austin, associate director of housing operations.

“They want independence,” he said. “This model is a good segue to life after graduation —they’re not entirely off campus, and they have the support of Residential Life, but they’re not in a dorm.”

Ruth Bennett, director of strategic capital programs, said that the wood-frame houses will offer apartment-style living: single rooms and shared kitchens and living spaces. “It’s a more mature setting, as opposed to living in a five-story dormitory,” she said.  Some of the houses will also accommodate graduate resident directors in ground-level apartments.

From a broader perspective, the project addresses the shortage of on-campus housing for upperclassmen. Currently about one third of upperclassman—about 650—live on campus; their options include a few apartment-style residential halls like Sophia Gordon, Latin Way, and the Hillsides, or many traditional “dorm-style” accommodations such as Houston and Miller Halls. Fraternities and sororities and small group houses are also available.

That leaves the remaining two-thirds of juniors and seniors renting apartments off-campus, predominantly in the university’s host communities of Medford and Somerville. The waitlist for on-campus housing is now about five hundred people, said Austin.

The reliance on off-campus housing can contribute to what campus planner Lois Stanley calls the “big disconnect” between students and the college experience, one keenly felt by students who opt to spend junior year abroad. Those students potentially graduate from Tufts having spent only two years living on campus.

“We want more juniors and seniors to have that whole campus experience—to have a sense of community,” she said. “This generation is attached to social media and electronics, but they also crave and want face-to-face connection.”

Austin said the project also addresses concerns about rising rents and real estate values, a concern amplified by the expected opening in 2021 of the MBTA Green Line extension connecting Medford to the Boston area transit system.

“The off-campus rental market is really skyrocketing right now,” he said.  “We’re looking at every single way we can creatively increase the number of beds that we have on campus—and obviously do the right thing by our students.”

Giving the clustered houses a distinctive presence on campus is another priority, and houses will likely take on intentional themes, said Austin. “Theme houses definitely bring a different dynamic to the community,” he said. “They’re an opportunity for students to showcase what they’re interested in and to share that with the larger community.”

Kraus said she envisions that CoHo will give all students an opportunity to have spaces where they feel included and engaged. She and fellow students partnered with CoUrbanize to create an online resource called Brown and Blueprint, which maps how students feel about spaces “and how we can build community,” she said. That data will contribute to a general overview of spatial inequities that she expects can inform future residential life strategies.

“My vision is that the wood-frame housing will create its own ecosystem and foster a co-responsible culture,” Kraus said, “not just within itself, but across the whole Tufts campus. I hope from the get-go that we build with the intention of creating community.”