Do We Need to Worry About Nipah Virus?

As an outbreak continues to claim lives in India, a Tufts expert explains the rare and deadly viral disease’s origins and why the world needs to pay attention 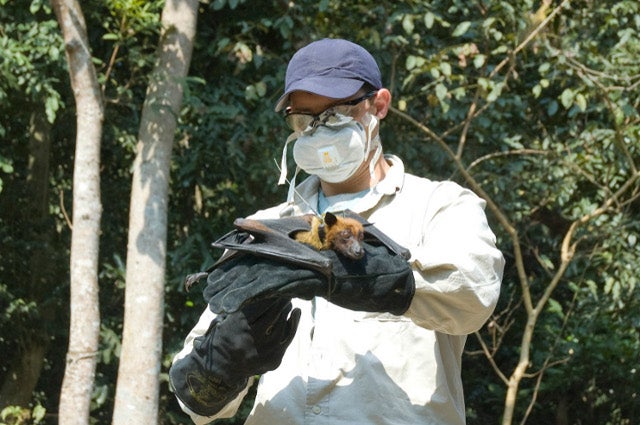 A recent outbreak in India of Nipah virus encephalitis, an often-lethal viral disease with no cure, has set off international alarms over the virus’s potential to become the next threat to global health.

Nipah outbreaks start with a spillover of the virus from its natural reservoir—in this case, giant fruit bats, which don’t get sick from it—to either humans or livestock that come into contact with people. Once the virus gets into people, it can spread from person to person through close contact with bodily fluids, typically from people who are very sick with Nipah to the family members or health-care workers caring for them.

The virus causes severe brain swelling called encephalitis, and in some cases respiratory disease, and typically kills three-quarters of the people infected. So far, the virus doesn’t spread too easily from human to human, said veterinarian and epidemiologist Jonathan Epstein, V02, MPH02, who has studied the ecology and epidemiology of Nipah virus since 2003.

But with every spillover of the Nipah virus from bats to humans, there are worries that a strain that is more easily transmitted among people might emerge, said Epstein, vice president for science and outreach at EcoHealth Alliance, who has adjunct faculty appointments at both Tufts School of Medicine and Cummings School.

Epstein spoke with Tufts Now about the origins of the Nipah virus, why the World Health Organization has named it one of its top ten priority pathogens of concern, and what we know so far about the outbreak in India, where Nipah had killed at least fourteen people as of May 30.

Tufts Now: The Nipah virus is as deadly as Ebola, correct?

Jonathan Epstein: Yes, it’s comparable. Every outbreak has its own case fatality rate, and outbreaks can vary a lot in how easily they spread among people and how deadly they are, depending who gets infected and the genetic strain of the virus itself. But in general, Nipah tends to have an average case fatality rate of 75 percent—and some outbreaks have been 100 percent fatal. From that perspective, Ebola has had similar mortality rates.

Do we know what caused this outbreak?

We don’t know exactly, as there isn’t good information yet on how the original human cases were infected. In Bangladesh, there have been fifteen recognized Nipah virus outbreaks—it happens almost every year, like a seasonal disease—and this is the third Nipah outbreak reported in India since 2001. The first known Nipah outbreak was in 1998 on a pig farm in Malaysia, which inspired the plot for the 2011 movie Contagion. 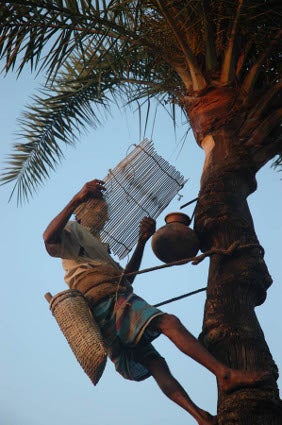 A date palm sap collector uses a bamboo skirt to cover an area of shaved bark on the tree and protect the sap from bats, a method of making date palm sap safer to drink that is being tested in Bangladesh. Photo: Courtesy of EcoHealth Alliance
In the majority of previous outbreaks in Bangladesh and India, the initial spillover of the virus was via contaminated food, typically date-palm sap. To collect the sap, people shave the bark off date-palm trees so it runs into a collection pot. The sap is then either consumed fresh as a sweet drink—a delicacy similar to sugar-cane juice—or allowed to ferment. Humans may become infected with Nipah virus when bats come at night to lick the trunks of the trees as the sap is flowing down and as they enjoy a sugary drink, they contaminate the sap or underlying pot with saliva or urine carrying the virus.

Is there anything especially concerning about this outbreak?

Thankfully, past Nipah outbreaks have been self-limiting because the virus doesn’t spread very easily from human to human. Outbreaks have tended to fizzle out after four or five chains of transmission in humans.

But our worry each time there’s a new outbreak is that a genetic strain of Nipah will emerge that’s efficient at spreading among people, so that we might have another situation like Ebola in West Africa, which killed more than 11,000 people. And with Nipah, we just don’t know if that version is already is lurking in nature.

Is there a risk of Nipah traveling outside India?

Yes, theoretically it’s possible that, if Nipah cases make their way to a city where there is an international airport, someone infected with Nipah could get on airplane and go to another country. That’s why it’s important to keep track of all the cases we know of now and the people they’ve come into contact with—and to limit their travel and make sure they receive treatment in a hospital. The outbreak in Kerala isn’t far from an international airport in Mangalore, but the outbreak appears to be well contained by the Indian public health authorities, so broader spread seems unlikely at this point.

Why is Ebola so much better known than Nipah?

Many more people have heard of Ebola for a number of reasons. For starters, Ebola has been known about since 1976; Nipah virus was first discovered about twenty years later. Ebola also made headlines in late 2014, when people infected with Ebola traveled from West Africa, site of the most deadly Ebola outbreak in history, to the United States and countries in Europe.

Ebola also is a very dramatic and scary disease in that it—in addition to killing lots of people like Nipah—has the pretty alarming symptom of profuse bleeding. Nipah occurs in parts of the world where other diseases that cause less-fatal brain swelling are common—and it can be confused with these and other typically less-deadly illnesses given similar early flu-like symptoms of fever, headaches, muscle pain, and vomiting and sore throat.

Is there any positive news about the response to the current Nipah outbreak?

The good thing is the government of India has capacity to deal with Nipah. The Indian Institute of Virology in Pune has done research and diagnostics on the virus in the past, and India has good public-health infrastructure. A federal investigation into this outbreak was launched quickly, and the country has the resources to contain it. And although there is currently no approved vaccine nor treatment for Nipah, India has reached out to Australia to try an experimental therapeutic in development to hopefully lessen the severity of symptoms and prevent mortality.

How do public health researchers track the disease?

Although there are hundreds of bats species, the research primarily implicates giant fruit bats, which travel quite a long distance to feed at night, up to fifty kilometers—thirty-one miles—from their roost. This means you don’t need to find giant fruit bats roosting where people were initially infected; they could have flown in from ten kilometers—six miles—away to eat some fruit or drink sap in that backyard the night someone was infected. That’s why adequate wildlife testing requires an understanding of bat ecology and behavior; it’s not simply a matter of grabbing the closest bats to the house of the infected person.

Is there going to be bat backlash in India?

We hope not. I’m encouraged to see many Indian news stories reminding readers that bats are both not to blame and are ecologically important. I think we also need to keep stressing that spillover events like this one are, fortunately, pretty rare. And despite there being an abundance of the type of bat that carries Nipah, the body of evidence suggests that the virus is rarely found even in these bats.

People need to remember also that humans are responsible for the route of disease transmission, by cultivating food resources that bats and other wildlife have learned to capitalize on. Date-palm sap is the perfect example. If people didn’t shave the bark off trees, bats would never have access to the sweet liquid flowing inside. So staying safe from diseases like Nipah doesn’t require getting rid of bats, but rather understanding our intertwined relationships so we can make our food safer.