Time and Tides in Boston Harbor 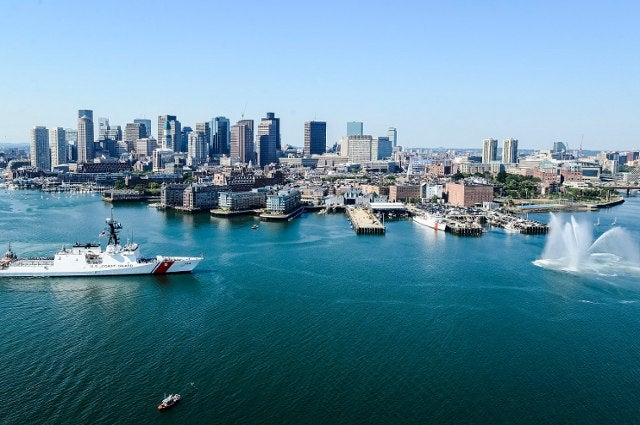 In 1825, a local engineer named Loammi Baldwin, Jr., was commissioned by federal government to build a dry dock at Charlestown Navy Yard. Baldwin began by taking cues from the sea itself, measuring low and high tides every day for several years. Those measurements helped him to design the structure to allow ships in and to keep tides and storm surges out of the dry dock.

Nearly two centuries later, Baldwin’s meticulous, handwritten tables have been put to a new use. Discovered in the archives of Harvard Business School and Massachusetts Institute of Technology by Andrew Kemp, an assistant professor of Earth and Ocean Sciences, the well-preserved notes revealed the early history of tides in Boston Harbor and helped Kemp and several colleagues create a 200-year history of relative sea-level changes, tides, and storm surges in Boston Harbor. That data, when combined with information from other sources, makes up the longest known relative sea-level record outside of Europe—spanning 1825 to 2018. 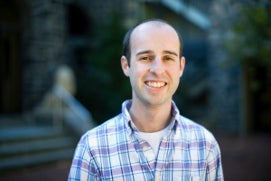 “We should not delay in taking action to prevent the kind of destruction that can come from extreme flooding as a result of storm surges,” said Andrew Kemp. “We need to plan improvements to our coastal infrastructure now.” Photo: Alonso Nichols
Kemp and his colleagues used the new record to predict the impact of storm surges and the possibilities of severe flooding. The storm surges in early 2018 were not the largest to have impacted Boston, but their height is attributed to rising sea level.  Looking to the immediate future, the researchers predicted that a nineteen-year tidal cycle will decrease coastal flooding in the 2020s, but likely increase it during the 2030s. And over a longer time period—the next fifty years—they project that the steady rise in sea level will, correspondingly, have an increasing influence on coastal flooding in and around Boston.

These projections sharpened the focus on flood preparedness; measures such as improving coastal infrastructure and flood defenses should “account both the timing and magnitude of long-term fluctuations and trends in tidal forcing,” they report today in the Journal of Geophysical Research: Oceans.

Put another way: “We should not delay in taking action to prevent the kind of destruction that can come from extreme flooding as a result of storm surges,” said Kemp. “We need to plan improvements to our coastal infrastructure now.”

The research is especially timely given the accelerating rate of sea-level rise driven by climate change and the related vulnerability of coastal communities to flooding and powerful storms. Massachusetts is still recovering from nor’easters that hammered the coast from Boston to Cape Cod this past January and March, bringing coastal water levels to their highest and third highest levels since modern records began in 1921, said Kemp.  The two-day March storm caused at least $23.8 million in damage across six counties.

Kemp said the archival research was a “change of pace” from his usual work in intertidal zones, where he uses sediment cores to reconstruct how and why sea level changed over thousands of years. But historic data, he said, has a value in its own right.

“Measurements of water level remain the most accurate method to detail long-term sea-level rise,” he said, “so we are fortunate to have found this valuable data from Boston’s early history. It also allows us to put current flooding events into perspective and to see the probability of storm tides in the years ahead.”

The data reinforced a growing body of evidence that links climate change to rising sea level—and the fact that the rate of increase is accelerating, said Kemp. The 2016 Climate Ready Boston report, to which Kemp contributed, estimates Boston sea levels could rise by close to 1.5 feet by 2050.

“Elevated water levels that were once rare are becoming increasingly common as sea level rises and the rate of rise accelerates,” Kemp and colleagues report in their new paper “Relative Sea Level, Tides, and Extreme Water Levels in Boston Harbor, 1825-2018.”

The research is a collaboration between Kemp, Stefan Talke at Portland State University, and Jon Woodruff, E96, an associate professor at University of Massachusetts-Amherst. Talke, like Kemp, is interested in old measurements of tides up and down the East Coast, and they received funding from Massachusetts Sea Grant to track down the old tide gauge measurements from Boston.

Kemp headed to MIT archives to look at the papers of John Ripley Freeman, a civil engineer (and MIT alumnus) who designed the Boston municipal water supply and the Charles River dam, and whose many accolades included a Tufts honorary degree in 1905. Freeman’s papers indicated that he knew that Laommi Baldwin, Jr., had collected data on tides in Boston Harbor and tried to use that data to estimate how quickly Boston was subsiding, one cause of sea-level rise. But Freeman did not have access to all of Baldwin’s papers, which were later transferred to Harvard, a fact that caught Kemp by surprise.

The tip from MIT archivists led him to that even earlier material at Harvard Business School, “and it turns out that was a lot of the information that we really needed,” Kemp said. He found about forty-two months of Baldwin data, spanning 1825-1833, recordings made between December 1825 and July 1827, and during the construction of the dry dock. Importantly, the archives at Harvard also included Baldwin’s notes and correspondence, which provided the key information to link the old measurements to more recent ones made in Boston Harbor since 1921 by the National Ocean and Atmospheric Administration.

The researchers combined the Baldwin data with other archival data, such as forty years of Navy records spanning 1847 to 1911 found at the National Archives. When merged with records started by federal agencies in the 1920s, the new research forms the longest known sea-level record outside of Europe. The researchers found that the three largest storm tides—tides elevated due to nor’easters and hurricanes—occurred in 1851, 1909, and 1978—followed by January 2018.