More Than a Swim Coach 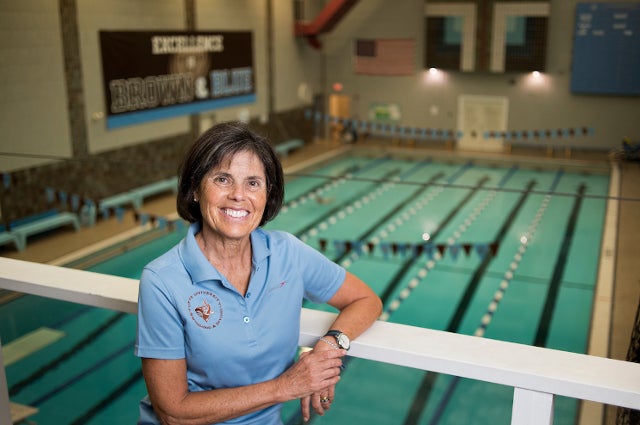 Courtney Adams could not have been more undecided about what she wanted her career path to be when she enrolled at Tufts in 2008. But during four years swimming under head coach Nancy Bigelow, her choice became clear.

“I started looking into fields where I could work with other people and make a more direct impact,” said Adams, an All-American who graduated in 2012. “This is where I looked to Nancy for guidance, and recognized the massive impact on others that she had in her daily life.”

After two years in the Teach For America program working with inner-city youth in Milwaukee, Adams is now teaching fifth grade in Mequon, Wisconsin. She also coaches the girl’s swim team at Homestead High School in Mequon.

“I hope to emulate Nancy’s innate ability to connect with her athletes and make a lasting impression on them in my own teaching and coaching career,” Adams said.

Bigelow, who will retire at the end of this academic year, mentored hundreds of young men and women during a forty-three-year career that includes the last thirty-six seasons at Tufts. Some became doctors, engineers, and lawyers, but it’s the many students who followed in her footsteps who most appropriately honor her lifetime in coaching.

“As a coach, you get to know people better,” Bigelow said. “You get to spend more time with them and you feel like you can help them more than simply teaching them how to do something.”

Bigelow grew up on the campus of the U.S. Military Academy in West Point, New York, where her father was the dean of the academic board and chair of the athletic board. She says Bobby Knight, who was Army’s basketball coach at the time, owes his career to her father, who stood up for the abrasive coach when others wanted to fire him. Knight went on to great success with the Indiana Hoosiers.

“Every year my parents would get care packages from Indiana Basketball,” Bigelow said.

She became a talented swimmer, particularly in the backstroke, and competed in the Junior Olympics. The youngest of five siblings, she wanted to make her own name and went to Pennsylvania State University starting in 1971. 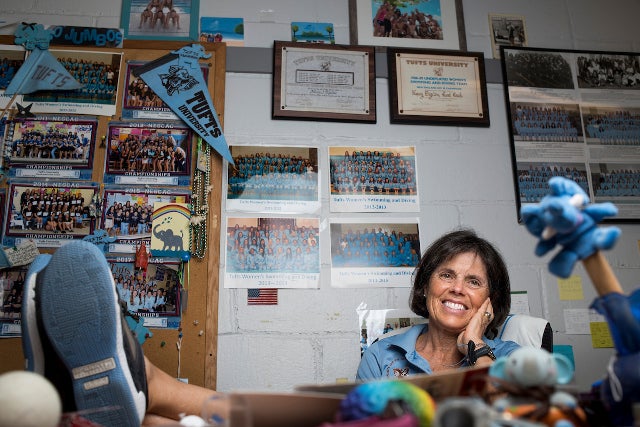 Nancy Bigelow finally has time to put her feet up. Photo: Alonso Nichols
The landscape of collegiate women’s athletics was changing. Title IX, the federal legislation which prohibited discrimination in education on the basis of sex, was passed in 1973 while she was at Penn State. Opportunities for women were improving.

“When I first went as a freshman, play dates were still kind of the thing,” Bigelow said. “They were just coming out of that phase of athletics where a bunch of field hockey teams would get together and then they’d have punch and cookies afterwards.”

Title IX also provided more professional opportunities at the college level. Aged twenty-two, Bigelow was hired as the fencing and volleyball coach at Wellesley College, and soon took over as swimming head coach.

Though she went back to Penn State as an assistant coach for two years, it was the contacts she made while at Wellesley which helped her get the Tufts job in September 1982. She quickly helped establish the Jumbos as a force in the region, winning New England championships in 1986, 1987, and 1989.

Similar to her experience at Penn State, Tufts was at the forefront of embracing Title IX, Bigelow said, led by Tufts Director of Athletics Rocky Carzo.

“I remember coming back from Bowdoin, getting off the bus, and walking into a basketball game and Rocky rushing to the door asking, ‘How’d you do? How’d you do?’” Bigelow said. “They were genuinely interested and concerned and that was always a good feeling.”

Unique to swimming and a few other select sports, the men’s and women’s swimming teams often practice and compete together. As a young coach Bigelow was mentored by former Tufts men’s coach Don Megerle, who was well respected on the national level. She was also able to make an impression on the lives of the male athletes.

“The thing that I have always admired about Nancy is her energy and her ability to get things done,” said Austin Wood, tri-captain of the 2015-16 men’s team. “Whereas other people seem to have on days and off days, I can’t think of a day in my entire time at Tufts where she seemed off.”

In 2015 Bigelow stepped down as women’s head coach, but continued to work with the teams as associate head coach. This past winter she capped her career by helping the men’s team win its first-ever NESCAC title. She celebrated by jumping into the pool at Bowdoin College fully clothed.

“Given the amount of time we’ve spent together, I consider Nancy to be extended family and will miss her greatly next year,” said Tufts head coach Adam Hoyt. “Her values and teaching will live on through the coaches on staff she’s worked with and the many athletes she’s helped develop over her career.”

Bigelow lives in nearby Winchester with her husband Bob, a former NBA player she met in the Tufts training room while he was working as an assistant coach. They have two sons, David and Stephen. She’s close enough that she plans on returning to Hamilton Pool as a volunteer even in retirement.

“What really kept me going all this time is watching the kids grow,” she said. “We’re here to help these kids grow as people, not just as athletes. Watching them turn into some amazing human beings in many different venues is really gratifying.”

Paul Sweeney, the director of Athletics Communications, can be reached at paul.sweeney@tufts.edu.