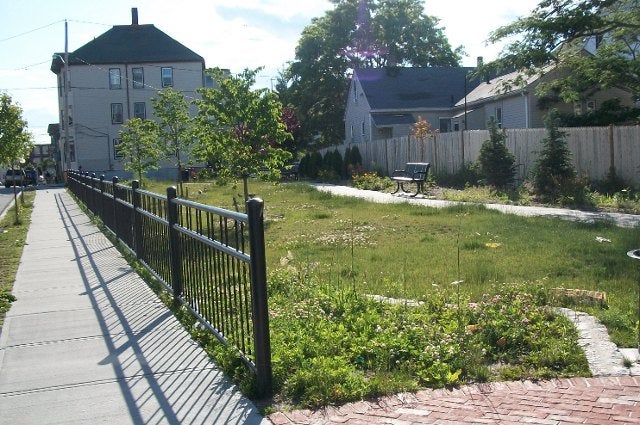 We’ve all seen the photos of Detroit when it was at its lowest point after the 2008 recession: street after street of vacant lots and abandoned homes—a city in visible decline. It might have been the poster child for urban blight, but those problems are more common than one would think in poor neighborhoods in many medium-sized cities around the country.

For an expert in urban planning like Justin Hollander, this raises a critical question: what’s the best way for cities to deal with those vacant and abandoned properties, which drag down neighborhood values and create a vicious cycle of poverty and deterioration?

The usual answer for struggling cities is to bring in new jobs, grow the tax base, and gentrify poorer neighborhoods. The problem with that approach is that the poor people in those neighborhoods are inevitably pushed out, move somewhere else, and the cycle begins anew, said Hollander, A96, an associate professor in the Department of Urban and Environmental Policy and Planning. 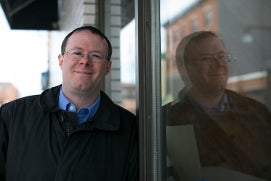 Cities “should have a diversity of types of neighborhoods—but even in the poorest of poor neighborhoods, there is no need for there to be vacant lots and abandoned buildings,” said Justin Hollander. Photo: Matthew Healey
He has previously done urban planning research in New Bedford, a small waterfront city in southeastern Massachusetts, and knows it takes a different approach to dealing with vacant and abandoned properties. In his latest book, An Ordinary City (Palgrave Macmillan), he explores in depth New Bedford’s approach, which he calls urban absorption.

Property owners there bought up distressed neighboring properties, and reused them for everything from parking to urban gardens. The result was a turnaround. “It was not blight anymore—no drug dealers are going to set up shop and do their thing,” Hollander said.

What was behind that transformation? “I wasn’t able to point to any specific city policy or initiative that said that we’re going to put this land back into reuse—it was really the decisions of thousands of individual landowners and investors,” he said. “The market was working; this land is valuable, people are reusing and repurposing it, taking a dense city and making it less dense.”

That’s not to say that city officials didn’t help move this process forward. “I think cities can learn from New Bedford and can try to set up systems and rules and regulations that make this reuse easier to happen,” Hollander said. 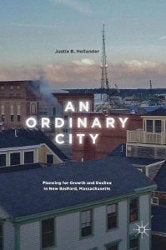 Zoning regulations in many ways “are a big inhibitor of this kind of reabsorption,” in part because those rules are often counterproductive and difficult to change. In many residential neighborhoods, for instance, agricultural land use is forbidden. But if you have a large vacant lot, growing food in an urban farm makes far more sense than leaving a property unused.

“In some cases even light industry makes sense,” Hollander said. “That’s the kind of creativity that city governments can bring to the table to facilitate the reuse of these abandoned properties. I think it’s worth it to put the effort into it, and make the zoning fit what the market demand is.” The cities, he said, can be active partners with property owners and neighborhood association to rescue abandoned properties.

Another advantage of this approach is that it’s not gentrification: nobody is getting pushed out of their neighborhoods. “I think cities should be able to accommodate poor people and rich people and everyone in between,” said Hollander. “They should have a diversity of types of neighborhoods—but even in the poorest of poor neighborhoods, there is no need for there to be vacant lots and abandoned buildings.”

With the publication of his book, Hollander hopes that that there will be “better receptivity to these arguments around urban absorption, really concrete strategies that can be used to reduce vacant and abandoned properties,” he said. “That direct result would be wonderful.”