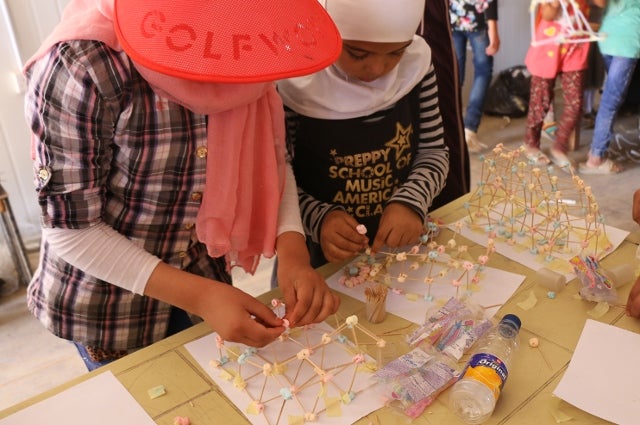 The project seemed simple—create structures out of marshmallows and toothpicks, then test their stability on an earthquake simulator fashioned from ping pong balls and rubber bands. But when Ayman Halaseh, EG15, urged the children to “go bigger—make a building,” they stared at him blankly. Their teacher explained the problem: these kids had never seen a multi-story building.

Halaseh was leading the science workshop last summer at Zaatari, a refugee camp in Jordan that houses nearly 80,000 Syrians, the youngest of whom have never lived anywhere else. He and his wife, Shirin Haddadin, will visit their native Jordan again later this month to expand their volunteer effort to improve science and engineering education for refugee children there.

“Refugees deserve to thrive, not just survive,” Halaseh said, explaining why they’re devoting their summer vacation to bringing science materials, teacher training, and workshops for kids to refugee camps. “We are empowering the next generation. These are the future engineers who will go back to rebuild their cities.” 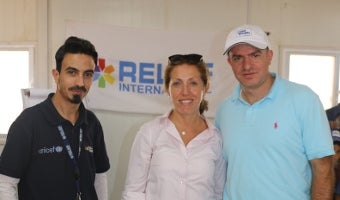 Ayman Halaseh, EG15, right, with his wife Shirin Haddadin and a refugee camp worker. Photo: Courtesy of Ayman Halaseh
This summer, Halaseh, who works as a civil engineer at CDM Smith in Boston, and Haddadin, a sixth-grade science teacher in Malden, hope to bring six suitcases full of classroom lab equipment, such as microscopes, magnets, and compasses, from the United States. They will also buy additional supplies in Jordan. They’ve observed how eagerly and carefully the teachers in Zaatari are using the materials they delivered last year. “You’ll see a line of students waiting to look through a microscope, because the whole science lab at their school has only one,” Halaseh said.

In addition to donating materials to six schools—three in Zaatari and three in Azraq, another camp for Syrian refugees in Jordan—the couple will work in partnership with Relief International and UNICEF, which run the schools, to offer training for the teachers. Spending one week at each camp, they will share a full science, technology, engineering, and math (STEM) curriculum in Arabic developed by Boston public television station WGBH for its Design Squad program, as well as STEM teacher guidebooks, which they have translated, from the Tufts Center for Engineering Education and Outreach.

The couple will also offer science days for the schools’ 3,000 students, who will be given fun challenges like building a structure out of drinking straws to hold up a tennis ball, making a tower of newspapers to support a basketball, or shaping an aluminum-foil boat that won’t sink when weights are added. For kids in the camps, these experiences are riveting, Halaseh said.

“Their eyes—you can see them laser-focused,” he said. “Nobody has challenged their brains that way.”

Halaseh and Haddadin are raising money to pay for the supplies they’re bringing and have set up a GoFundMe page with a goal of raising $20,000 for the trip this summer. They are paying their own way, and another volunteer is trying to raise her own funds to accompany them. The couple’s young children will travel with them and stay with relatives while the parents visit the camps.

In addition to expanding their efforts to a second camp this year, Halaseh and his wife are forming a nonprofit and have created an advisory board, including Christine Rioux, EG88, A09, an adjunct assistant professor at Tufts School of Medicine. Halaseh and Haddadin hope to make arrangements to stay in contact with the schools throughout the year, although that’s challenging because the teachers have no Internet connection. 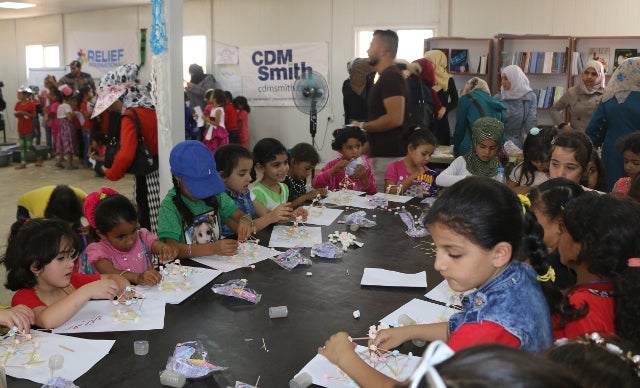 “Refugees deserve to thrive, not just survive,” said Ayman Halaseh. Photo: Courtesy of Ayman Halaseh
In a video supporting the project, Danijel Cuturic, the education program manager for Relief International Jordan, said the program last summer was a big hit with the children. “They were so excited because the science was presented in a new and creative way that they hadn’t seen before,” he said. “They still talk about it.”

In a separate video about his work, Cuturic said that education provides stability and structure that children need to cope with loss and stress, and it reduces the chance that young people will get involved in illegal activities, be sexually exploited, or be forced into early marriage.

When Halaseh described the teenage refugees he met last summer, though, they didn’t sound like future terrorist recruits. Unlike the younger children, they had known urban buildings before they’d been forced to flee. After they completed the toothpick and marshmallow design challenge, they said, “We want to create our ideal city,” and proceeded to construct a hospital, school, homes, and a garden. “They even used bits of marshmallow and toothpicks to create tiny flowers,” Halaseh said.