How to Make Voting Fair 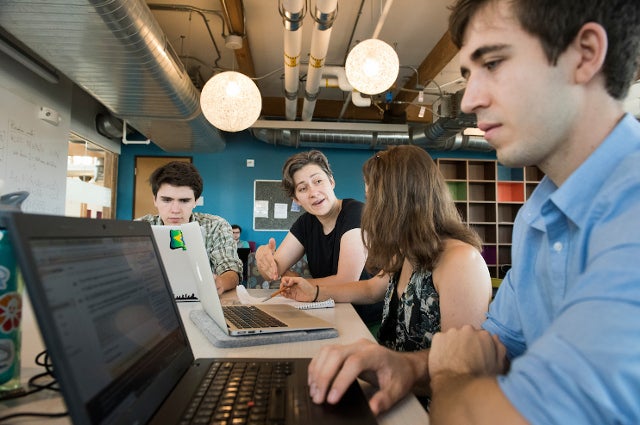 Every time voting districts are redrawn—be it by state legislatures, judges, or commissions—the people with the pens make decisions that carry enormous potential consequences. They can intentionally bundle similar groups of people together so that they make up a concentrated super-majority in a given district. Or, they can disperse populations among several districts so that they fall just short of critical mass to win elections.

Gerrymandering, as it is known, can skew a district toward red or blue, dampen or amplify the voice of minority voters, or throw more support behind a challenger or incumbent. But districts can also be drawn by a range of experts, including mathematicians and computer scientists, in ways that are more fair and informed.

This summer, fifty-two students from forty colleges and universities gathered in Boston to try to do just that: make redistricting—and the elections it affects—fairer. As part of a summer program called the Voting Rights Data Institute, the students spent six weeks plugged into the research of the Metric Geometry and Gerrymandering Group (MGGG), a team of Boston-based mathematicians and computer scientists working on the problems of redistricting.

The institute—a collaboration between Tufts and MIT with the tagline “data for democracy and civil rights”—trained students to apply geometry, information theory, discrete mathematics, statistics, data science, and computing to the redistricting problem. They hope to come up with a set of analytical techniques that can be put to use in the round of redistricting that will follow the 2020 United States Census.

The institute is led by MGGG founder Moon Duchin, an associate professor of mathematics at Tufts and a senior fellow at the Jonathan M. Tisch College of Civic Life; Justin Solomon, an assistant professor who leads the Geometric Data Processing Group in the Computer Science and Artificial Intelligence Lab at MIT; MGGG’s post-doctoral fellow Daryl DeFord; and program manager Aidan Kestigian.

Recognizing that deep research on redistricting requires collaboration across disciplines, the institute sought applicants with backgrounds in math, political science, programming, statistics, law, and related fields. The students—from Tufts, Harvard, Columbia, Penn State, Wellesley, New Mexico State, and the University of Bristol in the U.K., just to name a few—worked in small groups on a variety of projects with practical applications.

A main thrust was researching the redistricting laws and practices of all fifty states plus Puerto Rico and the District of Columbia. “States have a lot of authority in how they redistrict,” said Kestigian, the MGGG and Tisch College program manager. States differ, for example, in how they allow jurisdictions or municipalities, such as cities or counties, to be split between two or more districts during redistricting. “The students thought about how that process should work in a mathematically precise way,” she said.

One group looked at the ramifications of a proposed U.S. census question—new for 2020—that would ask people about their citizenship. If such a question discourages immigrants from taking the census, it could throw off a state’s population totals. That could affect the number of electoral votes a state has in the presidential election, as well as allocations for government programs such as the Supplemental Nutrition Assistance Program, also known as food stamps.

A major project that will continue into the future is the implementation of an algorithm, called “Markov chain Monte Carlo,” for randomly sampling districting plans by computer. The students wrote more than 10,000 lines of code, creating the capacity to study all fifty states by generating billions of plausible districting plans in each state. Using these random plans as a baseline, it becomes possible to identify whether a particular plan is very extreme, flagging it as a likely gerrymander.

Another group worked on developing an app, named Districtr, which lets users create new districting plans for cities and states, keeping communities intact while balancing other districting priorities. The students focused on making the app easy to use, to enable “civic engagement for citizens at all levels of technological expertise.” One possible future plan is to collect the maps people make in the app into a database of possible redistricting plans.

Other students logged results from previous elections and used maps—often paper ones—to collect boundary information about individual precincts, information that isn’t as readily accessible as you may think.

“Part of what motivated this group is not just developing new tools but also creating data sets that can be used by other people who are interested in redistricting data questions,” Kestigian said. They produced worksheets and repositories for sharing graphs, data, and models openly.

The students worked with mentors from academia and industry and heard from guest speakers, including Iván Espinoza-Madrigal, executive director of the Lawyers’ Committee for Civil Rights and Economic Justice; Tufts political scientist Eitan Hersh; and Nestor Guillen, an assistant professor of mathematics at the University of Massachusetts, Amherst.

After six weeks of rigorous work, the students still approached their projects with excitement, Kestigian said. “They are the ones creating the knowledge,” she said. “They are really in the driver’s seat.”

In addition to the research findings they leave for MGGG, the students will take away new skills and tools they can use for civic engagement in their home states.

“We hope that part of what we’re doing is creating a community of young people—graduate and undergraduate scholars—who will continue to work on these things as they continue on in their academic careers and their civic lives,” Kestigian said.