Tags: School of Arts and Sciences , School of Medicine
Share 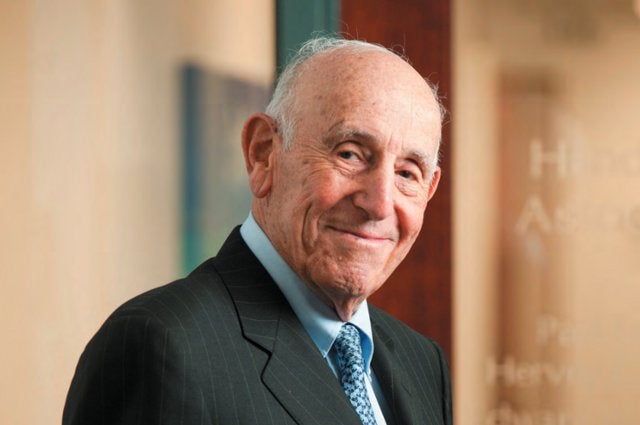 Edward Nalebuff, A49, M53, a pioneer in hand surgery and clinical professor emeritus at the Tufts School of Medicine, died on July 8 in Sarasota, Florida. He was eighty-nine.

Nalebuff was born in Newark, New Jersey, thirty minutes ahead of his identical twin brother, Donald. The twins grew up in the largely immigrant community of Bloomfield, New Jersey. They played varsity basketball together, taking the forward and left center positions, and confusing many opposing teams.

They went to Tufts, where they were roommates. They doubled up in other ways as well. Donald, who was on the varsity track team at Tufts, substituted for Edward in the intramural discus competition and won it. And Edward substituted for Donald in taking the mandatory 25-yard swim test for entering freshmen. That didn’t work out quite as well. Edward, who was not a great swimmer, got a B for himself but only a D for his twin. When asked why he had earned such a low grade, he explained that he was exhausted on the second go round.

After graduating from Tufts School of Medicine, Nalebuff interned at Grace-New Haven Hospital, then joined the Air Force, where he asked to work in orthopedics. The Air Force assigned him to Biloxi, Mississippi to do obstetrics, where he delivered 430 babies.

After his military service, he came to Boston in 1956 to start his residency in orthopedic surgery at Tufts, Boston City Hospital, Peter Bent Brigham Hospital, Children’s Hospital, and the Boston VA Hospital.

He came to town with a list of three women to meet. Marcia Silver was the first. Although she had sworn off blind dates, she relented based on his offer of two tickets to Arthur Miller’s A View from the Bridge at Wellesley’s outdoor summer theater in early July 1956. That Thanksgiving, Edward proposed. As Marcia explained, there were two conditions, one of which was based on Edward’s experience treating sports injuries. “He said he’d marry me if I agreed to give up skiing and other men. I said I‘d give up skiing.” They were together for sixty-two years and a day after that first date.

After a three-year residency at Tufts, Nalebuff started an orthopedic practice in Belmont and Boston. At what was then the Peter Bent Brigham Hospital, he saw hundreds of patients with crippling rheumatoid arthritis.

“I was told it was possible to make hands look better, but there was no way to make them work better,” he said later. “But I didn’t believe that.” At age 38, he took a big risk and decided to restart his medical career as a hand surgeon. At the time, hand surgery was less developed in the United States, so after he completed his orthopedic residency at Harvard, he undertook hand fellowships with the renowned Claude Verdan in Switzerland and Guy Pulvertaft in England. When he returned, he was the first to specialize in hand surgery in Boston.

As the leading hand surgeon in Boston, he saw many of the town’s prominent residents, though he was often oblivious to their fame. When asked by one patient if he would be able to continue playing the violin, Nalebuff provided his standard reply: After I’m done, you’ll be able to play in Carnegie Hall. The patient, then concertmaster at the Boston Symphony Orchestra, replied that he had already done so. And he did so again, post-surgery.

Nalebuff was a surgeon, but didn’t push surgery. One of his favorite sayings was “There’s nothing you can’t make worse via surgery.” When Alan Dershowitz came to see him complaining of tingling in his hand, according to Dershowitz, Nalebuff provided a simple non-surgical cure: “Stop leaning on your elbows.”

Nalebuff practiced at Massachusetts General Hospital before becoming a clinical professor at Tufts School of Medicine and chief of hand surgery at the New England Baptist Hospital. There he trained many of the next generation of hand surgeons and welcomed them to practice in the Boston area, helping establish Boston as the leading center for hand surgery in the country.

“Nalebuff was widely considered a pioneer of hand surgery in New England, and served as an important mentor to generations of hand surgeons through the Tufts Combined Hand Surgery Fellowship,” said School of Medicine Dean Harris Berman. “In his day, he was considered one of the world’s experts on rheumatoid hand surgery. With his students and partners Lewis Millender, Paul Feldon, and Andrew Terrono, Dr. Nalebuff co-authored some of the seminal articles in hand surgery and the book chapter on the surgical treatment of the rheumatoid hand.”

“Those of us who stayed in Boston know that Ed never saw his practice threatened when we started seeing patients in the surrounding area; on the contrary he kvelled in our success,” said his colleague Bruce Leslie.

Nalebuff stopped operating when he was 72, but continued working as a consultant hand surgeon until he retired at age 85.

An active alumnus of the School of Medicine, Nalebuff founded the Tufts orthopedic alumni club known as the Arthur A. Thibodeau Group, in honor of his former professor.

He and his wife Marcia also established the Edward A. Nalebuff Scholarship Fund thirty years ago, and continued to help deserving students over the years.

“He was passionate about his profession as a doctor and about life,” said Berman.

The family of Edward Nalebuff requests that donations be made to the Edward A. Nalebuff Scholarship at Tufts University School of Medicine (136 Harrison Ave, Boston, MA 02111 or giving.tufts.edu/med) or to your favorite Democratic candidate for Congress.