Fred Ptucha, A65, led a group of Americans to the summit of Mount Damavand in Iran, all part of a cross-cultural friendship mission 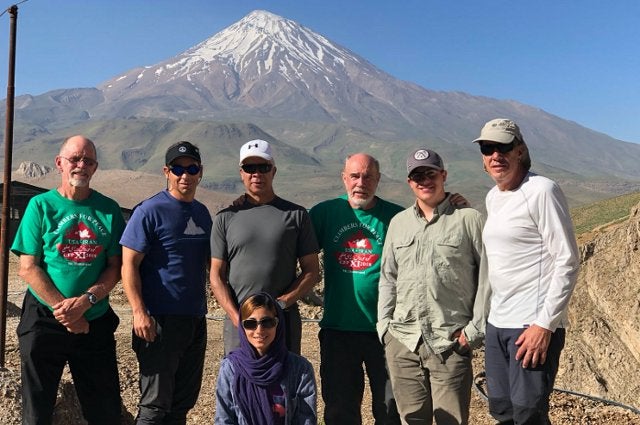 Fred Ptucha, A65, has summited many mountains around the world to promote peace. But his latest climb tested his commitment to international good will more than any before it.

“We’ve never had the countries so at odds,” Ptucha said, describing his July trip to climb Mount Damavand in Iran as tensions simmered between that country and the United States. “This whole thing came close to collapsing half a dozen times.”

When Ptucha started planning the trip in late 2015, the political mood was hopeful. The Iran nuclear deal had just been announced and the country seemed like the perfect destination for Ptucha’s group, Climbers for Peace, to advance its mission of cross-cultural friendship and cooperation.

Ptucha co-founded Climbers for Peace in 1997, putting together an international group to summit Mount Elbrus in Russia. He thought it would be a one-time event, but the camaraderie was so great that he invited some Ukrainian participants to climb Mount Shasta in California the next year. Climbers for Peace has now organized nearly a dozen expeditions.

Ptucha, a retired financial advisor based in Santa Rosa, California, served as a Navy lieutenant during four tours of duty in Vietnam, for which he was awarded the Bronze Star. He said his activism is partly fueled by guilt over not having the courage to speak out during that war.

The idea to go to Iran came to him and some friends while they were hiking in the Alps. They set their sights on Mount Damavand, which holds a special place in Persian literature and is the highest volcanic mountain in Asia at 18,406 feet.

Just getting there was a challenge. The U.S. State Department warns American travelers not to go to Iran because of the “very high risk” of arbitrary arrest and detention. “It was tough to recruit people,” Ptucha said. Even after the group had received an official invitation from the president of an Iranian mountaineering federation, who also offered a subsidy of $600 per climber as a gesture of encouragement, two would-be participants from the United States were denied visas by Iran.

Then President Trump announced in May that the United States would withdraw from the Iran nuclear accord, which lifted economic sanctions in exchange for Iran curtailing its nuclear program. Protesters hit the streets in Iran, and Ptucha considered canceling the trip.

But when he and five other American climbers arrived on July 1, they were warmly welcomed. Iranians approached them wherever they went, often asking to take photos with them and saying they loved Americans, Ptucha said. “They knew what Trump was doing, but they clearly differentiated between the American people and our government.”

Only four of the six men were able to summit Mount Damavand—one was sidelined by illness and another by altitude sickness. But Ptucha, the oldest in the group at seventy-five, made it to the top, where he met climbers from Turkey, the United Kingdom, Germany, Spain, and Greece. “It was like a UN meeting,” he said.

After the climb, he and the other Americans engaged in informal citizen diplomacy, talking with at least one hundred Iranians they encountered during a week of touring cultural and historical sites.

One day, a career military man in his late fifties saw Ptucha wearing his expedition T-shirt (with the words “May Peace Prevail on Earth” across the back and the silhouette of Mount Damavand on the front) and approached him in a park. They exchanged stories of losing friends in battle—the Iranian in his country’s eight-year war with Iraq, Ptucha in Vietnam—then Ptucha took the Veterans for Peace pin off his own hat and pinned it to the man’s lapel. “He teared up and we embraced,” Ptucha said, his own voice catching.

Moments like that—and the ability to share them with Americans who know little about Iran—made the trip worthwhile, Ptucha said. To continue the cross-cultural exchange, he has invited Iranians to the United States to participate in a 2019 mountain climbing expedition and in Veterans for Peace conferences. Unfortunately, he said, they may not be able to come because of the Trump administration’s ban on travel from several predominantly Muslim countries, including Iran.

Still, Ptucha hoped that the trip would in a small way help make another war in the Middle East less likely. While admitting that citizen diplomacy efforts might seem insignificant, he said, “I believe it is better to light candles of peace than to curse the darkness.”