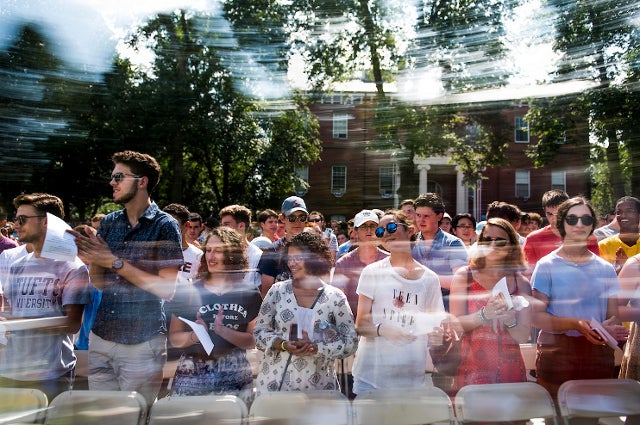 Resumes and transcripts can make a powerful impression when it comes to college admissions. But they don’t tell the whole story.

“They are not really why we chose you,” Tufts President Anthony P. Monaco told the incoming Class of 2022. “We chose each of you because we saw in the curious minds, compassionate hearts, and commitment to action that we prize in our students and alumni—we saw the qualities that bring life into this campus and light into this world. That’s why you’re here.”

Those encouraging words were among many shared with new Jumbos—1,200 in the School of Arts Sciences, 249 in the School of Engineering, and 95 in the School of the Museum of Fine Arts at Tufts—as they gathered with their families on the Academic Quad for matriculation on August 29.

With record temperatures in the high nineties, the new Tufts parents gathered for the event gravitated to folding chairs in the shade. The program included an a cappella performance of Abba’s “Dancing Queen” by the student group SQ, and so rousing was their rendition that the new Jumbos spontaneously jumped up and danced in place. 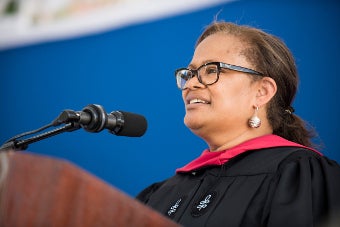 The members of the Class of 2022 are “not afraid to try new things,” said Karen Richardson. Photo: Alonso Nichols
It was a joyful and perhaps not surprising move for a class that Karen Richardson, dean of admissions and enrollment management, noted “is not afraid to try new things.” The incoming class, she pointed out, includes students who founded an organization to empower young girls interested in STEM fields, co-founded a cattle ranch in Patagonia, and competed in a canoe and kayak world championship.

“We’ve done our part in assembling a community of artists, scientists, philosophers, and engineers,” said Richardson. “Now it’s your turn to . . . form strong bonds, learn from and teach one another to make this college journey a transformational one for yourself and your classmates.”

Watch a 360 video of move-in day at Harleston Hall. Drag the cursor on the screen to get a changing view. Video: Steffan Hacker

Monaco urged students to embrace the full scope of the Tufts experience as well.  “You are on the threshold of an amazing journey, one that will help you to develop intellectually, socially and personally, just as it has done for so many Jumbos before you,” he said. “You are following in the footsteps of accomplished Tufts students. They have left their mark on the world, but first Tufts made its mark on them, and now it’s your turn. . . . Whether you believe it or not,    you are ready for this challenge. How do I know? Because we chose you, and we didn’t make a mistake!”

By the numbers, the undergraduate class is one for the record books. Tufts received a record 21,501 applications and ultimately admitted 3,143, or 14.6 percent, the second-lowest acceptance rate in university history. Also, just under half of the students in the School of Engineering—49 percent—are women, “a statistic that makes us especially proud,” said Monaco.

Other distinguishing factors of the class include:

202 students are the first generation in their families to pursue a bachelor’s degree, nearly 40 more than last year’s 163.

In the U.S., Massachusetts, New York, and California sent the largest number of students.

Thirty-four students are from the university’s host communities of Medford, Somerville, and Boston, a 70 percent increase over last year.

The undergraduate class received $25.8 million in need-based grants, a new mark for financial aid commitment by the university, up nearly 18 percent over last year. The amount of the average grant this year was $47,513.

This year, twenty students enrolled in Tufts’ 1+4 Fellowship program, the Jonathan M. Tisch College of Civic Life’s bridge-year initiative that provides accepted students the opportunity to experience a “gap year” of full-time community service before beginning their studies at Tufts. Seventeen of the students are serving their fellowships in Brazil, Ecuador, and India, while three are serving their fellowships in the United States.

Ninety-five students enrolled in the School of the Museum of Fine Arts at Tufts (SMFA), 53 of whom will pursue dual B.F.A. and B.A./B.S. degrees.

Thirty-one individuals in the class are National Merit Scholars.

Welcoming the Class of 2023

A First Look at the Undergraduate Class of 2024

An Early Look at the Undergraduate Class of 2026