A Thousand Coats of Paint

The Tufts cannon, a canvas for student groups for more than two decades, gets a fresh look

Sara Mitchell, A21, sensed the many-layered meaning of the Tufts cannon even as a prospective student. The iconic landmark doubles as a popular billboard for undergraduates emboldened by spray paint to make a splashy, public shout-out—be it a club announcement or happy birthday to a bestie.

“I remember seeing it even from afar on the campus tour,” said Mitchell, “and I could just feel the enthusiasm and passion of students pouring out through the layered paint. To me it was so much more than an object to paint. It was a canvas on which students could create fantastic memories.”

Those memories are often hard won. Students paint the cannon by dark of night, and their masterpieces are guarded diligently from rival groups hovering nearby awaiting opportunities to leave their own mark. Mitchell recalls how that nocturnal vigil played out last year on the eve of NCAA Division III regionals for men’s and women’s cross country. She and other Jumbos spray painted the cannon, and then prepared for the “inevitable standoff,” she said. 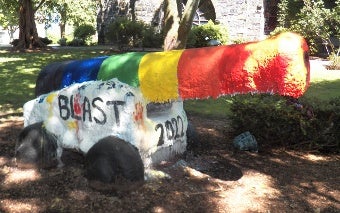 The cannon earlier this summer. Photo: Laura Ferguson
“We organized guarding shifts in an Excel spreadsheet, and divvied up blankets, sleeping bags, snacks, hot cocoa, and munchkins,” she said. “Several groups tried to either bribe or non-maliciously attack us, but we fended them off. You might think painting the cannon is easy, but nothing about the cannon is that simple.”

Indeed, there are now lots of other people who can say that also applies to getting the that paint off.

This summer, nearly three inches of paint layers dating back to the Clinton Administration, it seemed, were slowly—very slowly—removed, and the nearly 6,000-pound cannon was restored to its original condition. The six-week-plus job called for circular saws, demolition hammers, and air chisels to dig through nearly a thousand layers of paint. Even then, that rough work wasn’t enough to get ever last trace removed. That required a road trip for the final assault: an off-site high-powered sand blasting.

The result: a pristine cannon with a slimmer ten-foot barrel, well-defined wheels and bolts—previously so paint-obliterated as to resemble inflated donuts—all now resting solidly to a new wood foundation. Two plaques, one from the Medford Historical Society and one from the Class of 1957, were found buried by paint under the cannon, will also be restored and repositioned.

“It’s a far cry from what it had become,” said Ken Person, director of building operations, as the cannon was lowered onto a new base and foundation on August 31.

“It actually looks like a cannon now. I’m not sure how long it will stay this way, but it looks great.”

Somerville resident Vicki Macrokanis, out for her morning walk with her husband, spoke for many observers who paused to observe the hefty cannon being lowered into its hilltop perch between two of the university’s oldest buildings, Goddard Chapel and Ballou Hall.

“This a historic moment,” she said, adding how she’s always enjoyed being surprised by the cannon’s colorful painting schemes and uninhibited messages over the decades. “It looks brand new; it’s really something to see. It’s just lovely—like you are seeing its essence.” 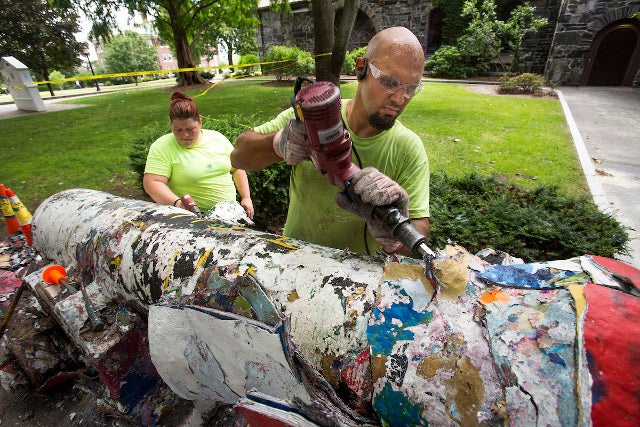 Person thinks the cannon was last stripped twenty-two years ago. “It really needed a cleaning,” he said. “It just had paint on top of paint. It was time—and we had some concerns about the stability of the base. I’m glad we did it, and besides, we have to take care of our Tufts traditions.”

Jeff Nordin, who runs a painting company and knows all about scraping away accumulated paint, said he initially thought the cannon would be a straightforward sandblasting job. But it turned out that the coating of latex paint blanketing the ten-foot barrel had become “like rubber. Our blasting tools just bounced right off it.”

So Nordin and his crew resorted to hand tools. Circular saws cut through the paint, followed by demolition hammers and air chisels. Slowly the crew began chopping and hacking off hunks of paint, all revealing hundreds of multicolored layers the way an architectural dig can peel back layers of human habitation.

The work started in early July and continued over six long weeks, including a wilting heat wave. “The weather didn’t help,” said Nordin. Nor did the nest of yellowjackets they found inside one of the cannon’s hollow wheels, which required a call to pest control. 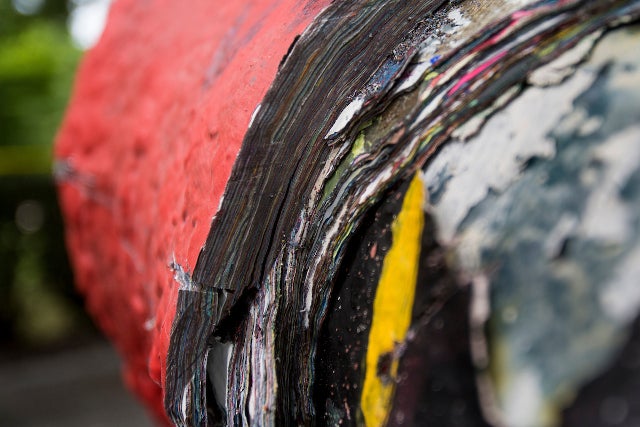 Layers of paint on the cannon. Photo: Alonso Nichols
Nordin estimates some 1,000 coats of paint were removed. “We figure we took off about 2,000 pounds of paint,” he said. Put another way: he and his crew filled a 12-foot box truck three times over with old paint.

“It was just so big and heavy,” he said. “We had to strip away paint that was encrusted around the axles and the bolts and their threads, because we wanted to salvage them—and that took hours and hours. But I wanted to keep as much of the original cannon as possible.”

Several “good-sized chunks” in fact ended up on the desk of Laura C. McDonald, art collections registrar. Nordin’s team was doing some painting work in the Tufts art galleries, and when McDonald heard about the cannon project, she and colleagues trekked to the Hill, excited by rare chance to see paint freed from form or substrate.

“We’re object people—we love objects—and we were amazed that, through the simple act of repeatedly painting an object over and over, the paint had become an object, with a top and bottom and cross-sections and colors,” she said. “It was something you just wanted to look at and hold.” 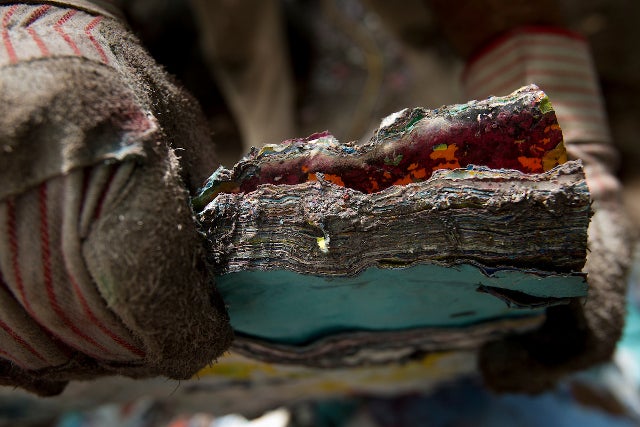 A piece of art, and a piece of history. Photo: Alonso Nichols
She and her colleagues were struck as well by paint as metaphor. “We marveled at the layers of history that the paint represented,” McDonald said, just like a tree trunk is encoded in growth rings. “We agreed we should bring some back to the gallery for posterity, and Jeff brought me a few pieces the next day. They are actually quite compelling and beautiful.”

To thoroughly strip the cannon down to bare metal, Tufts needed to sandblast the surface. Stepping up to help move the cannon was Your Space, a frequent landscaper for Tufts. They loaded the cannon onto a construction truck and delivered it a Rehoboth, Massachusetts, company, Mass Green Blast, where it was sandblasted and then primed.

According to Tufts Digital Collections and Archives, the cannon is a replica of a cannon taken from the deck of the USS Constitution, or  Old Ironsides, the 1797 frigate that’s now a museum in neighboring Charlestown Naval Yard. According to archival records, the city of Medford and the Medford Historical Society gave it to Tufts in 1956.

The university displayed it until the mid-1960s, when it was removed for repairs and not put back on display due to anti-military feeling on campus. It remained in storage until 1977, when a group of alumni led a movement to have it returned to its original spot.

Historic records suggest that the tradition of painting the cannon began with a tiff. During the fall semester of 1977, the cannon was painted as a protest to the visit and conferral of an honorary degree on Imelda Marcos of the Philippines, but it was quickly repainted by a student who objected to its defacing. 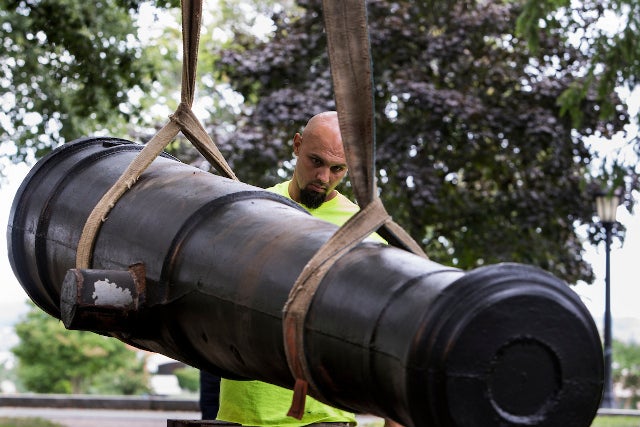 Workers get the cannon ready for placement back in its rightful place. Photo: Anna Miller
As for the cannon’s future, it will surely include more painting. And while that might seem a shame to some, it also seems like its destiny, if you ask cannon fans like Ethan Danahy, E00, G02, G07, research assistant professor at the School of Engineering.

When he and his wife were getting married in Goddard Chapel he incorporated the Tufts landmark into their wedding. “The cannon became a meeting spot, a focal point, and a wonderful part of our day,” he said.

“It's so great to see the cannon return to its historic spot, once again waiting for new coats of paint and allowing our students to have a literal canvas on campus to express themselves, show their passions, and celebrate all those characteristics of Tufts that make it such a great community,” he said.