In a new pre-orientation program for incoming students, the focus was on the arts 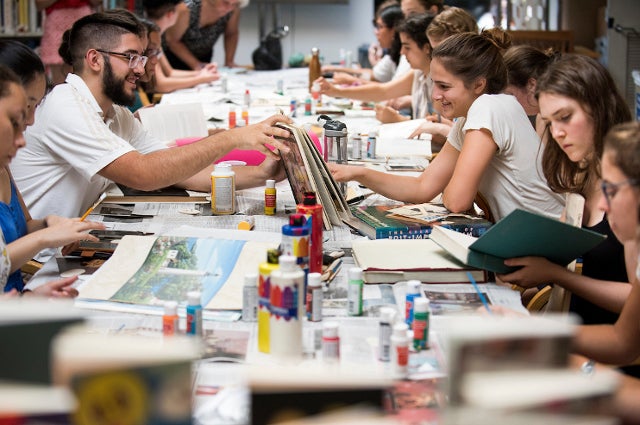 If there was an unexpected flair to how Tyler Whitaker translated the word “Tufts” onto a piece of pocket-shaped paper, it was entirely fitting. After all, he’d just spent three days in the Arts@Tufts pre-orientation program for incoming first-year students and transfers during the last week of August.

In a style reminiscent of Art Nouveau, those five stalwart letters shape-shifted into an ornamented illustration, with sinuous flowing curves. “It is unusual,” said Whitaker. “But I think this is an unusual and quirky crew. I wanted to try to reflect that we’ve all been very flexible and willing to try a lot of fun new things.”

That was welcome feedback for Maria Fong, a B.F.A. student at the School of the Museum of Fine Arts at Tufts who is co-coordinator of Arts@Tufts. She developed the new program from scratch with fellow SMFA student Badger Antoniou.

Over four activity-packed days, the two coordinators and five volunteer SMFA student leaders guided some thirty incoming students in art-making. The new students explored virtual reality, sound design, pin-making, and how to make vacuum-formed masks at SMFA studios, and created zines—miniature magazines—at the Crafts Center in Lewis Hall on the Medford/Somerville campus. Field trips to Boston’s SoWa open market, the Boston Center for the Arts, and the Museum of Fine Arts introduced students to the city’s thriving art scene.

To cap off the program, the students’ work is now an art show in Tisch Library, up through September 20 in the Tower Café Art Gallery. That show was the focus on the last day of the program, in a workshop focused on marketing. Some students made posters using a risograph printer, known for its ability to output edgy, bitmapped images. Others designed small buttons. 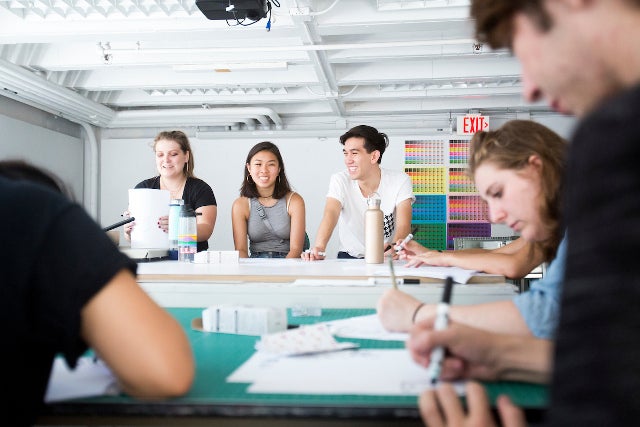 Kylie Jost-Price, Emily Lew, and Tyler Whitaker work on drawings for a risograph that they and their classmates will make. Photo: Alonso Nichols
“We wanted students to focus on experimentation and trying out new things, because that is what college is and that is in the spirit of SMFA, trying out any discipline you want—even if you haven’t done it before,” said Fong. “It’s about being open to an accident, rather than caring only about the end project.”

The mask-making project was the perfect example of that. At the SMFA’s Mission Hill fabrication studio, students transformed plain paper masks with cardboard, clay, and recycled materials like bottle caps to add texture and shapes. These sculpted objects, when placed on a vacuum form table, then had a hot plastic sheet molded over them. The students then painted on this new surface, creating the final masks.

Arts@Tufts joined a burgeoning number of pre-orientation programs held just before the start of academic year, and while optional, more than half of the incoming class participated in some kind of “pre-o” program. The programs break the ice by bringing together students in small groups around shared interests, encouraging friendships and cultivating meaningful connections.

Laura DaRos, assistant dean for SMFA, said the idea for an arts-focused pre-o program came about last winter, “because so many students are interested in the arts at Tufts.” The SMFA, based in Boston, seemed the best place to start what she hopes will evolve into additional tracks in performance, music, and theater pre-orientation. 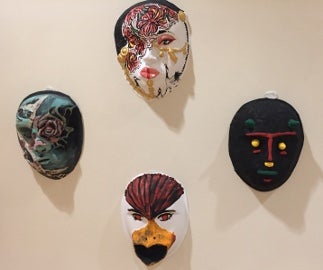 Just a few of the masks at the Tisch Library exhibition of works by Arts@Tufts pre-orientation program students. Photo: Taylor McNeil
Tufts acquired the SMFA in 2016; it’s now part of the School of Arts and Sciences. Administrators want to be sure all undergraduates, most of whom study on the Medford/Somerville campus, see how easy it is to get to the Boston campus, where they can take full advantage of studio courses such as welding, metallurgy, and printmaking.

DaRos said she was pleased that the program attracted a broad range of students. “We didn’t want it to be for just B.F.A. and combined degree [B.A./B.S. and B.F.A.] students,” she said. “We wanted it to be for engineers and liberal arts students, too—we want all students to discover how easily they can be involved in the arts at Tufts.”

Sophia Clason, A22, said Arts@Tufts “definitely helped smooth out my transition to college.” Coming to Boston from Chicago, and with plans to pursue the combined degree program, she valued the creative preview that also demystified logistics.

“It was really fantastic to see my future facilities at the SMFA, to be able to travel by T between the two campuses, and to meet upperclassmen who are also in the combined degree program and ask them for lots and lots of advice,” said Clason. “It worked as an icebreaker, too. I made good friends with people I’m not sure I would have run into on campus otherwise.”

Art-making at this stage is not about expertise, but about the creative process—the uncharted journey of trial-and-error, surprise, and delight. That creativity was flourishing at another workshop, in a sun-drenched room where students made buttons, their final contribution to the show.

The work table was strewn with older art books and exhibition catalogs, topics ranging from Rembrandt to post-Impressionist to de Kooning, all pulled from collage lockers kept specifically to prime the creativity pump.

Clason was drawing inspiration from deliberate preparation of her background—gluing together a collage made up of tiny bits of blue paper. “I’m still figuring out what to put on it, so check back later,” she said.

Julian Wessell-Meadows, had already made a choice. His scissors were engaged in cutting out a small circle from a book on Rembrandt: the face of Rembrandt’s mother. It seems a daring choice, but then, the Dutch master wouldn’t mind—would he?