A longtime teacher at the SMFA, her paintings and photography were about looking for the unseen

Tags: School of the Museum of Fine Arts
Share 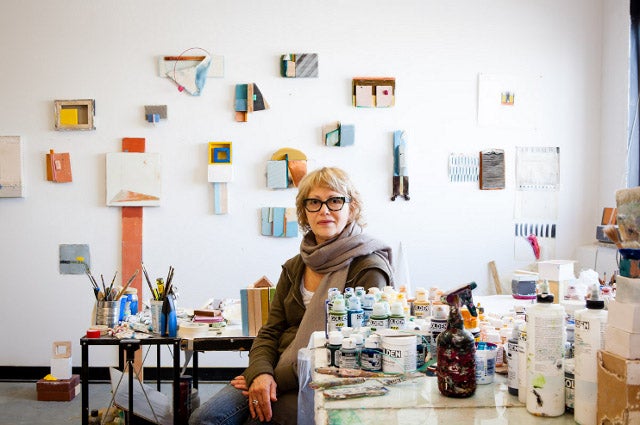 Traveling anywhere in a car with painter and photographer Julie Graham meant stopping “all the time, so she could leap out and take photographs,” recalled sculptor Mags Harries, her friend and colleague from the School of the Museum of Fine Arts at Tufts. “She loved color, layered surfaces, scavenged juxtapositions, vernacular architecture, the collision of architectural spaces. With Julie, it was always about looking for the unseen.”

Joel Janowitz, a Boston-based painter who taught at the SMFA from 1994 to 2000, observed that when working with her students, Graham was “encouraging, nurturing, thoughtful, articulate, knowledgeable, and caring—I think caring underlies it all,” he said. “She paid a lot of attention to teaching and wanted to do it well.”

These memories, among others, now contribute to a vivid legacy of the painter and photographer and long-time faculty member at the SMFA. Graham, who taught painting there for twenty-seven years, died on August 23 at age seventy-one. The cause was cancer.

Graham had described how her inspiration “often springs from ‘the other side of the tracks’—urban industrial areas, abandoned buildings, vernacular architecture, minimalist spaces, and clustered housing in foreign lands (big boxes in some cases, shanty towns, in others).”

At the SMFA, her course Material Meaning exemplified that search for new ways to give form and space meaning. She encouraged students to “see the surface of a painting as a material with many possible forms,” said Harries, a professor of the practice at the SMFA. “I think she aspired to sculpture. Her work was quite physical in nature. She could layer, she could build on.”

Patte Loper, an SMFA professor of the practice in painting, describes Graham’s work as “tactile, intuitive, generative, and preoccupied with themes of accumulation, loss, and absence. Her use of materials reflected her interest in the overlooked, finding value and meaning in what has been discarded or unremarked upon,” Loper said. “In this way, her work carried its own narrative arc—each of her pieces was developed over time, and allowed to show the history and material reality of their making. In this way, her work meditated in profound ways on the connection between painting, the material world, and the human body.”

“Julie left us at the height of her powers as a painter,” said Patte Loper. Photo: Kathy Chapman

Graham grew up in Elmira, New York, and earned degrees in fine art and art history at Hood College, spending her junior year abroad at the Sorbonne. She went on to earn an M.F.A. at Central School of Art and Design in London. Describing her influences in her artist’s statement, Graham wrote: “I embrace the pluralistic nature of contemporary painting, and as an abstract artist I am indebted to the traditions of Modernism, Arte Povera, Abstract Expressionism, Minimalism, and Supports/Surfaces. Mostly, I just paint.”

In 1991, she joined the SMFA as a member of the painting faculty. She and Harries also ran summer workshops in Venice, where “she navigated the streets like a local,” said Harries. Graham taught at institutions such Monserrat College of Art, the Rhode Island School of Design, and the University of Massachusetts, Boston, and was arts editor at the Harvard Review.

Janowitz said Graham and her husband, Rikk Larsen, became part of a beloved pilgrimage he organized every summer to Great Spruce Head Island in Maine. Surrounded by the island’s rugged beauty, Graham’s eye was drawn to the “textural richness” of spaces, stones, driftwood, and pine trees and to the large house overlooking Penobscot Bay.

“She was always looking at how things worked spatially,” Janowitz said. “Her work was less representational and more about how the world was organized—she was more interested in underlying form than what something looks like on the surface.”

Graham began exhibiting her work in the late 1970s and over the next four decades she achieved growing recognition, with work featured in both group and solo shows in Boston and New York galleries, as well as in California and Texas.

“Julie left us at the height of her powers as a painter,” said Loper. “Painting is a slow medium, and over the fifteen years that I was lucky enough to know her, I watched her work expand and deepen. She was working towards multiple exhibitions at the time of her death. It is a loss to the school, and to the discipline of painting.”

Graham’s way of looking also informed her photography. She recently had partnered on a book with Joanne Kauffman, now retired from MIT, where she was principal research scientist and deputy director of the Center for Environmental Initiatives and lecturer in political science.

Kauffman and Graham envisioned a portrait of the upper Var region of southern France, where Kauffman lives. Graham’s love for the place, and her sensitivity to vernacular architecture and its relationship to culture, said Kauffman, made her a perfect choice for chronicling the region’s shift from a traditional rural zone to a tourist economy.

“Julie’s images are fragments of stone walls, images of abandoned machinery, an empty pier that echoes the shape of a traditional Provençal farmhouse reaching out on to the emerald man-made lake, a tannery-turned-art gallery,” she said.

“She opened my eyes to seeing and exploring change and constancy in the landscape without judgment. I discovered through her lens that this was not just a tale about Provence but, ultimately, about our modern—some would say postmodern—world. As I look through Julie’s photographs now, I am struck by how her pictures of fragments of the past and present capture the sense of discomfort that we feel in the presence of radical change.”

The SMFA is planning a remembrance of Julie Graham’s life, together with a show of her work. The Friends Meeting House in Cambridge, Massachusetts will also hold a memorial for Graham on October 13 at noon.