Bringing a Painful Past to Life 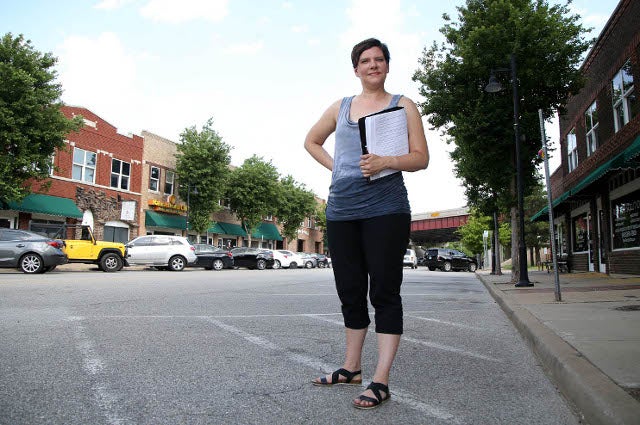 Tara Brooke Watkins, a Ph.D. candidate in theatre and performance studies in the Department of Theatre, Dance, and Performance believes theater has the power to bridge deep divides in society. It’s a conviction that led her to write a play about the Black Wall Street Massacre, which erupted in 1921 in Tulsa, Oklahoma, killing hundreds of African Americans and destroying their prosperous neighborhood. Her play based on that tragedy, Tulsa ’21: Black Wall Street, premiered in Tulsa this summer.

The play blends survivor stories from archival records with those told by African-Americans living and working in Tulsa today. Those current-day first-person experiences were shared in story circles that Watkins ran in Tulsa, bringing together residents in small groups to share personal stories. A native of Tulsa, Watkins had never heard of the massacre until she was in graduate school in Boston.

Watkins, a playwright and director, is an assistant professor in Eastern Nazarene College’s Theatre for Social Justice program. Her play The Bible Women’s Project was a selection of the New York International Fringe Festival in 2016.

Watkins, who is using the Tulsa massacre as part of her dissertation research on impact of theater in response to cultural trauma and untold histories, spoke with Tufts Now about her Black Wall Street journey, and how theater can begin to heal cultural trauma by giving voice to grief, rage, and hope.

Tufts Now: How did you get the idea for this play?

Tara Brooke Watkins: I was in graduate school at Emerson College when by chance I picked up a history book at a local bookstore. I was shocked I had never heard of the Black Wall Street Massacre. I grew up partly in north Tulsa and never heard a word about this event that resulted in the deaths of hundreds of African-Americans. I was even more surprised when everyone I reached out to in Tulsa said they’ve never heard of it either.

At the time I was working with Robbie McCauley at Emerson College on story circles and community engagement, so I brought it to her the next day. I told her I had read this book about my hometown and that it was really bothering me. I wanted to do something, but I didn’t know what. She said she grew up in Georgia and had heard about the massacre, but that it was hush-hush in Tulsa.

What did you hope to accomplish by making this tragedy into a play?

On its most basic level, I wanted people to know as much as they could about what really happened. Most Tulsans know nothing about it, and if they know something, they think of it as a riot. In the white community, the phrase I kept hearing was, “When are you guys going to move on? When are you going to let this go?” But there is no way we can let it go until the story has been heard.

I knew I could bring this history forward, in an accessible way, through theater. To me, as a theater artist, if you have that ability, it’s almost wrong to not go there. For anyone like me who feels called to social justice—this is just what you do. Theater can take on tough topics. Anna Deavere Smith says that until white people start doing race work, we’re never going to move forward.

Where did you start?

My first step was to do as much archival research as possible—I did that the first year. It was fascinating. The neighborhood was called Black Wall Street because it was the most affluent Black community in the country at that time, with about 16,000 people living and working there. There were two newspapers and two thriving theaters. 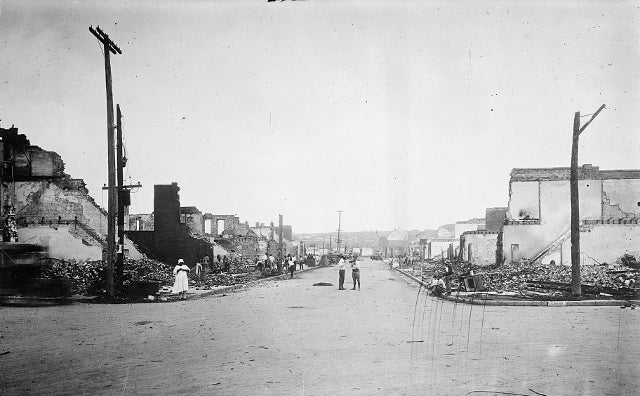 A street in north Tulsa after the destruction of the African-American community there in 1921. Photo: Library of Congress
I also focused on building relationships with the community, and began conducting story circles at Tulsa’s Greenwood Cultural Center, which were open to anyone who wished to attend, Black or white. Every week for three months I held story circles. It was important that I be in their community and also to symbolically say, it’s your voice that matters.

Why were the story circles a good fit with the play’s development?

Story circles create a safe space for dialogue; they are actually indigenous practices revived during the Civil Rights Movement when they were adapted by theater artists. There is something special about the format of the circle—it’s round, there is no beginning or end, and when it’s your turn you can pass—but you know you will be heard.

Most importantly, they give you an opportunity to share a personal experience, feeling, or thought that other people might find relevant and insightful. As an example, some of the questions I asked were: When has something been stolen from you and you came back stronger? When was a time you were treated poorly based on someone else’s prejudices? What is an event that defines what Tulsa is for you?

It must have been difficult, though, to even broach the topic after decades of silence.

I had great support during the story circle process the summer of 2017, but once the play was written and we had auditions and began the rehearsal process, everything was difficult leading up to performance. I had comments online, to my face, to my cast members from people in the Black community insinuating I did not have a right to tell this story since I was white. Black people said that they would not come to see it because it was not my story to tell, and white people said they wouldn’t come because I was digging up history that should remain in the past.

When I announced to my family that I was doing this project, my mother and grandmother were irate that I would do something that might make white people look bad. Later, they came to see the show and my grandmother was very emotional afterwards. She said, “I was really against this, but now I get it. I get why you had to do this.” And my mother said, “You know, I’ve never thought about what it must be like to be Black in this community. Theater really lets you see things from the other perspective.”

The cast was made up of twelve Tulsa African-American actors, who portray dozens of characters of all races. What led you to make that choice?

I knew from the beginning that I wanted the Black voice to be heard. Many times over the past century, phrases like “Well, we [white Tulsans] don’t really know if that’s true” have been uttered, even in official documents. These phrases are harmful on multiple levels, but at their heart, they negate the Black voice. In trauma studies, one of the first steps toward healing is validation of the trauma story. And a great way to validate is to listen without interruption. Theatre is a great format for this to happen.

I consulted with both Black and white people in Tulsa before finalizing my decision about the casting and making sure everyone was on board. People acknowledged it would be controversial, but as long as we had talkbacks at shows and could dialogue about it, it would be a powerful choice. At the show, Black people commented that they were glad I made that choice, and white people commented that it made them wonder if they themselves had ever said some of the phrases they heard. What might have seemed like harmless comments to them before now were shown to be quite the opposite.

The stage crew was made up of white people, so I believe the play symbolically shows unity and that some white people do get it and do care. I also believe that it would have been wrong as a white person who said she was there to listen and heard stories of the damage done by white people to not hold white people accountable for their actions. This was the way I tangibly engaged with the symbolism of my whiteness in this project.

Were you uncomfortable at all as a white person writing a Black story? What was the reception from the Black community?

I believe I have the ability to listen well, and while it might appear to outsiders that I was probably uncomfortable writing this play, since I was telling the Black story, I actually did not think personally in terms of race. That is not to say I was not honest with myself about the appearances of the racial difference in such a racially tense story and city, but to me, I was listening to human stories. It did not matter what race they were. My only job was to listen and pass along what they said—in a theatrical, public way.

Ultimately, though, this was a white story, too. White people did the killing. I hoped it would be healing to have a white person humble herself enough to hear the stories of anger and pain. It is not enough to have Black people say to other Black people what they already know. It must be said to white people because, after all, they are the ones doing the oppressing without questioning what their actions are doing.

Even when some people in the Black community were upset with me for thinking I could share the story, I understood that my color was a symbol of oppression for them. I don’t blame them for questioning me. I knew it was the symbolism of my color that they were responding to.

I knew what I had written was their story, and I rested on that knowledge during difficult moments. I believed that if they would take the risk to see it, they would hear their own stories being portrayed. And many of them did see it and publicly shared that although I was white and they had apprehensions, I had indeed been true to their stories.

I think the benefit, as sad as it is in retrospect, to my being white was that it got white people to come see the play. As much as I wish white people in Tulsa would venture to see Black theater or that Tulsa Black artists got as much publicity as white artists, the real struggle I had there was getting the attention away from me and onto the story, actors, and North Tulsa community.

What’s next for the play?

The state senate and the Tulsa City Council recently had consensus from both sides of the aisle that the massacre should be taught in the public schools, and this past summer the state board of education had a week-long teacher institute on how to teach this material because, of course, no one has really been teaching it. I also wrote an abridged version that could be presented in schools, and worked with a team of women of color at the Greenwood Cultural Center who are interested in directing it, training them this summer.

Tara Brooke Watkins’ play, Tulsa ’21: Black Wall Street, will be performed in June 2019 in Boston by the Pariah Theatre Company.