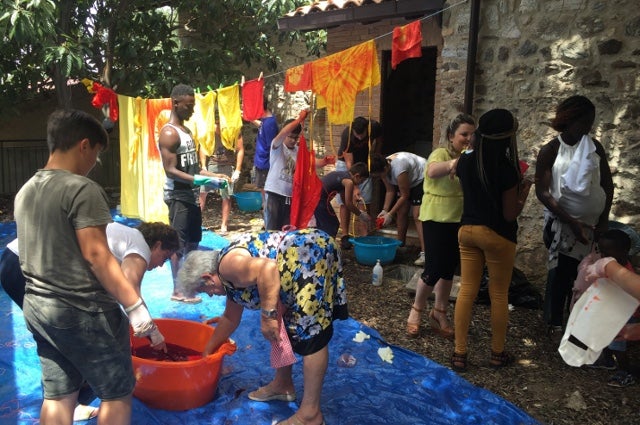 Photographer Jeannie Simms has spent the past two summers in Sant’Alessio, a village in the foothills of the Aspromonte mountains in Reggio Calabria, at the far southern tip of Italy, a focal point for the refugee crisis in Europe.

But instead of trying to isolate and push away refugees coming from Africa and the Middle East, Sant’Alessio has become an uplifting model of assimilation. Village mayor Stefano Ioli Calabrò in 2014 began welcoming immigrants, with support from Italy’s SPRAR network—a reception system for asylum seekers and refugees that provided humanitarian assistance for immigrants—bringing resources to newcomers and to the village, whose population had dwindled to several hundred people.

It was here that Simms, a professor of the practice at the School for the Museum of Fine Arts at Tufts, started collaborative art projects that brought together Italian natives and newcomers from countries ranging from Gambia and Mali to Syria and Afghanistan.

Her project that first summer, Under the Sun, was made up of cyanotypes, a printing process that uses sunlight for making blue-colored prints. “Metaphorically, the title links us all under one sun, emphasizing our shared humanity,” Martina Tanga, Koch Curatorial Fellow at the DeCordova Museum, wrote in a statement  for Simms’ solo show of the cyanotypes at Boston City Hall, on display through October 5. 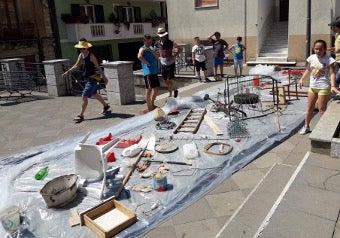 Townspeople in Sant’Alessio making cyanotypes with found objects. Photo: Jeannie Simms
The inventive process of making those cyanotypes is integral to that message. Tanga described how Italian-born residents and recent immigrants foraged abandoned buildings for objects that reminded them of the concept of home, objects they then arranged on large photosensitive cotton sheets. The results “are ghostly silhouettes of domestic objects that seem to float in a sea of blue, evoking the displacement endured by immigrants in transition.”

This past summer, returning thanks to a Tufts grant from the Faculty Research Awards Committee, Simms focused on another creative avenue: textiles, language and communication. She organized and facilitated workshops led by batik artist Mola Modoulamin Drammeh and poet Karamo Barrow, both from Gambia, who had moved to Sant’Alessio. 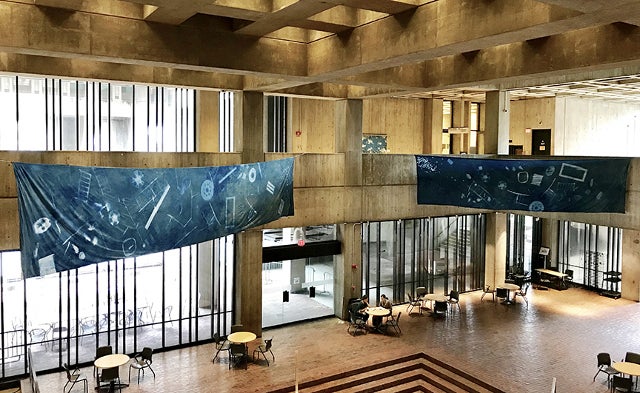 Cyanotypes on display at Boston City Hall. Photo: Jeannie Simms
That Simms sees unlimited potential for art to explore and illuminate important issues of our time is evident as well at the Boston Center for the Arts, where she curated Resistant Currents, a show exploring “language, labor, citizenship and migration.”

She recently spoke with Tufts Now about her experiences with recent immigrants in Italy and how art can bridge cultural differences.

Tufts Now: This past summer you went back to Sant’Alessio and worked with batik—why batik?

Jeannie Simms: When I learned last year that one of the new residents in the village, Mola Modoulamin Drammeh, was a batik artist, I immediately knew I wanted to come back and see if I could work with him and help him teach the craft to people in the village. His mother supports herself back in Gambia making batik, and they both carry on a long tradition of handcrafted batik in West Africa.

The more I thought about fabric—especially beautifully hand-made fabric—the more I saw the connection between the power of objects and cultural exchange: the ways soccer towels, bed sheets, kitchen aprons, bags, and T-shirts could be transformed via batik into messages about Gambian culture and help everyone to get to know each other.

How did the batik project work out?

There are not many opportunities for villagers and immigrants to be together in a shared activity. Having people hang out and spending time together over several hours and learning about the skills and culture of new residents, was great to see—it really is what I wanted to emphasize. 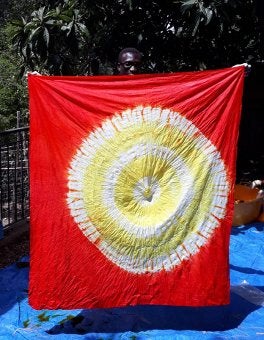 Karamo Barrow holds up one of his batik creations. Photo: Courtesy of Jeannie Simms
There is a lot of emphasis in European countries on teaching European culture to the recent immigrants, to help people assimilate. One of my goals was to help facilitate cultural exchange and “teaching back” the cultures of the new arrivals from countries in Africa and the Middle East. By the time we left, the mayor wanted Drammeh and Barrow to start a business in the village. While there are many people from North African countries in southern Italy, there is not a presence of handmade batik for sale.

Did your ideas about art and its collaborative potential change after doing this project?

It made me realize the power of objects—what objects can hold, in terms of exchanges between people. During the workshops people made various kinds of objects, and later I saw them wearing some of the T-shirts and clothes. One day I saw three kids running around wearing batik shirts. So the visual presence and the circulation of those objects in the village are a different form of integration. People who might not have had much opportunity to really talk with their new neighbors can learn something about another culture through making something material in a shared experience that they can keep as their own.

It’s not only a visual connection. Karamo, a poet, gave a workshop on proverbs and euphemisms, which I thought was very smart, because most cultures tend to have related proverbs. He would say in Gambia they have this proverb—“the shadow of the palm is not far from the tree”—and an Italian would be familiar with saying “the apple doesn’t fall far from the tree.” I think people got to see a body of knowledge within their diverse community that they hadn’t seen before.

It seems that what you observed was that art and simple creativity in general have the power to transcend cultural differences. 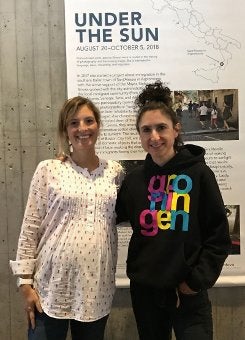 Martina Tanga, Koch Curatorial Fellow at the DeCordova Museum, left, and Jeannie Simms at Boston City Hall
There is something about the open borders of what art is that makes it a place where people are willing to spend time and work in a speculative way. They’re willing to look at and make art because it’s open ended. It doesn’t have to have a goal in mind.

Why do this kind of international project? What’s the connection to your sense of what it means to be a photographer and a teacher?

Part of my practice as a photographer is also being an educator. I think my skill in photography is also really honing into what is of narrative interest. And as for looking at immigration—I believe it’s one of the most important issues of our time; to me it demands we all feel and respond with generosity. I believe artists have a kind of special capacity to reimagine political futures in ways that are highly interdisciplinary, sometimes impossible, sometimes evocative, and many times quite practical.

Jeannie Simms will present a lecture on “Under the Sun” at the Science, Technology and Society Lunch Seminar Series on Friday, November 9 at Sophia Gordon Hall on Talbot Avenue.