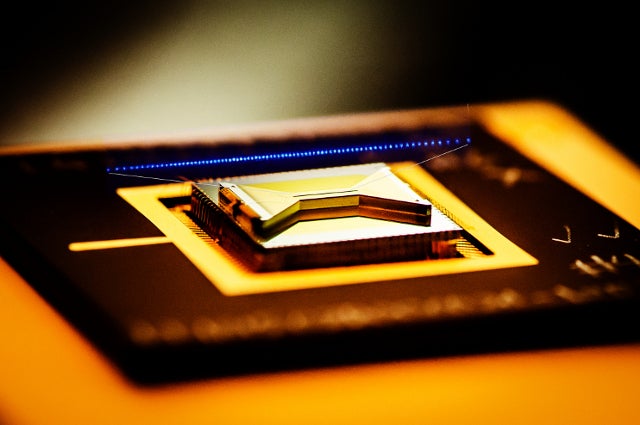 Today’s supercomputers have amazing capabilities, but there are many problems that they still do not have enough computing power to solve—from modeling complex molecular systems to breaking advanced cryptography systems.

Peter Love, an associate professor of physics, is part of a team led by Duke University that recently received a $15 million, five-year grant from the National Science Foundation (NSF) to develop a quantum computer and applications to run on it. Love will lead the applications part of the project, developing problems that the quantum computer could solve.

“Quantum computers will change everything about the technology we use and how we use it, and we are still taking the initial steps toward realizing this goal,” said NSF Director France Córdova in a statement. “Developing the first practical quantum computer would be a major milestone.”

Love, who came to Tufts in the fall of 2015 from a faculty position at Haverford College, talked recently with Tufts Now about the ground-breaking project and his role in it.

Tufts Now: Can you briefly describe how quantum computing differs from conventional computing? 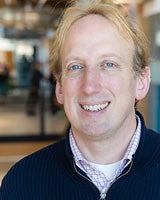 Peter Love
no matter how fast or sophisticated, is equivalent to a calculation performed by writing ones and zeroes on pieces of paper. Quantum computations obey the laws of atomic physics—quantum mechanics—rather than the classical Newtonian physics on which conventional computing is based.

Using trapped ions is the approach this team is using to generate qubits—can you explain how that works?

Trapped ion quantum computers use much of the same technology as atomic clocks. The quantum bits—qubits—of the computer are held in two of the energy levels of an ion [an atom with an electric charge]. Laser pulses are used to program and read out the qubits. Because the ions are charged, they can be trapped and moved around so pairs of ions can be made to interact with each other. These interactions realize quantum gates, the elementary operations of the quantum computer. We plan to trap more than fifty ions to create the largest ion trap computer constructed to date.

What is your role in the project?

The project has three parts: hardware, software and applications. I lead the applications part of the project. The goal of the applications work is to develop specific problems that this machine can address, which are as close to the classical state of the art as possible.

We will be focusing on problems of simulating other quantum systems, for example simulating the electronic state of molecules, which is of fundamental importance in chemistry. We will also be examining applications to optimization problems. Simulating a quantum computer with fifty to one hundred qubits is likely impossible with any existing classical supercomputer. The question for applications is: just because you cannot classically simulate the machine, does that imply you can use it to address some real problem that a classical computer cannot reach?

How did you get involved in quantum computing research?

I have been working on applications of quantum computers since 2002, when I moved to Tufts as a postdoc working with Professor Bruce Boghosian in the Department of Mathematics. I then worked in the applications group at D-Wave Systems before moving to Haverford College in 2006. Over the last decade and a half we have been working towards the goal that I hope we will realize with this project, of addressing large-scale scientific problems using a quantum computer.

Why is it that you as a physicist are writing applications for this quantum computer vs. a computer scientist?

Computer scientists do not learn quantum mechanics as part of their training, and quantum information and computation remains underrepresented in computer science as a discipline. Given all the awesome things conventional computers can do, it is not surprising that computer science focuses on the computers that already exist.

Physicists are less afraid of engaging in radical conceptual departures from the status quo. Many of the problems that quantum computers naturally address also arise from the physical sciences, in particular chemistry and physics.

Companies like Google and IBM are also trying to build quantum computers—what’s different about this group’s effort?

Google, IBM, D-Wave, and Rigetti Computing are all focused on approaches based on superconducting circuits. These circuits more closely resemble the silicon chips that they are familiar with—they are integrated circuits made by the same processes as the chip in your phone, but from different materials.

Our approach focuses on ion trap quantum computers, which are quite distinct from the superconducting circuits approaches. For example, all ions are guaranteed identical, whereas superconducting qubits are manufactured and are therefore all slightly different. However, we enjoy collaborations and collegial relations with all the groups aiming to build a fifty to one hundred qubit machine in the next five years. It is an ambitious goal, so it is good to have multiple approaches and share knowledge where we can.

What is the future potential for quantum computing? Is it computing that is many orders of magnitude faster than the fastest supercomputer now?