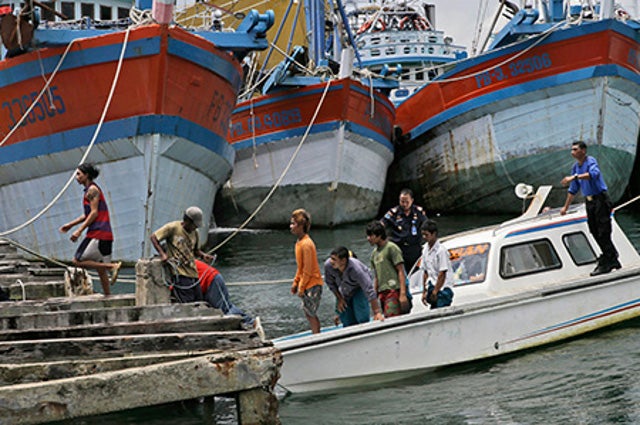 You’re about to make a sandwich with canned albacore tuna today, and thinking that it’s all a good thing—nutritionists talk about the health benefits of eating more seafood, after all. One thing you probably didn’t think about is where exactly that tuna come from.

For Jessica Sparks, that’s a crucial question. A 2014 graduate of the master’s in conservation medicine program at Cummings School and current program faculty member, she researches the links between overfishing and forced labor and slavery.

She’s found that fish-stock declines may lead to growth in slavery on the open seas—and, perversely, that forced labor reinforces the over-fishing that’s destroying the marine life in world’s oceans. She has made the research her calling, hoping it will lead to policies that better conserve marine populations worldwide and alleviate the plight of the many thousands of enslaved modern workers living in often brutal conditions.

Before coming to Tufts, Sparks was a clinical social worker working with child sexual-abuse victims, teenagers suspected of being trafficked for sex, and victims of mass acts of violence, among others. Burnt out after a decade of social work, she reached back to a childhood passion for wildlife conservation and came to Cummings School.

As part of the M.S. in conservation medicine program, Sparks did an externship in China, working with an expert in panda conservation. There, she learned of a doctoral program at the University of Denver in sustainability and global studies, with a concentration in conservation and social justice. Intrigued, Sparks thought it was a natural next step to build on the issues she studied at Cummings and her background in social work.

Just as she was starting the Ph.D. program, explosive investigative reports came out revealing how the fishing industry, especially in Southeast Asia, relied on modern-day slavery: men coerced or forced against their will to work in vast fishing fleets, sometimes for years on end.

The reports by the Associated Press (which won a Pulitzer for its investigations), the Guardian, and the Environmental Justice Foundation struck Sparks. “With my background dealing with victims of violence and trafficking, I decided I wanted to focus on this issue of marine ecosystems,” she said. “I saw a real gap there and thought I could contribute to understanding it.” 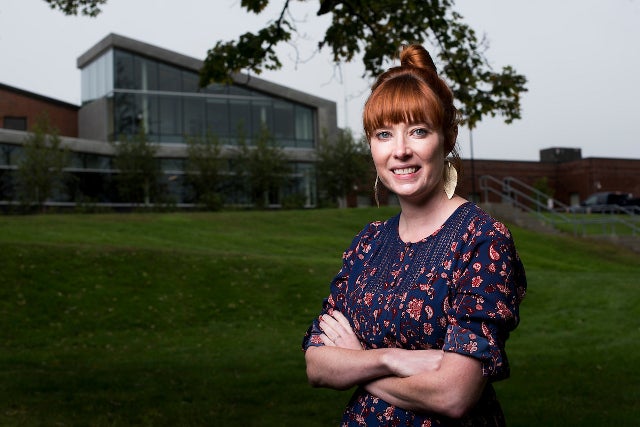 A recent study found that fishing “is only profitable with government subsidies or if they use forced labor—slavery,” said Jessica Sparks, here in Grafton. The linkages go the other way, too: once fishing boat owners start using the forced labor, they suddenly are profitable and then “it’s not like they would stop using forced labor and go back to be being unprofitable.” Photo: Alonso Nichols
In this modern version of slavery, a middleman usually approaches men—such as poor villagers in Myanmar or Thailand—and offers them what seems to be a well-paying fishing job. The men incur debt to travel to the fishing vessel, and all of a sudden they are incurring more debt for food and lodging.

“That’s called debt bondage,” said Sparks. “There are stories of fisherman being out at sea for five to ten years, without ever setting foot on land, getting transferred from one vessel to another at sea. There’s a lot of physical violence, sexual violence, mental violence—people getting thrown overboard to fish for sharks.”

At the same time, reports have been steadily coming out about the degradation of marine life, in large part due to overfishing. According to the UN Food and Agriculture Organization (FAO), around 90 percent of the world’s fish stocks are fully or overfished, with even more fish production expected. Some 40 percent of widely eaten species such as tuna are now being caught unsustainably, the FAO said in 2016.

When there are too few fish to catch in a region, many fishing vessels move on. But not all do. “Common sense would say that as fish stocks decline, you would fish less,” said Sparks. “But it turns out that is actually not the response.”

Instead, some fishing businesses vessels stay out at sea longer, farther from shore in deeper waters, and sometimes even use different fishing gear to maintain their yields, Sparks said. That increases production costs. And all those costs are fixed, with one exception: labor.

In fact, a recent University of British Columbia study found that fishing “is only profitable with government subsidies or if they use forced labor—slavery.” The linkages go the other way, too: once fishing boat owners start using the forced labor, they suddenly are profitable and then “it’s not like they would stop using forced labor and go back to be being unprofitable,” Sparks said.

And all that extra fishing with forced labor has a hugely detrimental effect on fish stocks, which are stressed sometimes to the point of population collapse.

The question then becomes: what to do? “We need policies at the international, national, regional, and local levels” that address the intersection of fisheries depletion and forced labor, said Sparks.

“For example, in a lot of places around the world, the fisheries officers can board a vessel to investigate for illegal fishing, but they won’t communicate with the crew or ask the crew about labor-abuse issues, because it’s out of the scope of their purview.”

One positive outcome of her research, Sparks said, would be advocating movement toward policies “that address social and ecological problems, rather than both in isolation,” she said. She’s getting ready to do just that. Since she finished her thesis and got her Ph.D. this summer, Sparks has been busy preparing papers for publication based on her dissertation data.

In addition to teaching research methods on Tufts’ Grafton campus, Sparks soon will be working as a research fellow at the Antislavery Ecosystems Project at the University of Nottingham in England.

Part of the university’s Rights Lab, whose research director is Professor Kevin Bales, author of Blood and Earth: Modern Slavery, Ecocide, and the Secret to Saving the World (Spiegel & Grau, 2016), the research group is “one of the only—and definitely the largest—human-rights research groups in the world now,” Sparks said. “They are looking at bidirectional links between environmental degradation and the use of slavery, predominantly forced labor.”

“We are very excited about Jess Sparks joining the Rights Lab,” said Bales. He noted that Sparks is at the forefront of her field, which is good, but upsets some traditionalists. “Recently, Jess and I tried to build collaboration with some fishery researchers in other European countries, but our project proposal based on Jess’s work was just too far ahead of the curve,” he said.

“Yes, fish conservation is important, but linking this to human rights, migration patterns, the pattern of global supply chains, and the quirky nature of a life at sea was too much for some academics,” Bales said. “And yet, these links both explain and point to solutions of inter-linked global problems like climate change, species loss, modern slavery, and conflict. Connecting dots to solve problems is what Jess Sparks does brilliantly.”

And what can we as consumers do to not contribute to the problems of overfishing and forced labor on the high seas? Though there are few tools that assess both environmental sustainability and fair labor practices, some organizations, such as Monterey Bay Aquarium’s Seafood Watch, have ones that help, said Sparks.

Otherwise, she recommends both following investigative journalists who track these issues and call out big name companies, and trying to eat fresh local seafood—making sure it isn’t labeled “previously frozen.” That’s a potential indicator, she said, “that the fish was processed in a different country, which would increase the risk of unfair and unethical labor practices.”