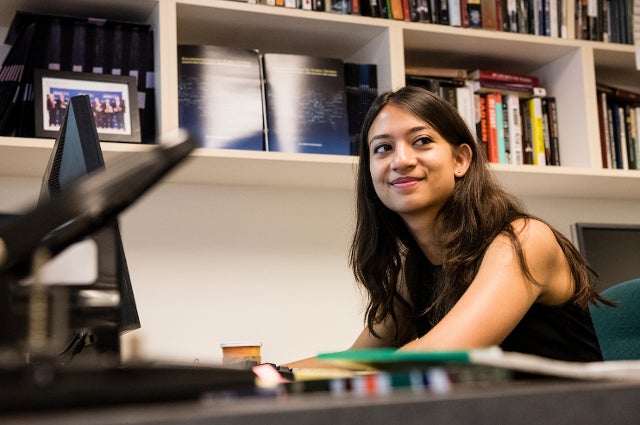 Benya Kraus, A18, still remembers the day two summers ago when she walked into a new house in a rough part of north Minneapolis. It had been built through a city economic development subsidy program and many neighbors showed up to celebrate the opening, part of the revitalization of a neighborhood that had been plagued by high crime and vacancy rates.

“It was beautiful to see people willing to put in the work, money, and time to build that house, which will have a ripple effect and transform the entire neighborhood,” said Kraus, who was interning as a Minneapolis Urban Scholar at the time for the city department that led the rebuilding effort.

The experience showed her firsthand the rewards of working in local government. “You see so immediately the impact you can have on someone’s life,” she said.

Today, Kraus is a founding member of the Chapel Hill-based startup Lead for America. Offering two-year fellowships that kick off with a month of training, including a week in Washington, D.C., the startup hopes to provide recent college grads with the skills, resources, and connections to work for local government and community agencies.

“We’re looking for people from a wide diversity of identities and experiences who feel a deep commitment to the idea of community, and who want to reinvest themselves and whatever skills and talents they have into local communities,” Kraus said.

An international relations major, Kraus had originally envisioned a different career trajectory for herself. “When I thought of where I wanted to go to make change, I wanted to be negotiating world peace,” said Kraus, who is also the youngest executive member on the Amnesty International U.S.A. board of directors.

But after her experience in Minneapolis, Kraus decided to focus on urban design in politically conflicted U.S. and foreign cities for her international relations senior capstone project, and began discussing her interest in local government work with a fellow Tufts classmate. “I slowly learned that in order for the global change that happens in fancy UN rooms to be enacted, the work needs to be done on a local level,” Kraus said.

Her classmate introduced Kraus via FaceTime to his friend Joe Nail, an undergrad at UNC Chapel Hill, opening the way for hours of conversations in which Kraus and Nail shared their frustration at local governments’ absence at college campus career fairs. It’s not easy to make one’s way into local government as a new college grad, Kraus said.

She had hoped to work in the Minneapolis city government, but couldn’t find a way in after graduating from Tufts. She ended up at a Boston company, but only a few months later was heading to Chapel Hill to join Nail and two other recent college graduates to lead their startup Lead for America. Tisch College of Civic Life is supporting the endeavor by funding Kraus’s first year’s salary.

Part of the process of finding jobs for recent grads has been partnering with local governments and community agencies and asking where they need help, which turns out to be everything from community relations and outreach work to staffing for work addressing the opioid crisis.

Another part has been trying to change the definition of success that so many young people have internalized. “Societally, we get this message that to succeed means to leave your community,” Kraus said. “We’re saying no, real success means learning about as many places as you can, but always taking what you learn back to the places and the people who have raised you.”

Lead for America began accepting applications in September for its pilot cohort of forty North Carolina fellows and ten “Hometown Fellows,” who will return to work in their hometowns across the country. The founding team members will be traveling to college campuses across the country to promote the program until the application deadline in February, and fellowships will begin in July.

Eventually, Kraus said, they hope to expand Lead for America to more states. “We’re envisioning this at the scale of tens of thousands of fellows. We want to stir up a movement,” she said. “The more we can build that concept of close relationships with the communities we come from, the stronger the foundation of our nation and the world will be.”