It’s the next wave of manufacturing, engineer Keith Moore, E85, tells a Tufts audience, affecting everything from medicine to consumer goods 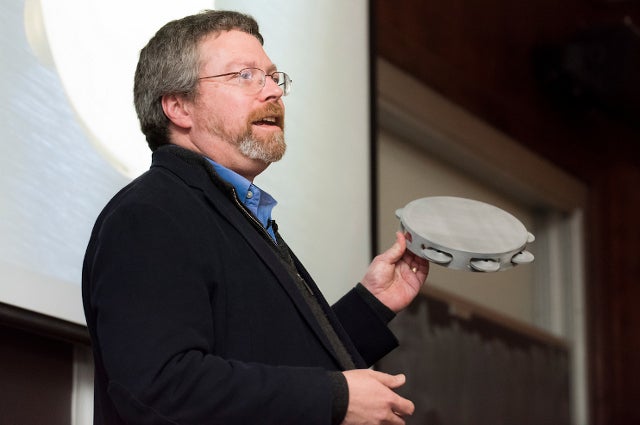 Advances in 3D printing are fundamentally changing the economics of manufacturing and creating new markets by producing parts that require no assembly, said Keith Moore, E85, vice president of research and development at HP Labs, on October 18 at the School of Engineering.

Moore, visiting the School of Engineering as part of the Engineering Dean’s Lecture series, described how 3D printing is revolutionizing medical, manufacturing, and consumer domains, and framed “compelling applications”—from hearing aids and dental implants to car parts and new kinds of fabrics—with a historical and philosophical perspective.

Noting that all inventions take time to mature, he said 3D printers at HP build on steady advances in inkjet thermal printing.

Pointing to an array of 3D printed products displayed on a nearby table—including a tambourine (“What we were really intrigued by was how thin the top could be”), an arm brace, and an ID holder—Moore said that “this is what happens when you have ink jet printers that can put down 30 million drops per inch. . . . Innovation is about the applications and who will use it. And it takes forever for an overnight success. It’s always a series of small innovations.” 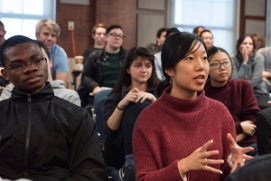 A student asks a question during the talk by Keith Moore. Photo: Alonso Nichols
If Moore has a particularly patient view of innovation, it’s because he’s seen firsthand how the seeds of new ideas are planted, nurtured, and taken successfully to the marketplace. He joined HP after graduating from Tufts with a degree in electrical engineering, and went on to earn a master’s in computer science from Stanford University.

He’s risen through the ranks to now lead the company’s Print Adjacencies and 3D Lab, where he and his team develop and research the underlying material science and microfluidics for HP’s polymer and metal 3D printing technologies. Prior to his current role, he was vice president of research and development for all of HP’s LaserJet and inkjet software.  He is also an inventor, with more than thirty-five patents and has seen his inventions ship in almost all HP LaserJet and commercial printing products.

While he said he can predict the future, he noted, “I just can’t tell you what year it will be.” 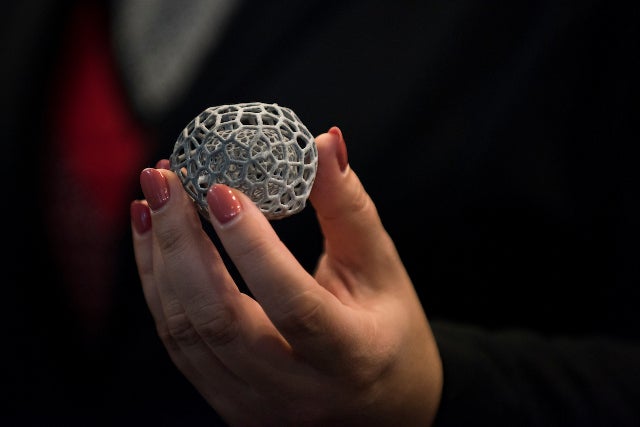 “This is what happens when you have ink jet printers that can put down 30 million drops per inch,” said Keith Moore of the many objects that can be printed, such as this model of a white blood cell. Photo: Alonso Nichols
The medical field has dramatically changed because of 3D printing, he said, noting its impact on dentistry—crowns, bridges, dentures, and implants—but also in brace technology and personalized orthotics, such as customized partial and total knee replacements.

Those specific applications in turn lead to ideas about how to push the potential for 3D printing even further in an era of “generational design.” He cited, for instance, the development of honeycomb patterns to retain strength and suppleness in various devices.

As a result, some products “are starting to look more like nature,” he said. As such, “3D is a huge opportunity for transformative design” and can help manufacturers figure out “how to get the lightest weight but the strongest structure.”

The rise of 3D printing also radically changes consumer goods, including distribution and supply chains. In that arena alone, 3D printing is “transformative,” he said. “Right now the model to make anything in the consumer world would be to print a million or 100,000 of these,” he said, holding up a snap that might be used on a backpack. 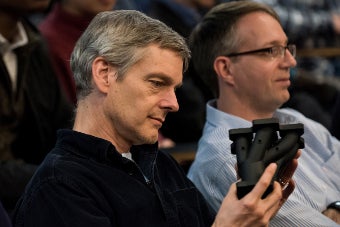 Chris Rogers, professor of mechanical engineering, examines a 3D printed fuel intake manifold during Keith Moore’s lecture. Photo: Alonso Nichols
“But you don’t have to,” he said. “And you don’t have to store it anymore. If you’re missing your dishwasher part, and you need to replace it, you just reprint it. So you’ll see more localized manufacturing.”

The far-reaching consequence, he said, will be on market distribution strategies. Remove the incentive to seek low-cost overseas labor—whose costs, he said, are largely associated with assembly—and the “economic nature of manufacturing” moves away from large-scale overseas production and from product storage in warehouses.

The technology of 3D printing meanwhile continues to achieve new levels of subtlety and is leading to wholly new materials. Qualities such as surface texture, translucency, and conductivity can all be modified to optimize strength, stiffness, and elasticity.

He described, for instance, how 3D printing can create an object that’s as solid as a hammer, but also an object as light and fluid as a feather or even a fabric that behaves similarly to a snakeskin.

“You can see where this going,” he said. “We can build these unbelievably structures that bend and blend and flow.” But even as this versatility emerges, scientists and engineers are grappling with how to talk about them, he said.

“We need a whole new language to be able to talk about what we’re doing,” he said. “We have a problem. If you’re looking for your Ph.D. thesis and haven’t figured it out yet,” he told the audience largely filled with engineering students, “boy do I have a few for you.”

Diverse expertise in material science and data modeling, among other fields, will be needed to take 3D printing further, he said. “It’s an entirely new wave of manufacturing coming at us and it’s a huge opportunity for biologists, chemists, engineers—we have a very interdisciplinary team,” he said. “When you go to a company, look at how they work and what they value.”

Moore briefly chronicled the evolution of HP Laboratories, which famously began more than seventy-five years ago in a garage in Palo Alto, California, where William Hewlett and David Packard made their first instrument, an audio oscillator used for testing sound equipment.

Printers were initially considered an “adjacency” to computers, Moore said, and yet, with steady investments in their potential to print faster, they have become key drivers of what is known as additive manufacturing.

“The speed of our printers has doubled every two years for the last thirty years,” Moore said. “Most people began to understand what was going on with inkjet roughly in 2000—they could see what it was doing to the industry itself.”

“You will do something fundamental, and then years later it will have changed the world,” he said. For any invention, “it’s often a decade to half a decade before you’ll see it in market, even in industrial research. So don’t lose hope when you have your [idea] delayed and no one is paying much attention at the beginning. It takes [time] to create that spark.”