Scaredy Cats (and Dogs and More)

Petrifying? Dressed to the nine lives? Which companion animal will win the coveted title of best Halloween costume? 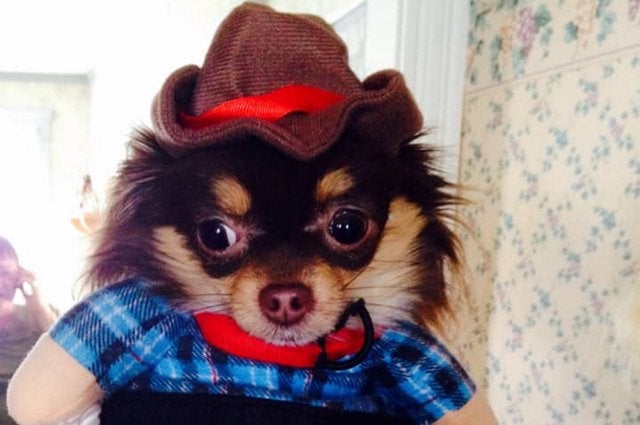 The rewards, while practical and tasty, are modest: $15 and $10 gift cards to be spent at the Elms Café on Cummings School of Veterinary Medicine’s Grafton campus. But competition in the café’s fifth annual Halloween Pet Photo Contest is absolutely fierce.

Who should take home top honors as the holiday’s best outfitted pet? Poppy, the tarantula wearing a witch’s hat? Sprocket and Ratchet, two dogs teaming up in an homage to Stranger Things? The cats, Kira and Simba? (Well, because try making cats do anything.)

Read the back stories on some of the great shots below—and then see all the entries and weigh in with your likes and comments over on Elms Café and Catering’s Facebook page. 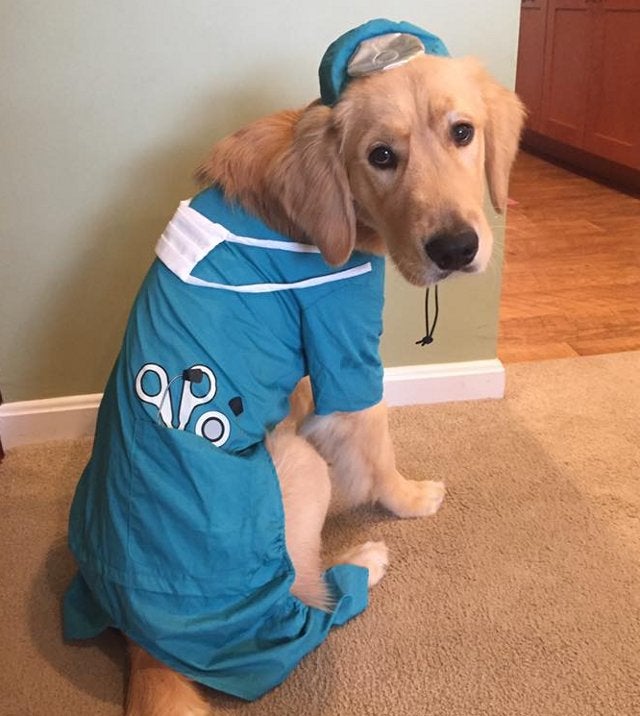 Third-year veterinary student Alyssa Tomcho brings Azure, a service-dog-in-training, with her to Cummings School every day. “He’s learning to be a doctor (or dogtor) just like me,” she said. Tomcho will foster and raise Azure until he’s ready to become someone’s service dog through 4 Paws for Ability. Photo: Alyssa Tomcho 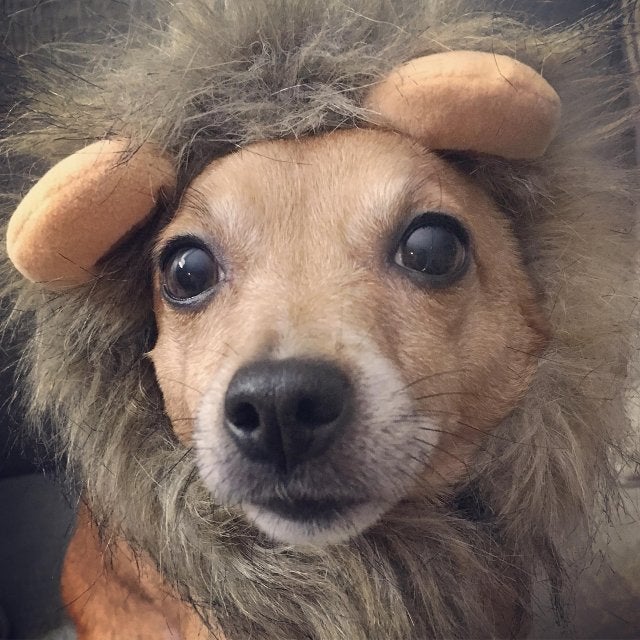 Bella’s costume actually belongs to a cat named Fred, owned by the roommate of second-year veterinary student Rafaella Susara. “We were talking about The Lion King one night at dinner,” said Susara, “and she brought out Fred’s lion mane costume, and it was an instant photo op for Bella.” Photo: Rafaella Susara 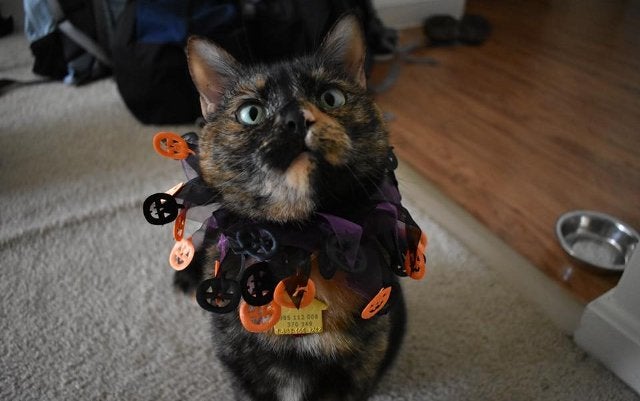 Fourth-year veterinary student Samantha Palermo entered both her cats in the contest this year (see also Simba, below). “My cats are pretty photogenic, so it wasn’t terribly hard to get the photos. I have over 6,000 photos of my cats in their three years of life.” Photo: Samantha Palermo 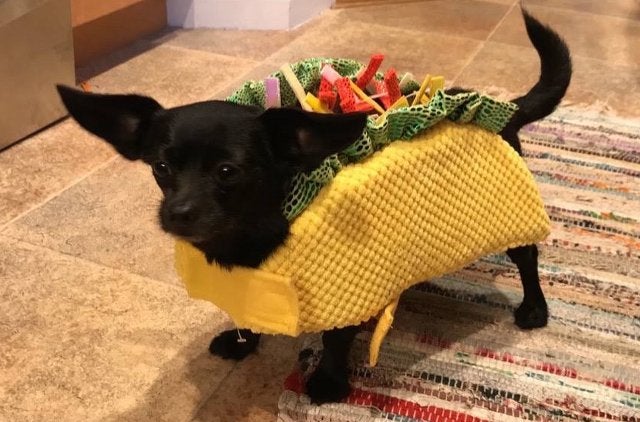 Second-year student Rebecca Dreizen said she chose this costume not just because she loves tacos (she does), but also because it’s a nod to her dog’s Mexican heritage. “Marley is part Chihuahua.” Photo: Rebecca Dreizen

Melody as Batman in the Batmobile 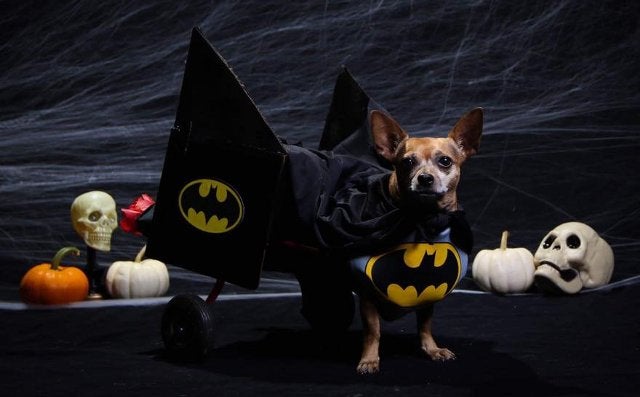 Emily Perry, a veterinary technician in Cummings Veterinary Medical Center’s radiology department, was inspired by her dog’s wheelchair. She said she was considering “how to be creative with her cart” when she “saw the Batman costume, and it just hit me!” Photo: Caitlin Vin Vliet 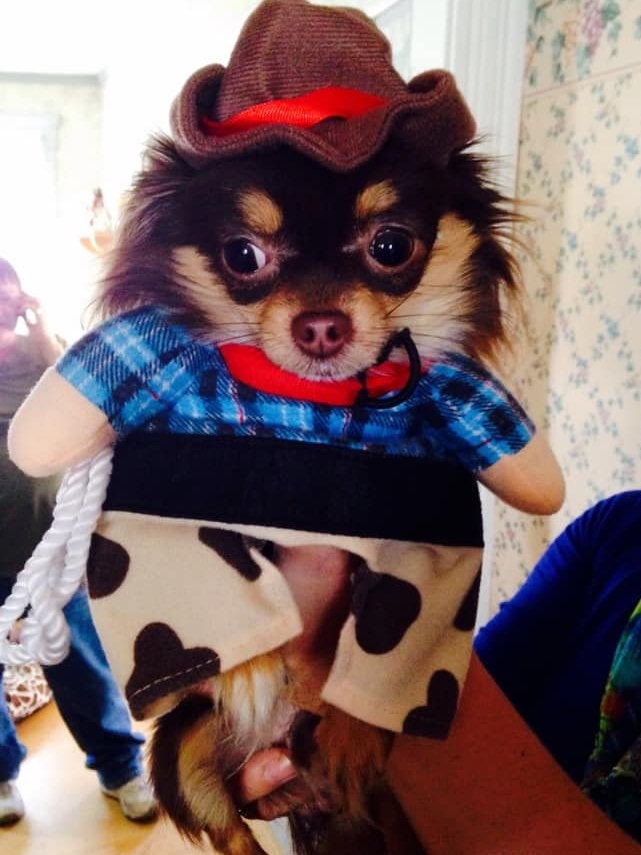 Erica Fontaine, an emergency and critical care veterinary technician supervisor at the Henry and Lois Foster Hospital for Small Animals, says she went with a Western theme because of this costume’s size. “It was one of the few that I found that was tiny enough, and I thought the little arms on it made it look hilarious on him.” Photo: Erica Fontaine 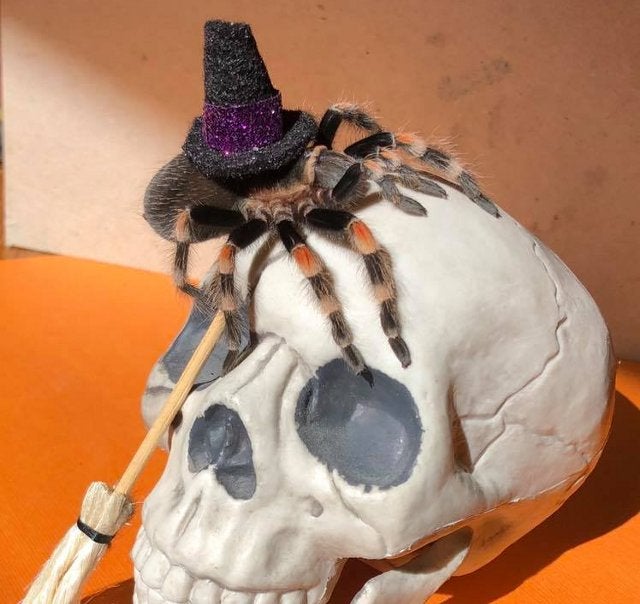 “Poppy is a very docile and—as you can tell from the hat on her—very tolerant Mexican red knee tarantula,” says her owner, third-year veterinary student Alexandra Riehl. “By gently tapping the back of her legs, I was able to coax her onto the skull and lightly position her hat. I wanted to dress Poppy up for Halloween to show people that tarantulas may be spooky, but they can also be cute.” Photo: Alexandra Riehl

DJ Roomba, Tabitha, and Trixie in the Rabbits’ Halloween Pageant 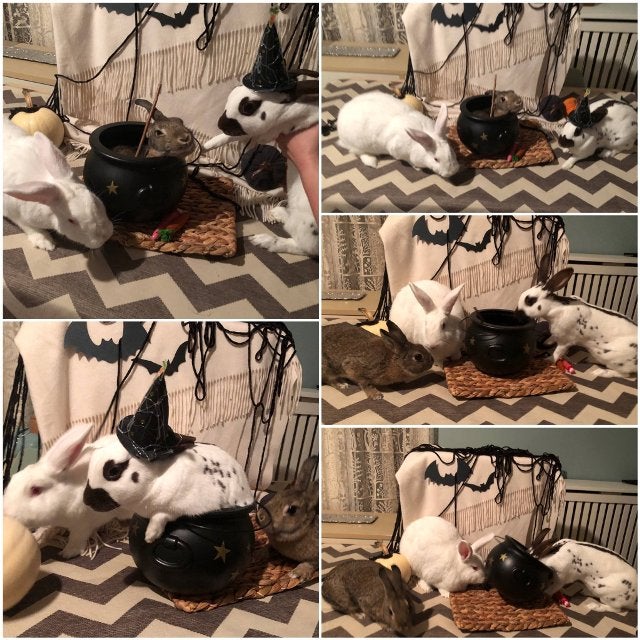 Third-year student Betsy Hartman said she envisioned DJ Roomba (the big white rabbit) in the pot, with Tabitha (white with brown spots and racing stripe) wearing a witch hat and stirring the cauldron, while Trixie (the brown rabbit) looked on. Of course, “the buns didn’t see my artistic vision, so I let them improvise their own. Rabbits aren’t the most malleable creatures, and my rabbits in particular have many strongly held opinions!” Photo: Betsy Hartman (with rabbit wrangling and bribery by husband, Jeff Hartman) 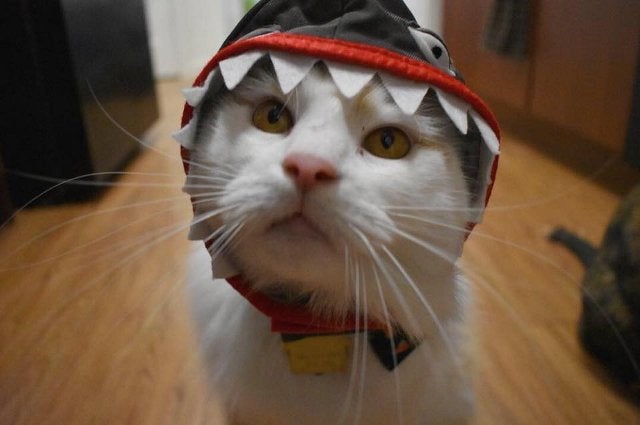 Fourth-year veterinary student Samantha Palermo entered two cats in the contest this year (see Kira, above). She found their costumes in a craft store, of all places. “The shark one really got me excited,” she said. Photo: Samantha Palermo 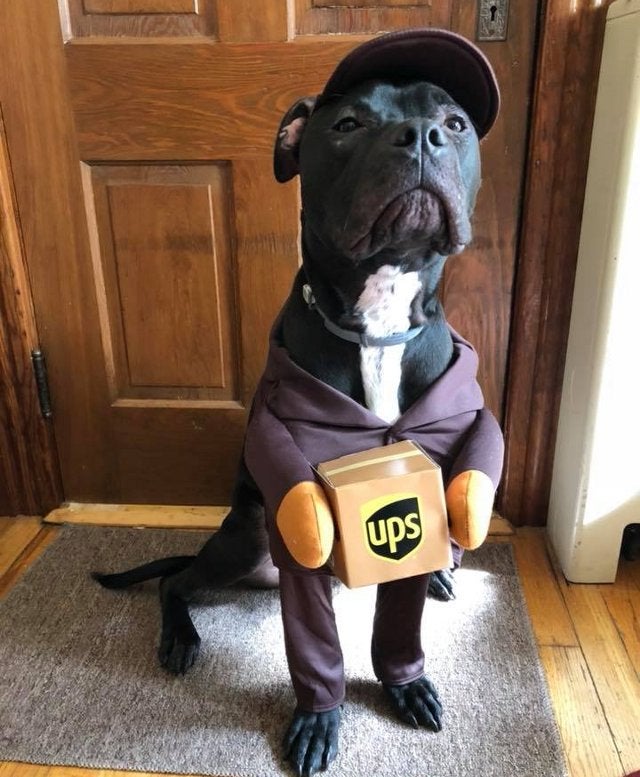 A third-year student pursuing a D.V.M. combined with an M.S. in public health at Tufts, Katey Aleis Durbin chose his costume in honor of her father, who has been a UPS driver in Ohio all her life. “He is getting close to retirement—which is bittersweet for us—so I sent him the original photo to cheer him up.” Photo: Katey Aleis Durbin 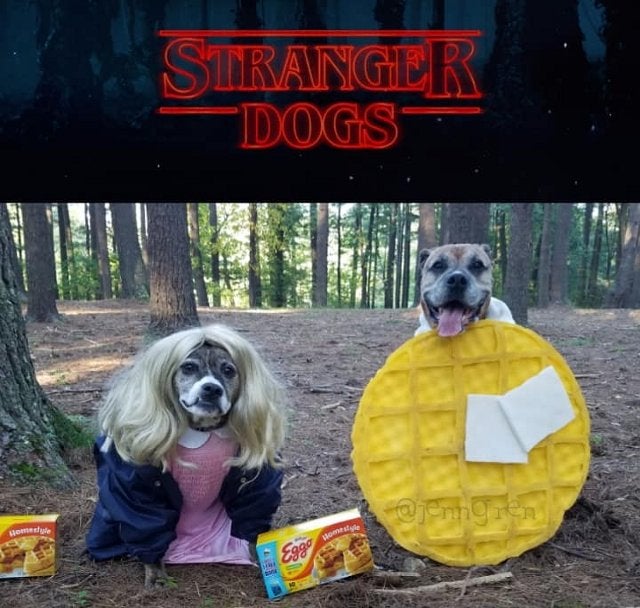 Cummings Veterinary Medical Center client and fan Jen Gren is also a big fan of the Netflix series Stranger Things. Given how treat- and praise-motivated her pets are, “we often participate in costume contests for fun,” said Gren. “They know they will only spend five minutes max dressed up, so it’s all in good fun.” (The dogs previously have done turns in “Barking Mad,” a play on the HBO series Breaking Bad, and “Stephen King’s Pit,” an homage to It.) Photo: Jenn Gren 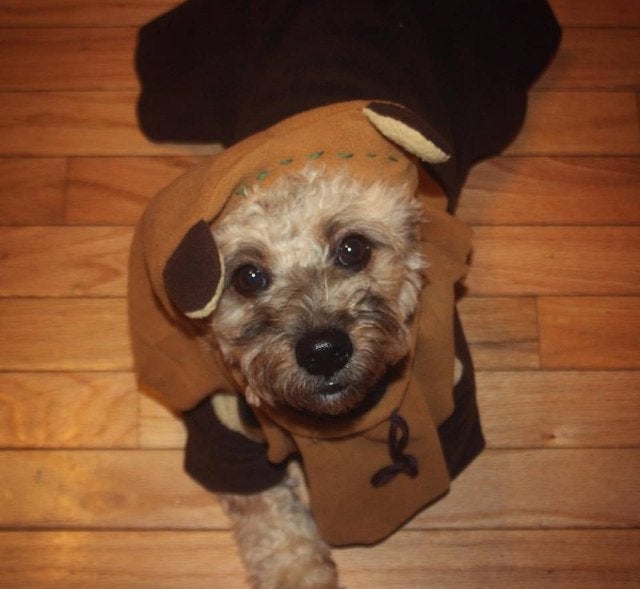 Second-year veterinary student Katie Clark said she went with this costume because “I’m a Star Wars fan” and “when Sadie’s hair starts to grow out, she actually does look like an Ewok.” Photo: Katie Clark