The Way to Save the Planet 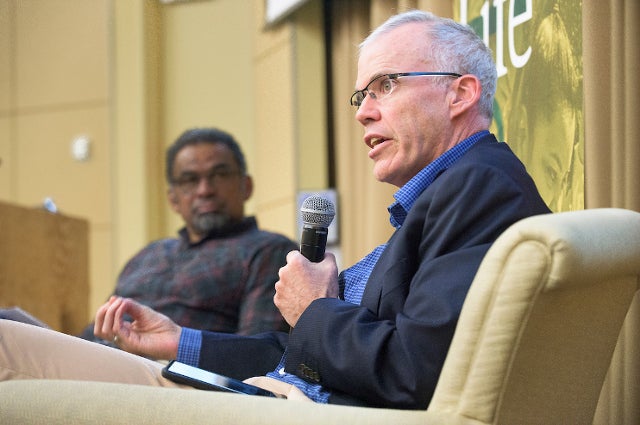 So what can the average individual do? Bill McKibben—the writer, environmentalist, and activist—has this advice: Be part of the climate movement.

McKibben, speaking to a standing-room crowd at Tufts on October 30 as part the Distinguished Speaker Series hosted by the Jonathan M. Tisch College of Civic Leadership, is a founder of 350.org, the first global, grassroots climate change movement, which has organized some 20,000 rallies around the world. The 2013 winner of the Gandhi Prize and the Thomas Merton Prize, McKibben was named to Foreign Policy’s list of the world’s one hundred most important global thinkers, and the Boston Globe deemed him “probably America’s most important environmentalist.”

In a conversation moderated by Julian Agyeman, a Tufts professor of urban and environmental policy and planning, McKibben, the Schumann Distinguished Scholar in Environmental Studies at Middlebury College, said the sheer urgency of climate change forces a profound shift in how people think about a lasting solution.

While the rise of carbon-reducing tactics such as installing solar panels, driving electric cars, and purchasing local, fresh food, are important tactics to reducing carbon emissions, they are “no longer the solution” in light of the worsening threats to the planet brought by rising global temperatures, McKibben said.

“Those are all good things, but I do not try to fool myself that that is how we’re going to solve global warming,” he said. “The most important thing an individual can do is be less of an individual. Join together with other people in movements large enough to effect changes in policy and economics that might actually move the system enough to matter. You can’t do it anymore, one lightbulb, one vegan dinner, at a time.”

That doesn’t mean we shouldn’t do those things, he noted. “But don’t do them thinking you have done your duty. What we need you to be is effective citizens moving policy. Citizenship is something we’ve not been best at in this country in recent years, and we’re paying the price in a number of places, but the most obvious are what we’re doing to the physical systems of the Earth.” Movements, he said, “are the one way we have of standing up” to the “unjust and entrenched.”

McKibben was asked if the United Nations’ recent Special Report on Global Warming will be the “kick in the butt” that the world needs to take climate change seriously. It warns that uncurbed greenhouse gas emissions will lead to a world assaulted by coastal flooding, drought, poverty, food shortages, and a mass die-off of coral reefs as soon as 2040. 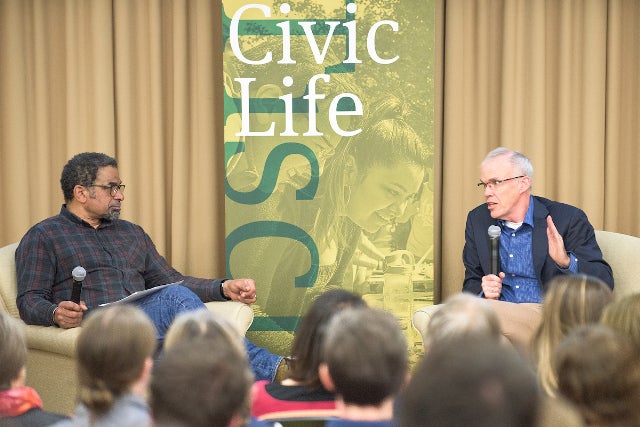 “The prize for movements in the end is changing the zietgeist—changing what people perceive as obvious and actual and normal and what’s coming next,” said Bill McKibben, here with Julian Agyeman. “We’re on the verge of that. We’re going to win that fight. The thing that haunts me is whether we’re going to win it in time or not.” Photo: Alonso Nichols
McKibben noted that the report is the fifth in a series of reports drawing attention to climate change—the first was published in 1995—but that this one stands out by putting emphasis on a “definite time limit” in which action must be taken.

“We’ve got a dozen years, as they say, to make radical transformations, or we’re not going to achieve even the modest goals that the global community has agreed on,” he said. “I don’t worry that that scares people. What scares me is people not being scared of climate change.”

The report’s message may have gotten through this time, he added, “perhaps because there is no possible way one could read that and think, oh, well some of our political leaders will take care of it. Clearly, they have no interest in taking care of it, and so we’re going to have to do those things ourselves. We’re going to have to build those movements, push for that action.”

Agyeman recalled purchasing McKibben’s 1989 book The End of Nature, regarded as the first book for a general audience about climate change. McKibben, a former staff writer for the New Yorker, said it was as a journalist that he realized climate change “was the most important story on the planet and that no one had written about it in this way was enticing.”

“I had been reading the early science on climate change,” he recalled, while living in the Adirondacks. “The book was half reporting on the science of climate change and half a kind of lay-theological-amateur-philosophical essay about how it all made me feel, which was mostly sad, that this wilderness that I was deeply in love with could no longer be safely described as wild. It’s existence had been changed dramatically by people.”

Asked about a recent op-ed of his in the Los Angeles Times that called for “climate civil disobedience,” McKibben said that it is one of the tools in the activist’s toolbox. But he warned that “you don’t want to use any of [the tools] over and over, because like any tool, they get dull. But civil disobedience is a very important part of every twentieth-century movement that actually changed the zeitgeist, because it’s a way that we underline the moral urgency of things.”

McKibben, who helped launch the fossil fuel divestment movement, also had strong criticism for fossil fuel corporations that, despite internal research in the 1980s that showed the carbon emissions contributing to a warming planet, “spent immense amounts of money building the architecture of deceit, denial, and disinformation that has kept us locked in this pointless debate about climate change,” he said.

“What they did was lie. What they did would get any student at Tufts who did that kicked out of here for lying and cheating,” McKibben said. “And the idea that that hasn’t been enough to get the powers that be at Tufts to kick these guys out of their investment portfolio is maddening. . . . If we’re not able to take even easy, modest steps like that, it’s too much to hope that we will do anything difficult.”

McKibben, in response to an audience member’s question about maintaining optimism even amid apparent failures of climate activism, stressed that civil disobedience often doesn’t achieve immediate results. But it’s important “to just keep repeating those messages over and over again,” he said. “That’s one of the reasons that civil disobedience [efforts] can be important. They keep them in front of people and convince people of their seriousness.”

Even when there are no clear victories, he said, activists can exact a high price on corporations. “We started the Keystone [resistance] seven years ago—it was the first time anybody ever stood up to the fossil fuel industry,” he said. “They were unconcerned about it . . . until 1,200 people went to jail and those 1,200 people catalyzed people resisting in a thousand other ways—huge demonstrations, endless letter-writing campaigns . . . cultural resistance of all kinds.” The result so far, he noted, is that the pipeline has not yet been built.

Another result was that “every single thing that the fossil fuel industry now does gets fought, and fought hard.” He cited the “kayak-tivists” who clogged Seattle harbor in 2015, blocking Shell’s oil rigs from going to drill in the Arctic as another example. “The prize for movements in the end is not particular victories. The prize for movements in the end is changing the zietgeist—changing what people perceive as obvious and actual and normal and what’s coming next. We’re on the verge of that. We’re going to win that fight. The question in my mind is—the thing that haunts me—is whether we’re going to win it in time or not.”

Toward the end of the program, McKibben noted that he was “glad to be here at this school that takes civic life as its watchword. I’m not going to tell you that we’re going to win this fight, because I don’t know. Nobody knows,” he said. “This is a different kind of fight than we’ve been in before. Martin Luther King, Jr. was always able to end a speech confidently, ‘The arc of the universe is long, but it bends towards justice.’ We don’t have that luxury in this particular fight. The arc of the physical universe appears to be fairly short and to bend toward heat. And if we don’t win this fight soon, then we will not win it. That’s why the urgency is very real, and it’s why I do what I do every day.”