Is Spanking Ever Right? Pediatricians Say No

Is it ever good to spank your children—or shame or humiliate them—to try and correct their behavior? The new answer from the American Academy of Pediatrics is an unequivocal “no.”

In a policy statement co-written by Robert Sege, a professor of medicine and pediatrics at the Tufts School of Medicine, the pediatricians group updated its recommendation from some twenty years ago, and spells out the reasons why using positive behavioral approaches is not only the ethical approach, but the only effective way to discipline children.

Sege, a pediatrician whose research focuses on how child abuse and neglect can be prevented, has long been interested in these policy issues and was tapped, along with Benjamin Siegel from Boston University, by the Academy to rewrite its guidance on corporal punishment of children.

“I think that once you get through all the science and all of the data, the realization that you come to is that there is simply no need to inject fear and violence into the most important loving relationship that any of us ever have—the relationship between parents and children,” Sege said.

The good news is that the younger generation of parents across America seem to know that and are opposed to spanking children.

Tufts Now reached out to Sege to learn more about the background for the policy, reaction to it, and advice on positive approaches to disciplining children.

Tufts Now: Why did the American Academy of Pediatrics policy become much more clear and definite about opposing spanking and verbal abuse?

Robert Sege: What changed in the past twenty years is that we have much better evidence. We are now able to do long-term longitudinal studies, we have better measures of child behavior, we have MRI 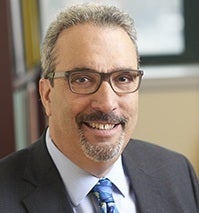 Robert Sege
scanners to look at children’s brains. From the medical point of view, we now have much better ways of understanding the relationships between childhood experiences and their behaviors. The weight of those studies has really demonstrated the importance of using positive methods to teach children right from wrong, rather than using corporal punishment or shaming or humiliating a child.

Why is spanking or any form of corporal punishment bad for children?

Studies of children who have experienced consistent corporal punishment or shaming and humiliation show that the prefrontal cortex, the part of their brains that is responsible for self-regulation, is diminished in size. Other studies have shown those kids have increased activation of the adrenocortical axis—basically your fight or flight reflexes—causing fundamental changes in their physiology.

Is it effective as a punishment?

The evidence shows that children exposed to corporal punishment become more oppositional, which of course is not what parents want, and which leads to more punishment. We see kids’ behaviors often escalate.

There are a number of studies that show it isn’t effective, because what you are really trying to do with your kids is to teach them to internally regulate right from wrong.  Corporal punishment,  shame, or humiliation tends to make children avoid punishment, which is a very different skill.

Has the level of parental violence against children been diminishing over time?

If you look at the history of the past few decades, we have become much less accepting of violence within loving relationships. The change in intimate partner violence—in terms of attitudes, tolerance and beliefs—that we’ve seen over the last generation is extraordinary, which is for the good, and I think we are seeing the same understanding in how we treat our children.

Are the changing attitudes toward corporal punishment and shaming of children in America across the board—or more regional?

It’s across the board. We cited survey work done in 2016 by YouGov.com, which the CDC shared with us, that shows people who have a child in the home who is less than five years old—regardless if they are black, white, or Hispanic—seldom or never spank their children. That’s very different from people who are over forty. There are other studies as well that came to similar conclusions.

Since the policy has come out a couple of weeks ago, there has been a lot of public discussion about it. What I’ve heard and read online is that most Americans agree with this policy, and the ones who don’t are often older. It’s very interesting that we are seeing a generational shift, which I think is much for the better.

The goal of what we do in pediatrics, when we talk with families about their children’s behavior, isn’t necessarily to change the parents’ values and beliefs, but to change their practices. What we know is that people who do spank their children often do it as a last resort. There are so many ways to not get to that last resort.

Can you elaborate on some of those positive parenting practices?

It all depends on the child’s age, of course. With an infant who has just learned to crawl, you pick them up, turned them around, and they will crawl the other direction—or pick them up and they will smile at you. A six month old cannot learn a rule, of course—it’s not going to happen.

A favorite story from my practice is about a three-year-old picky eater. His mom described doing all sort of things to get him to eat, ending up chasing him around the apartment with a spoon. I asked her what he does then. It turns out he laughs. I told her he’s a brilliant child—he’s invented a game that he can play every day, and the object of the game is get mom to run around the apartment with him. Once you put yourself in the child’s head, you have a different kind of problem solving.

And what about older kids?

They should experience the natural consequences of what they are doing. If you have a nine year old who stays up late playing video games and doesn’t get his homework done, it’s not your repsonsibility to wake him up early in the morning to do his homework—or god forbid do it yourself. Say to him, “You got a zero on that homework; why did you think that happened?” Help them to come to their own conclusions.

The goal of parenting isn’t that particular homework assignment—it’s to teach a child to delay gratification and do what they need to do. Parents can be wonderful coaches for that.

What do you say to parents who say that spanking is the only punishment that works on their child?

Most often this type of comment comes in the context of a parent describing a persistent behavior problem—and “nothing works.” In those situations, we can often help them problem solve and figure out a way to change the behavior. When parents need more than we can provide in a pediatrician’s office, there are other resources available to help them learn more effective parenting practices.